Long before Chick-fil-A became known for its solid customer service and closed-on-Sunday stance, the restaurant rose from humble beginnings as a small diner outside of Atlanta, Georgia.

Over 75 years later, it’s become one of the largest family-owned restaurant chains in the U.S.

Chick-fil-A has also been named the No. 1 fast-food spot for customer satisfaction for seven straight years, holding onto its crown among other closely-ranked competitors like Domino’s, KFC and Starbucks.

So how did the chain go from a small suburban diner to what it is today? Here’s a look at Chick-fil-A’s history:

Chick-fil-A founder Samuel Truett Cathy and his brother Ben opened a small 24-hour diner called the Dwarf Grill on May 23, 1946, in Hapeville, Georgia, according to the Georgia Historical Society. It was later renamed the Dwarf House.

The brothers opened the diner in a location across from a Ford Motor Company assembly plant and near the Atlanta airport, seeking to lure a built-in customer base of area workers. But tragedy struck in 1949 when Ben Cathy and another brother were killed in a plane crash, according to the historical society.

Truett Cathy and his wife Jeanette continued to run the restaurant and later opened a second Dwarf House in the neighboring city of Forest Park in 1951, the Atlanta Journal-Constitution reported.

The original 1946 space only had a capacity for 10 stools and four booths, and by 1967, the restaurant was replaced with a larger structure to meet demand.

The 1967 Dwarf House structure remained until 2021 when a months-long renovation process began. A newly designed and expanded Dwarf House reopened in early 2022, allowing fans in Hapeville the chance to visit both the full-service restaurant, and experience the company’s history and see 1960s artifacts from the original building.

"Remembering his mother’s method of cooking fried chicken with a heavy top that trapped the heat and moisture, Cathy tried cooking boneless chicken breasts in a pressure cooker," the historical society explained.

And the experiment was a success: He found he could cook a piece of boneless chicken in a fraction of the time it would take to cook the chicken in a pan or on the grill.

He continued years of trial and error with different seasonings and breading. Truett Cathy would ask his customers to taste the chicken sandwich and give feedback, the historical society said.

Finally, in 1964, Truett Cathy came upon the right mix of more than 20 seasonings and it became the original chicken sandwich with two pickles on a toasted butter bun — which is now widely considered to be the first-ever fried chicken breast sandwich, according to the company’s history page. 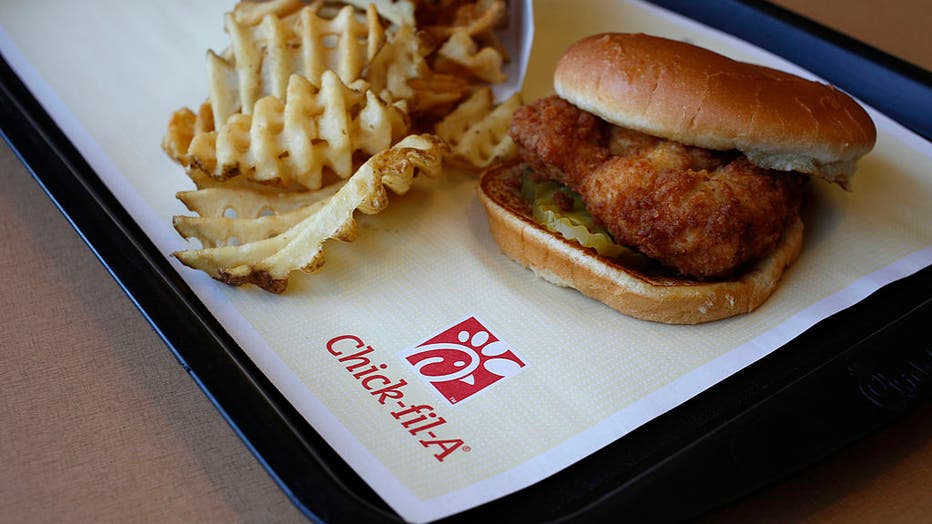 An original chicken sandwich and waffle fries are arranged for a photograph at a Chick-fil-A Inc. restaurant in Bowling Green, Kentucky, on Mar. 25, 2014. Photographer: Luke Sharrett/Bloomberg via Getty Images

The recipe remains unchanged and is still used to this day at Chick-fil-A restaurants. In fact, the secret recipe is hidden in a safe at its Atlanta headquarters, according to the historical society. 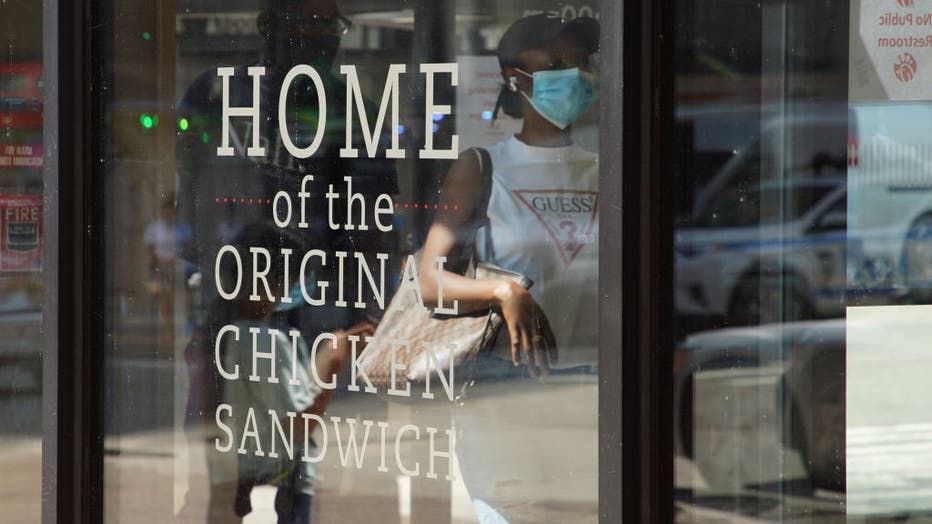 FILE IMAGE - A person wearing a protective face mask walks past a sign "Home of the original chicken sandwich" as she enters a Chick-fil-A restaurant in Midtown Manhattan on Aug. 5, 2020, in New York, New York. (Photo by Rob Kim/Getty Images)

Truett Cathy’s chicken sandwich started outselling hamburgers and became so popular at the Dwarf House that he eventually sought out an attorney to trademark the sandwich in 1963. At first, he started selling the chicken sandwich as a licensed product to other restaurants, according to the historical society — but it was difficult to ensure they used his same standards.

So, the first Chick-fil-A restaurant opened on Nov. 24, 1967, in Atlanta’s Greenbriar Mall. Customers can visit the mall’s Chick-fil-A still to this day.

"Serving a breaded, boneless chicken breast between two buttered buns is a seemingly simple idea–but it was a novelty for its time," the mall’s restaurant page writes.

Putting a restaurant inside malls was a relatively new idea, the Georgia Historical Society explained. Truett Cathy had to convince mall owners that having a restaurant "would not create smoke in the mall or result in a lot of trash."

Doris Williams, who was running a school cafeteria, was picked to operate the first restaurant.

Where did the Chick-fil-A name come from?

When Chick-fil-A first opened its doors in 1967, Truett Cathy was looking for a name to reflect its "top quality customers should expect each time they visited a restaurant," the company said. The trademark attorney he sought out in the early 1960s had also encouraged him to think of a unique name.

He ultimately chose Chick-fil-A: "Chick" to represent the restaurant’s signature menu item, and "fil-A" as a play on the word "filet" but with a small twist.

He replaced "et" with "A" to represent the "Grade-A" quality of chicken, the company said.

Truett Cathy opted for a "slow growth model," opening more stores in malls without accumulating much debt, according to the historical society.

"It was a much cheaper investment to open a small restaurant in a mall than to purchase land and build a free-standing restaurant," it explained.

But as mall development slowed in the 1980s, Chick-fil-A turned to free-standing restaurants and opened its first such location in 1986 in Atlanta. The first drive-thru-only restaurant opened in 1993 in Greenville, South Carolina.

Today, there are more than 2,600 restaurants spanning coast-to-coast.

Chick-fil-A operates with a licensed restaurant model, allowing the company to contract with large food companies to open restaurants on college campuses, in airports, office buildings and more. 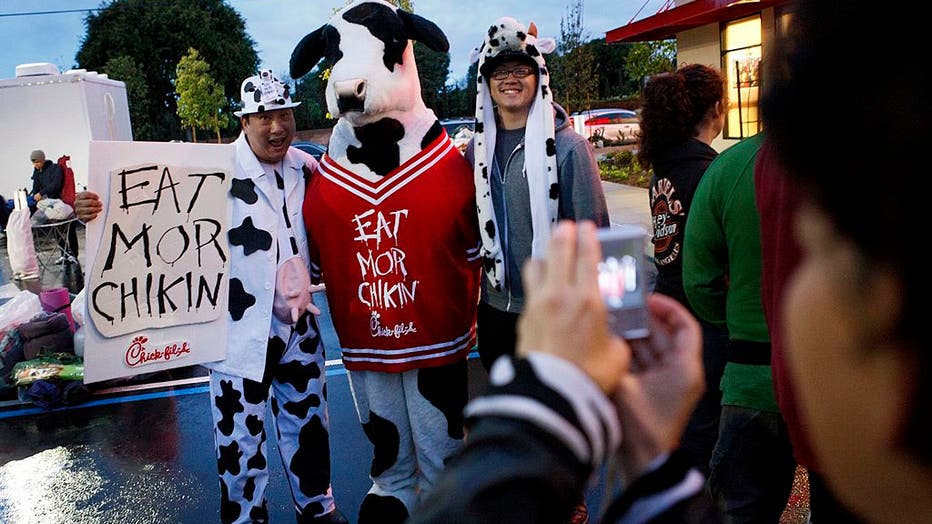 FILE - Customers stand for a photograph with a Chick-fil-A Inc. mascot during the grand opening of the company's restaurant in Costa Mesa, California, on April 26, 2012. Photographer: Patrick Fallon/Bloomberg via Getty Images

In 1996, Chick-fil-A became the first title sponsor for the Chick-fil-A Peach Bowl, the ninth-oldest bowl game in the country, and has since been a part of other sports sponsorships. 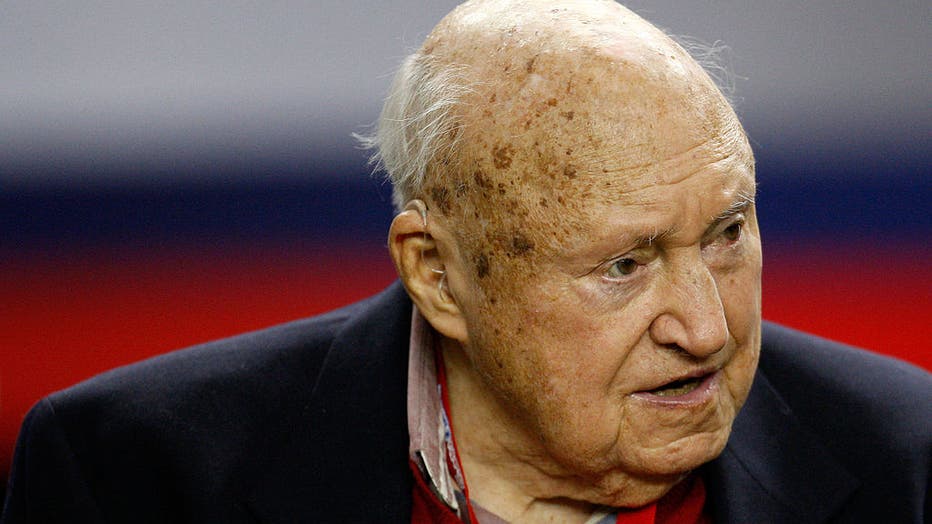 Chick-Fil-A founder Truett Cathy watches the action on the field during the Chick-Fil-A Bowl between the Virginia Tech Hokies and the Tennessee Volunteers at the Georgia Dome on Dec. 31, 2009, in Atlanta, Georgia. (Photo by Mike Zarrilli/Getty Images

Chick-fil-A had reached over $2 billion in system-wide sales by 2006. A decade later, total sales climbed to $8 billion, the historical society said.

Any fan of Chick-fil-A knows that the restaurant chain is closed on Sundays. It’s actually been a policy since Truett Cathy opened the Dwarf Grill in the 1940s, based on his Christian faith. 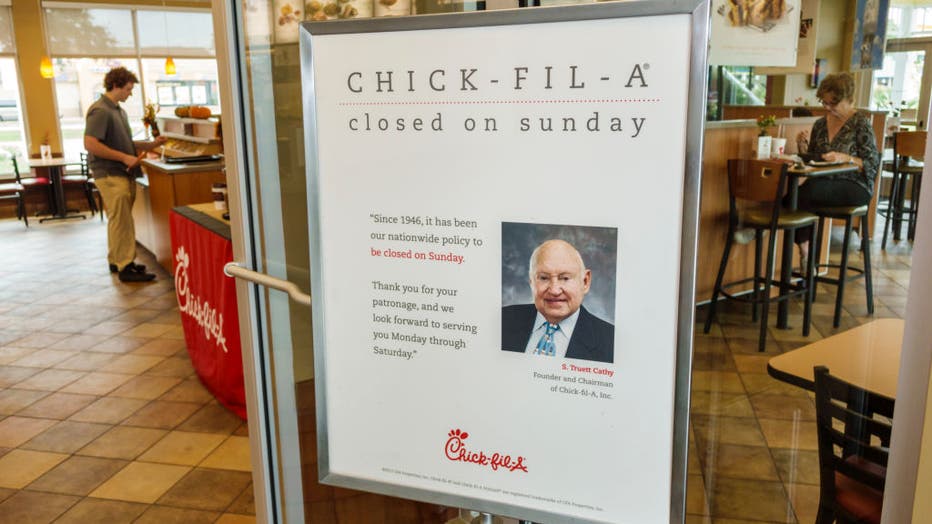 "Closing our business on Sunday, the Lord's Day, is our way of honoring God and showing our loyalty to Him," Truett Cathy wrote in his 2022 book "Eat Mor Chikin: Inspire More People," according to Business Insider.

Truett Cathy continued: "My brother Ben and I closed our first restaurant on the first Sunday after we opened in 1946, and my children have committed to closing our restaurants on Sundays long after I'm gone. I believe God honors our decision and sets before us unexpected opportunities to do greater work for Him because of our loyalty."

Some experts have estimated that the chain likely loses millions of dollars by refusing to open on Sundays. But the strategy may also pay off in other ways, including being a benefit to employees and persuading customers to come back with more urgency.

The Christian roots of Chick-fil-A and Truett Cathy, who died in 2014, have also led to some controversies — most notably, the company’s gay rights record.

In 2012, then-CEO Dan Cathy, Truett Cathy’s son, faced backlash for his comments in multiple interviews that he was "supportive of the family — the biblical definition of the family unit." It also was widely reported that Chick-fil-A’s charitable arm had donated millions to anti-LGBTQ groups. 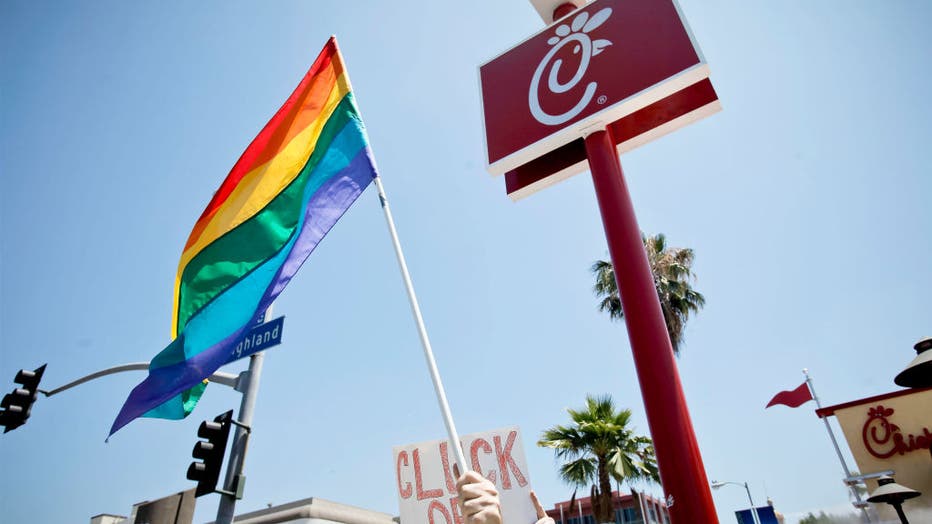 FILE - The Chick-fil-A at the PETA and LGBT community protest at Chick-fil-A on Aug. 1, 2012, in Hollywood, California. (Photo by Tibrina Hobson/FilmMagic)

Following a backlash, Chick-fil-A said it would stop making donations to some groups. But tax filings obtained by the progressive news site ThinkProgress revealed that the company had donated $1.8 million to groups widely criticized by LGBTQ advocates in 2017, alone.

By 2019, airports in Buffalo, New York, and San Antonio, Texas, blocked the restaurant from opening at their sites because of the company’s gay rights record. Some college campuses banned the chain. A location in the United Kingdom closed because of protests.

Later that year, the company announced that it was ending donations to three groups that oppose gay marriage in an effort to halt protests and broaden its customer base, including the Salvation Army and the Fellowship of Christian Athletes.

"This decision was made to create more clarity — and to better address three critical needs facing children across the communities Chick-fil-A serves," the company said in a November 2019 statement.