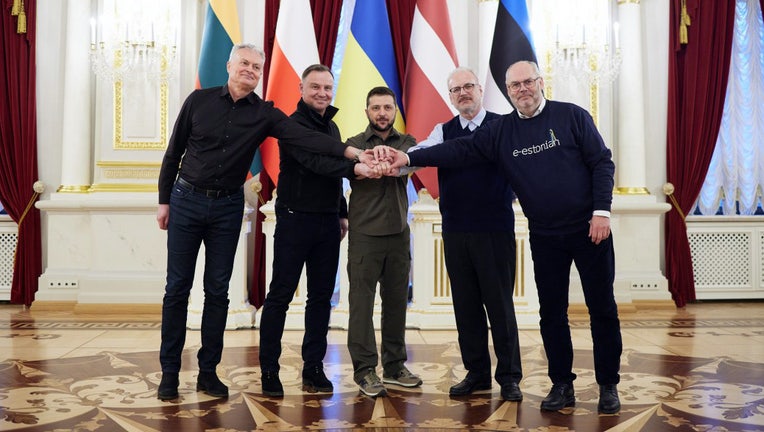 KYIV, Ukraine - The presidents of four countries on Russia’s doorstep visited Ukraine on Wednesday and underscored their support for the embattled country, where they saw heavily damaged buildings and demanded accountability for what they called war crimes carried out by Russian forces.

The visit by the presidents of Poland, Lithuania, Latvia and Estonia was a strong show of solidarity by the leaders of the countries on NATO’s eastern flank, three of them like Ukraine once part of the Soviet Union. The three traveled by train to the Ukrainian capital, Kyiv, to meet with their Ukrainian counterpart, Volodymyr Zelenskyy, and visited Borodyanka, one of the towns near Kyiv where evidence of atrocities was found after Russian troops withdrew to focus on the country's east.

"The fight for Europe’s future is happening here," Lithuanian President Gitanas Nauseda said, calling for tougher sanctions, including against Russia’s oil and gas shipments and all the country’s banks.

Elsewhere, in one of the most crucial battles of the war, Russia said more than 1,000 Ukrainian troops had surrendered in the besieged southern port of Mariupol, where Ukrainian forces have been holding out in pockets of the city. A Ukrainian official denied the claim, which could not be verified.

RELATED: Nearly half of Ukraine's territory needs to be cleared of mines, state news agency reports

Russia invaded on Feb. 24 with the goal, according to Western officials, of taking Kyiv, toppling the government and installing a Moscow-friendly one. But the ground advance slowly stalled and Russia lost potentially thousands of fighters in seven weeks of war. The conflict has killed untold numbers of Ukrainian civilians and forced millions more to flee. The fighting has also rattled the world economy, threatened global food supplies and shattered Europe's post-Cold War balance.

A day after he called Russia's actions in Ukraine "a genocide," Biden approved $800 million in new military assistance to Ukraine, saying weapons from the west have sustained Ukraine's fight so far and "we cannot rest now." The weapons include artillery systems, armored personnel carriers and helicopters. 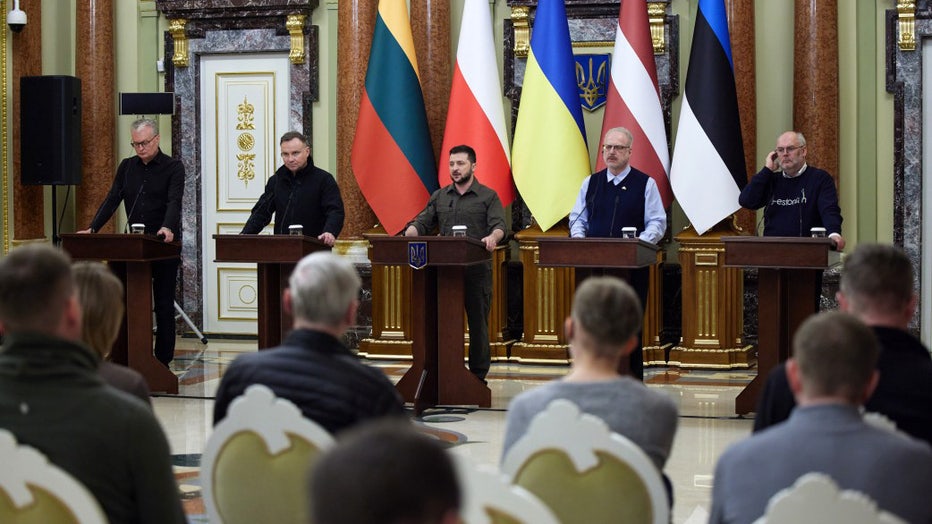 An expert report commissioned by the Organization for Security and Cooperation in Europe found "clear patterns of (international humanitarian law) violations by the Russian forces in their conduct of hostilities." The report was written by experts selected by Ukraine and published Wednesday by the Vienna-based organization that promotes security and human rights. 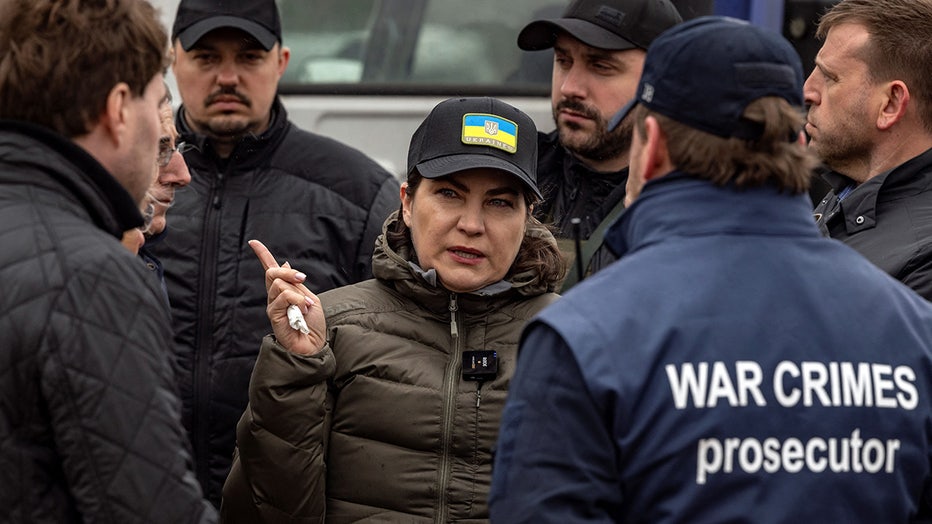 Ukraine's Prosecutor General Iryna Venediktova visits a mass grave in Bucha, on the outskirts of Kyiv, on April 13, 2022, amid Russia's military invasion launched on Ukraine. (Photo by FADEL SENNA/AFP via Getty Images)

The report said there were also violations by Ukraine, but concluded those committed by Russia "are by far larger in scale and nature."

Ukraine has previously acknowledged that there could be "isolated incidents" of violations and has said it would investigate.

Russian President Vladimir Putin has denied his troops committed atrocities, and on Tuesday insisted Russia "had no other choice" but to invade. He said the offensive aimed to protect people in parts of eastern Ukraine and to "ensure Russia’s own security." He vowed it would "continue until its full completion and the fulfillment of the tasks that have been set."

He insisted Russia’s campaign was going as planned despite a major withdrawal after its forces failed to take the capital and suffered significant losses.

Following those setbacks, Russian troops are now gearing up for a major offensive in the eastern Donbas region, where Moscow-allied separatists and Ukrainian forces have been fighting since 2014, and where Russia has recognized the separatists’ claims of independence. Military strategists say Moscow believes local support, logistics and the terrain in the region favor its larger, better-armed military, potentially allowing Russia to finally turn the tide in its favor.

A key piece of the Russian campaign is Mariupol, which lies in the Donbas and which the Russians have pummeled since nearly the start of the war. Ukrainian presidential adviser Mykhailo Podoliak tweeted that the city’s defenders were short of supplies but were "fighting under the bombs for each meter of the city."

Russian Defense Ministry spokesman Maj.-Gen. Igor Konashenkov said 1,026 troops from the Ukrainian 36th Marine Brigade had surrendered at a metals factory in the city. But Vadym Denysenko, adviser to Ukraine’s interior minister, rejected the claim, telling Current Time TV that "the battle over the seaport is still ongoing today."

It was unclear when the surrender may have occurred or how many forces were still defending Mariupol.

According to the BBC, Aiden Aslin, a British man fighting in the Ukrainian military in Mariupol, called his mother and a friend to say he and his comrades were out of food, ammunition and other supplies and would surrender.

RELATED: Russia has yet to slow Western countries' pouring of weapons into Ukraine

Russian state television on Wednesday broadcast footage that it said was from the port city showing dozens of men in camouflage outfits walking with their hands up and carrying others on stretchers or in chair holds. One man held a white flag on a staff in one hand and the handle of a stretcher in another. In the background was a tall industrial building with its windows shattered and its roof missing, identified by the broadcaster as the Iliich metalworks.

Another Zelenskyy adviser, Oleksiy Arestovych, did not comment on the surrender claim, but said in a post on Twitter that elements of the same brigade managed to link up with other Ukrainian forces in the city as a result of a "risky maneuver."

Ukrainian Deputy Defense Minister Hanna Maliar said the country is investigating a claim that a drone dropped a poisonous substance on the city. She said it was possible phosphorus munitions had been used in Mariupol. 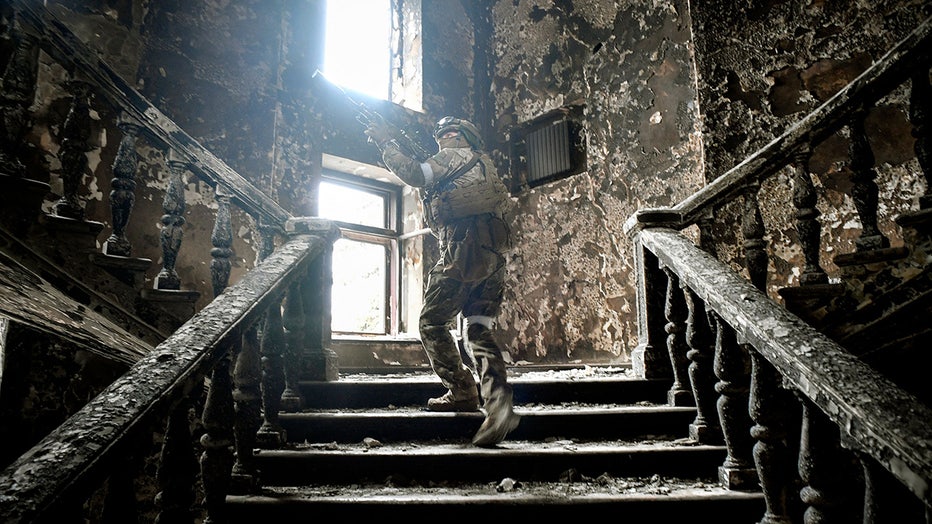 A Russian soldier climbs stairs at the Mariupol drama theatre, hit on March 16 by an airstrike, on April 12, 2022 in Mariupol. EDITOR'S NOTE: This picture was taken during a trip organized by the Russian military. (Photo by ALEXANDER NEMENOV/AFP via

Biden said it would be up to lawyers to decide if Russia's conduct met the international standard for genocide.

French President Emmanuel Macron declined to use the word but said "it has been established that war crimes have been committed by the Russian army."

An International Criminal Court investigation into war crimes is underway in Ukraine, including into atrocities revealed after Moscow’s retreat from the Kyiv area, where Ukrainian authorities say more than 720 people were killed, with 403 bodies found in the town of Bucha alone.

ICC prosecutor Karim Khan, who visited Bucha, said in a tweet Wednesday that Ukraine "is a crime scene" and the court must "pierce the fog of war" to determine what has occurred.

Meanwhile at the United Nations, Secretary-General Antonio Guterres said there is no chance at the moment for a humanitarian cease-fire in Ukraine, as the U.N. was seeking.

Residents in Yahidne, a village near the northern city of Chernihiv, said Russian troops forced them to stay for almost a month in the basement of a school, allowing them outside only to go to the toilet, cook on open fires — and bury those who died in a mass grave.

In one of the rooms, the residents wrote the names of those who perished during the ordeal. The list counted 18 people.

"An old man died near me and then his wife died next," said resident Valentyna Saroyan. "Then a man died who was lying there, then a woman sitting next to me. ... She died as well. Another old man looked so healthy, he was doing exercises, but then he was sitting and fell. That was it."