NEW YORK - Inside a 300,000-square-foot greenhouse in Riverhead, Long Island, a farming revolution is flourishing. It's not what's being grown, but how it's being grown, and when. When most traditional farmers on the East Coast wrap up their growing seasons in late fall, Carl Gabrielsen is just getting started.

"There's a tremendous market out here, we have, how many? 15 million people within a 40-, 50-mile radius and we can't feed them, we can't feed ourselves anymore," Gabrielsen said of the winter season.

But that's changing, he says. Gabrielsen's family has grown flowers since the 1950s, but they used to take the winter off. Then a few years ago Gabrielsen discovered a method that would enable him to produce viable crops in the offseason, regardless of the weather: hydroponic farming.

Hydroponic farming is the practice of growing plants indoors and without soil. It originated more than 60 years ago recently became more popular for growing food.

"Hydroponic farming has been on the upswing in general, particularly because of severe weather patterns," said Dickson Despommier, an emeritus professor of public health at Columbia University and the author of "The Vertical Farm: Feeding the World in the 21st Century."

Growing hydroponically allows farmers to cheat the seasons, but it's also brought fresh produce to places where there's no room to grow the traditional way. Despommier helped create the concept of vertical farming, which is just what it sounds like, growing food from the bottom up.

It's happening around the world in cities like Newark where AeroFarms is opening one of the world's largest vertical farms in the coming months.

"That's not going to be the only one, in another five years from now you're going to see lots of those springing up all over the place," Despommier said. "There is nothing you can't grow hydroponically."

Out in Riverhead Gabrielsen Farms is producing up to 6000 heads of lettuce a week, as well as greens like bok choy and herbs like parsley and basil.

As with any kind of farming, it starts with a seed but the only planting happens in small trays. Special LED lights simulate the sun's glow and warmth.

Once the plants begin to grow they are moved to troughs where flowing water wets the roots every four to five hours, according to Gabrielsen.

Contrary to what you might think, he says the process actually saves water.

"Let's take a head of lettuce we grow outside in the field. You would need about 50 gallons of water to produce that head of lettuce," he said. "Here, with hydroponics, we use between one and two gallons per head of lettuce."

The water is recycled in three big tanks and Gabrielsen says there's no waste.

There are also no pesticides. Gabrielsen uses insects to control the population of damaging aphids.

"Years ago if you saw, let's say, an aphid, you would get out the pesticides and just blast away, ya know? Now we release parasitic wasps, they'll hatch and just seek out the aphids."

As Gabrielsen's lettuce winds up in supermarkets and at restaurants on Long Island, and vertical farming begins to serve more produce-starved urban communities, hydroponic farming is feeding the global demand for healthy locally grown food, year-round. 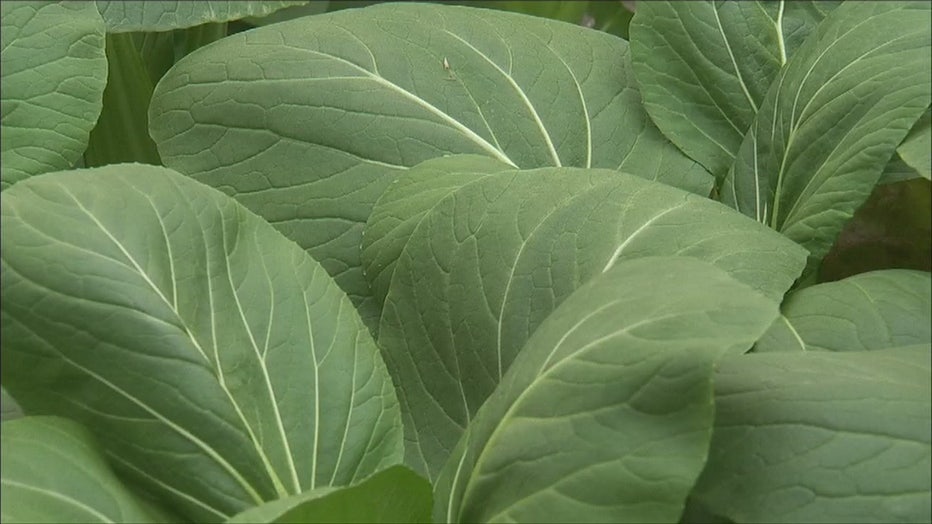