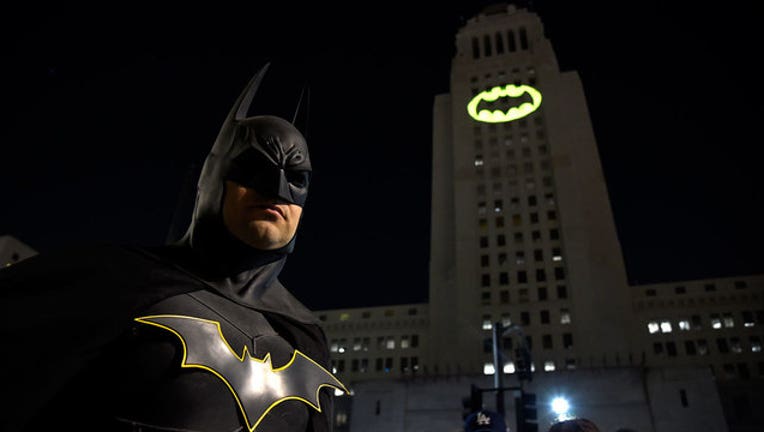 Tony Bradshaw, of Los Angeles, dressed as Batman, poses in front of a Bat-Signal projected onto City Hall during a tribute to "Batman" star Adam West on Thursday, June 15, 2017, in Los Angeles. (Photo by Chris Pizzello/Invision/AP)

NEW YORK (FOX 5 NY) - September 21 is Batman Day, and as part of the celebration of the Caped Crusader’s 80th Anniversary, DC and Warner Bros. are bringing the bat-signal to New York City and twelve other cities all across the world.

The bat-signal will be able to be found projected on the west side face Domino Sugar Refinery at 300 Kent Avenue in Brooklyn beginning at 8 p.m., and the Empire State Building will also shine in yellow and white to honor The Dark Knight.

The global celebration will also take place in:

Fans can follow the festivities with the new interactive Batman Bat-Tracker. As cities flip the switch illuminating the famous insignia, the Batman Bat-Tracker will mirror the real-time projections. Additional information on Bat-Signal celebrations and Batman Day activations can be found at Batman80.com.