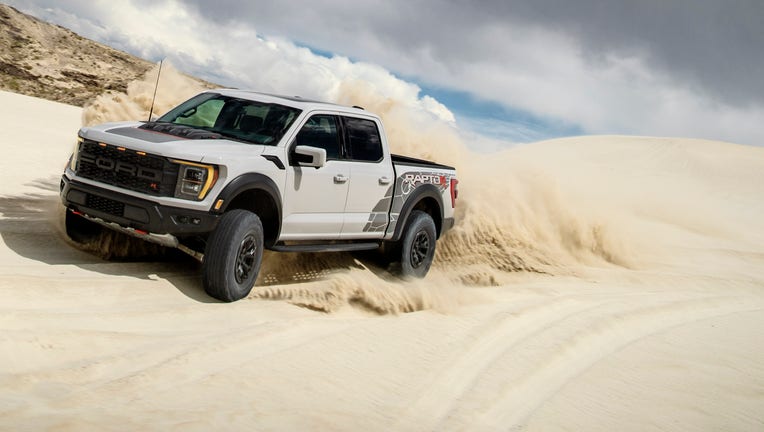 Preproduction model with optional equipment shown. Available late 2022. Professional driver on a closed course. Always consult the Raptor supplement to the Owner’s Manual before off-road driving, know your terrain and trail difficulty, and use approp

The 2023 F-150 Raptor R is a higher performance version of the desert racing-inspired pickup that has been a hit for the brand for over a decade.

The top of the line sport truck comes with a 700 hp supercharged V8 that makes it the most powerful F-150 Ford has ever built, boasting 250 hp more than the F-150 Raptor's turbocharged V6.

The 5.2-liter engine is a version of the engine featured in the Mustang Shelby GT500, but updated for off-road truck duty.

Ford claims it is a "scary fast" pickup.

Are EV batteries as green as they say? Yes and no

Eric Wachsman, professor at the University of Maryland and director of Maryland Energy Innovation Institute, weighs in on some of the reasons why some people are not totally behind electric vehicles.

Ford Performance Chief Engineer Carl Widmann told Fox News Autos the F-150 Raptor R also gets a beefed up driveline with a stronger front axle and aluminum driveshaft matched to the extra power and torque, the latter of which is rated at 640 lb-ft. Its maximum towing capacity is listed at 8,700 pounds, 500 pounds more than the F-150 Raptor.

The F-150 Raptor's signature long-travel suspension carries over mostly intact, with just a few tweaks to accommodate a weight gain of only around 100 pounds, which is practically a rounding error on a truck that weighs nearly three tons. Computer-controlled dampers constantly manage their stiffness to soak up bumps and jumps while keeping the body under control. 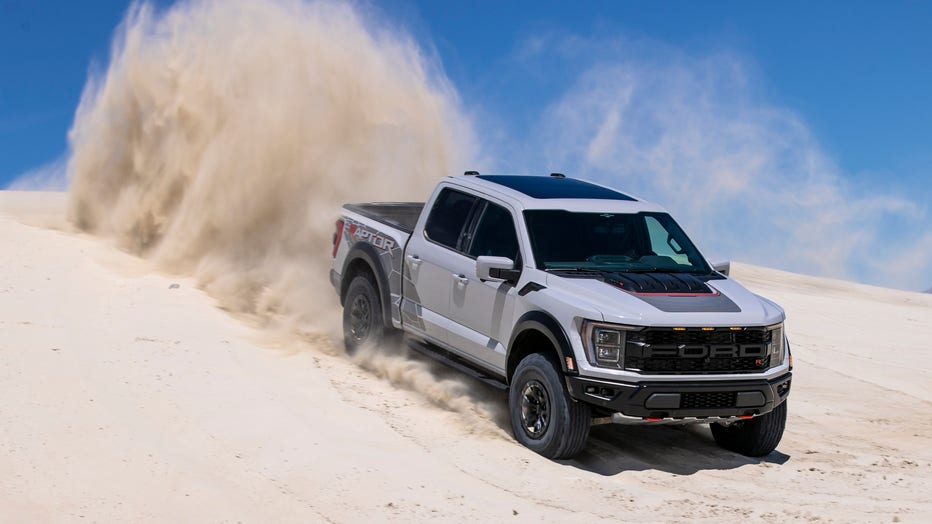 Preproduction model with optional equipment shown. Available late 2022. Professional driver on a closed course. Always consult the Raptor supplement to the Owner’s Manual before off-road driving, know your terrain and trail difficulty, and use approp

A set of 37-inch all-terrain tires are standard and help provide 13.1 inches of ground clearance. That is 1.1 inches more than the standard F-150 Raptor and the same as the Bronco Raptor that rides on the same size rubber.

REVIEW: THE 2022 FORD BRONCO RAPTOR IS THE ‘ULTRA’ SUV

The F-150 Raptor R's will match up against the 702 hp Ram 1500 TRX for factory monster truck bragging rights, and Widmann is not concerned about those two extra horsepower.

"It's not really a big deal," Widmann said. "We like round numbers."

Widmann said the goal was to build a better all-around pickup and is confident his team delivered a "phenomenal off-roading truck" with all the qualities of the current F-150 Raptor enhanced by a lot more punch.

If that is not too frightening for you, the reservations book opens today.