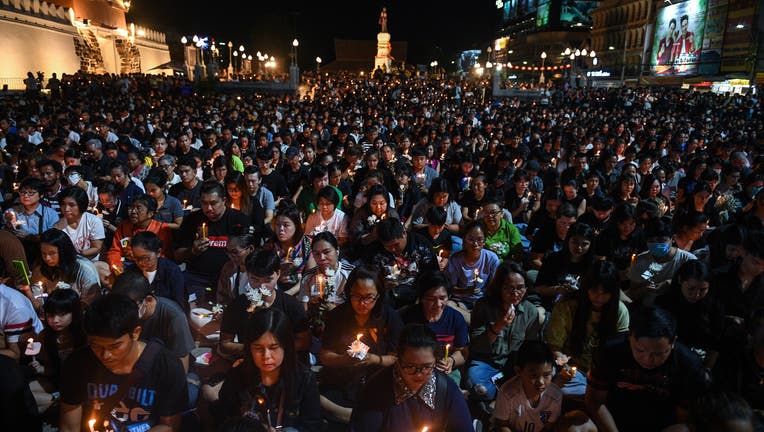 TOPSHOT - People gather for a candle light vigil following a deadly mass shooting in Nakhon Ratchasima on February 9, 2020. - A Thai soldier who killed at least 26 people before being shot dead in a mall by commandos went on the rampage because of a

NAKHON RATCHASIMA, Thailand - As mourning began for the victims of Thailand’s worst mass shooting, the country counted its losses: a mother shot dead at the wheel of her car as her son sat beside her, a 13-year-old student gunned down as he was riding his motorbike home and more than two dozen other people.

Authorities said the attack was carried out by a single gunman — a disgruntled soldier who opened fire on strangers before he was fatally shot Sunday at a shopping mall. Another 58 people were wounded.

The dead were mourned Sunday night in Nakhon Ratchasima, a hub for Thailand’s relatively poor and rural northeastern region. More than 1,000 people turned up for the vigil led by Buddhist monks. They lit candles and prayed and chanted in the town square featuring a statue of Thao Suranari, a governor’s wife who is revered for leading troops against invaders from Laos two centuries ago.

Officials said the gunman was angry over a financial dispute with his commanding officer. He made Col. Anantarote Krasae his first victim before stealing guns from an army camp and heading to the mall, shooting wildly along the way at people inside and outside the building.

The attacker was identified as Sgt. Maj. Jakrapanth Thomma, who holed himself up in the Terminal 21 Korat, an airport-themed mall filled with colorful Lego sculptures, a merry-go-round and huge replicas of landmarks from around the world.

After most mall employees and shoppers were evacuated, a joint police and military team hunted down the gunman and killed him.

“This incident was unprecedented in Thailand,” Prime Minister Prayuth Chan-ocha told reporters as he gave a casualty count after visiting the victims in hospitals. By the end of the day, the toll had risen to 29 people killed.

The death toll surpassed Thailand’s last major attack on civilians, a 2015 bombing at Bangkok’s Erawan Shrine that was allegedly carried out by human traffickers who killed 20.

“I hope this is the only one and the last incident and that it never happens again. No one wants this to happen. It could be because of this person’s mental health in this particular moment,” Prayuth said.

He said he was worried that people inside the mall could be accidentally hit by bullets fired by police, but added, “I have checked, that didn’t happen.”

Survivors and victims’ families gathered during the day at the city’s hospitals, where they recounted their ordeals.

“I received an order from my superior to block off the road so that no one could go in the direction” of the gunman, the corporal recalled. “So I was signaling to oncoming traffic, when I turned around and saw him. If I had not, I would not have survived. I tried to run and find somewhere to hide. But I could only take two steps and then I heard the sound — ‘bang.’ My leg just went and I couldn’t walk. A good Samaritan helped carry me away.”

High school student Nachote Chotiklang said he was in his mother’s car as she passed the gunman’s vehicle.

The assailant “got out of the car and fired into the window. At that, I ducked down and didn’t do anything until I felt that car hit something. It hit a tree.”

“What happened to your mom?” Suwat asked.

Nachote shook his head while another man explained that she had died.

The middle school student was riding his motorbike home when the gunman fired on him from his car on his way to the mall. Rachanon, the family’s only child, was one of the first victims.

The father spoke at the first day of his son’s Buddhist funeral.

“I don’t want to lose him like this,” Nuttawut said. “This is too sudden. We had plans for him, growing up. That’s all. We didn’t impose any expectations on him.”

Nuttawut paused for a long moment.

“I want to continue taking care of him, but I no longer have that opportunity,” he said, breaking into sobs.