A Texas man was captured on video rescuing his dog that fell into a frozen pool.

AUSTIN, Texas (AP) - Anger over Texas' power grid failing in the face of a record winter freeze mounted Tuesday as millions of residents in the energy capital of the U.S. remained shivering with no assurances that their electricity and heat — out for 24 hours or longer in many homes — would return soon or stay on once it finally does. One power company was even warning its customers that they should switch providers to avoid an astronomical bill.

RELATED: ‘Watch your pets’: Man plunges into frozen pool to rescue dog who fell through ice

One megawatt-hour is equal to about 1,000 kilowatt-hours.

As a result, one Texas power supplier, Griddy, urged its customers to switch providers.

"We know these high prices and record freezing temperatures can be alarming, which is why we want to share with you certain market updates to help you decide what is best for you and your family," the company said in a statement posted to its website. "We expect daily electricity charges to be significantly higher through Tuesday. These are projections and the market could either improve or worsen depending on weather conditions."

But many consumers may not be able to get new service in an acceptable timeframe.

"The soonest possible start date for a new enrollment or switch is Saturday, February 20," Cirro Energy, another Texas provider, said on its website. 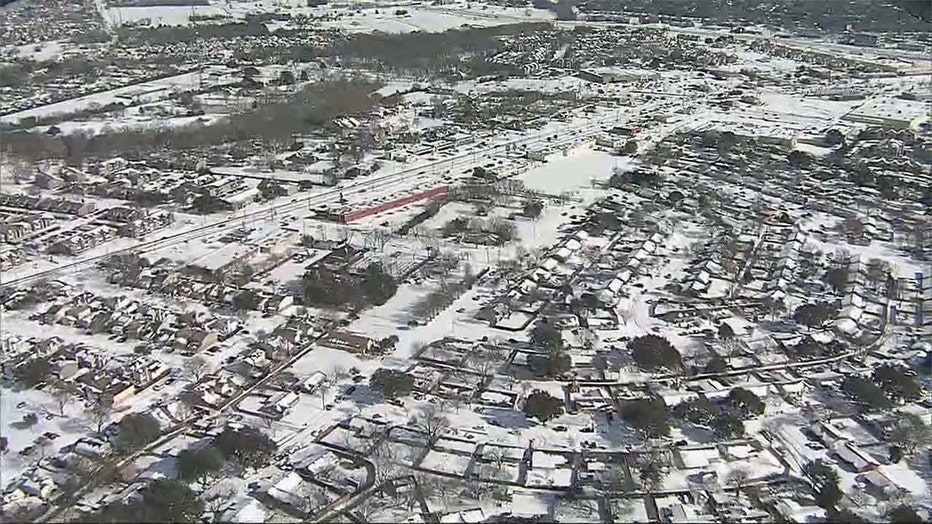 The Electric Reliability Council of Texas (ERCOT), which manages the state’s flow of electric power, was asking customers to reduce electricity use as much as possible through Tuesday, including closing shades to reduce the amount of heat lost through windows and avoiding the use of large appliances.

"We are experiencing record-breaking electric demand due to the extreme cold temperatures that have gripped Texas," said ERCOT President and CEO Bill Magness. "At the same time, we are dealing with higher-than-normal generation outages due to frozen wind turbines and limited natural gas supplies available to generating units."

RELATED: Hundreds of thousands without power for second day across North Texas as blackouts continue

The soaring prices are representative of Texas’ wholesale power markets, which have the potential to be exposed to real-time swings.

In response to the historic price hikes, Texas Gov. Greg Abbott ordered an investigation into ERCOT.

"The Electric Reliability Council of Texas has been anything but reliable over the past 48 hours," Abbott said in a statement posted to his Twitter account.

"Far too many Texans are without power and heat for their homes as our state faces freezing temperatures and severe winter weather. This is unacceptable," Abbott said.

ERCOT officials defended their preparations for a once-in-a-generation winter storm that plunged temperatures into the single digits as far south as San Antonio. But its senior director of system operations, Dan Woodfin, said the severity of the storm went beyond the council's typical plans. Power stations that generate electricity were also knocked offline by the cold.

ERCOT tweeted Tuesday that power plants "continue to struggle with frigid temperatures," but it offered no timetable for when power would be fully restored. The Federal Emergency Management Agency said Texas had requested 60 generators and that hospitals and nursing homes would get priority.

Ed Hirs, an energy fellow at the University of Houston, said the problem was a lack of weatherized power plants and a statewide energy market that doesn't incentivize companies to generate electricity when demand is low. In Texas, demand peaks in August, at the height of the state's sweltering summers.

He rejected that the storm went beyond what ERCOT could have anticipated.

"That's nonsense. It's not acceptable," Hirs said. "Every eight to 10 years we have really bad winters. This is not a surprise."