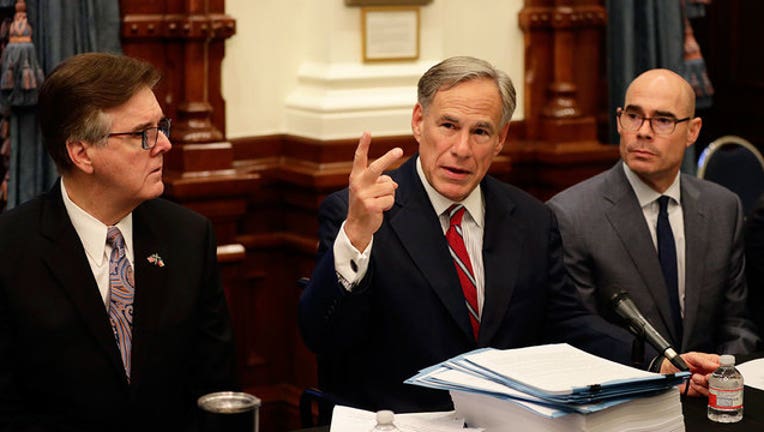 EL PASO, Texas (AP) - Republican Gov. Greg Abbott said Thursday "mistakes were made" when he sent a fundraising mailer that called on supporters to "defend Texas" from illegal immigration, which was dated a day before a gunman targeting Mexicans killed 22 people in El Paso.

The letter was condemned as racist and anti-Latino by the Texas Democratic Party after it surfaced last week. That was followed by Abbott coming under more criticism the next day - this time from El Paso lawmakers - for tweeting that "liberals" on the U.S. Supreme Court had required Texas to pay for schooling for students who are not in the U.S. legally.

The lawmakers called the tweet "dangerous" in the wake of the Aug. 3 mass shooting at a Walmart, which authorities say was carried out by a gunman who posted a racist screed online that railed against an influx of immigrants to the U.S.

Taken together, the mailer and tweet have put a spotlight on Abbott's hardline rhetoric at a time when he has urged unity in the aftermath of another mass shooting in Texas.

He addressed the letter publicly for the first time before leading a meeting in El Paso with lawmakers, gun activists and family members of those killed at the Walmart.

"I did have the opportunity to visit with the El Paso delegation and help them understand that mistakes were made," Abbott said. "And a course correction has been made. And I emphasized the importance of making sure the rhetoric will not be used in any dangerous way. And we will make sure that we will work collaboratively."

"Governor Abbott has an apology to make. The eyes of the world are on us," said Manny Garcia, executive director of the Texas Democratic Party.

Democrats have compared Abbott's language to the divisive words used by President Donald Trump, whose critics say has fostered the kind of anti-immigrant hatred that the El Paso gunman posted online. Since the shooting, Trump has defended his rhetoric on such issues as immigration and denied stoking divisions that spawned the violence, contending that he "brings people together."

Abbott was joined in El Paso on Thursday by his wife, Cecilia Abbott, the first Hispanic first lady in Texas history. When he was elected governor in 2014, Abbott fared better with Hispanic voters than any Republican gubernatorial candidate in Texas since George W. Bush, and last year he soundly defeated a Hispanic former sheriff to win a second term.

But Abbott also signed one of the nation's toughest "sanctuary city" bans in 2017 that was condemned by Latino groups. He has also aggressively pushed for voting restrictions that critics say target the state's booming Hispanic population.

Abbott has said Texas will crackdown on extremist groups after the El Paso shooting. Federal prosecutors have also said they're weighing hate crime charges against the suspected gunman, Patrick Crusius.

"If you look at his manifesto, you will see time and again, his target was Texas, the Texas culture, Hispanic community and blended communities," Abbott said.