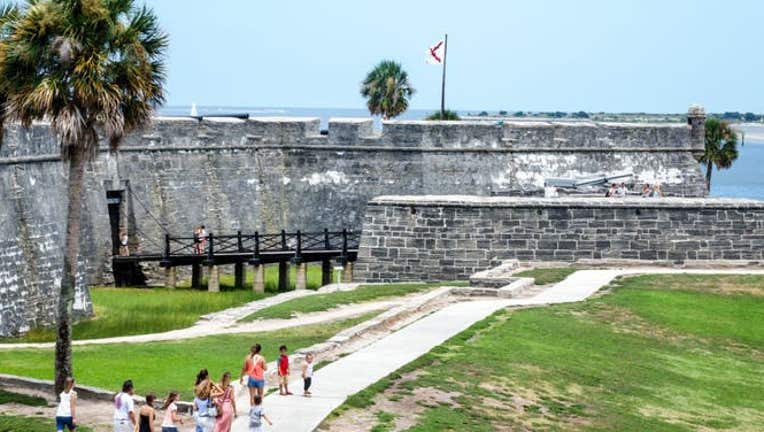 ST. AUGUSTINE, Fla. - The cast-iron cannons that once protected the nation’s oldest city from invasion now have a new claim on life, thanks to researchers at Texas A&M University.

The school has completed restoring 22 of the 25 cannons that spent centuries weathering through the harsh Florida climate at the Castillo de San Marcos and Fort Matanzas in northern Florida.

"The clash of iron and salt kicks off a pretty rapid deterioration process. And just the cannons sitting in Florida’s salty air pick up some of those the chloride ions and then start to degrade," Chris Dostal, the director of the Conservation Research Laboratory at Texas A&M University, said.

The intensive restoration project started in 2018 when the cannons were hoisted for their perches by a crane and driven some 1,000 miles to College Station, Texas.

Once at the Conservation Research Laboratory at Texas A&M University, researchers used a process called electrolytic reduction to reduce the impurities in the metal.

"We stripped the cannons of whatever paint that they had on them, and then we submerged them into a vat with an electrolyte of sodium hydroxide. And then we used a negative electric current to drive any corrosion out of the cannon," Dostal said.

After the treatment, the cannons were coated with several layers of acid and sealant to extend the life of the artifacts that date back from the 17th and 19th centuries.

Before being trucked back to Florida, the cannons were painted red before the final coatings of black paint were layered on as the topcoats.

The cannons from the Castillo de San Marcos and Fort Matanzas date back to between the 17th and 19th centuries. (Conservation Research Laboratory at Texas A&M)

Dostal said when the black paint wears away, and the red coating is exposed, it’ll serve as a reminder to National Park Service staff that it is time to perform maintenance on the cannons.

The university expects to finish the work on all three remaining cannons by the end of January.

5 DAYS OF FREE ADMISSION TO NATIONAL PARKS IN 2022

The cost of restoring artifacts that date back to the colonization of Florida by the Spanish and British was estimated by the National Park Service to cost more than $450,000.

Fortunately for taxpayers, the funding will come out of admission tickets from the fort.

Dostal believes that with the combination of the treatment and an enhanced maintenance program, the cannons will be able to withstand the Florida climate for tourists to learn about the history of St. Augustine for decades to come.

LINK: Get updates on this story from FOXweather.com.