"I'm excited to announce that we're moving our headquarters to Austin, Texas," Musk said in the meeting, which was livestreamed.

AUSTIN, Texas - It's official. Tesla is moving its headquarters to Austin.

Elon Musk announced the move during the 2021 Annual Shareholders meeting Thursday afternoon at the new Gigafactory in Del Valle. "I'm excited to announce that we're moving our headquarters to Austin, Texas," Musk said in the meeting, which was livestreamed.

The Fremont factory will stay up and running. Musk, acknowledged an affordability and accessibility issue for some Tesla's employees in California, acknowledging why he chose to put the Austin gigafactory in the location that it is in.

"It’s tough for people to afford houses and people have to come from far away," he said about the Fremont factory.

In their incentive agreements they agreed to pay $15 for every job that is created and that includes construction.

Laura Huffman with the Austin Chamber of Commerce believes the move to Austin just solidifies the city's image. "It just cements our reputation globally as a city where innovation is a hub. Tesla has proven to be such an important company in Austin, partly because it is offering 10,000 jobs here," said Huffman.

Between his time at Space X in South Texas or staying with a friend here in Austin, Musk felt the winter storm like the rest of us.

"I was actually in Austin during that snowstorm, no electric, no water, no heating, couldn’t even get to a food store. If you had the Solar Plus Powerwall, you would’ve had lights, electricity and internet too," he said about Tesla’s backup energy product.

Musk says the new factory will be making cars as soon as it opens, but it won't be in full scale production until late next year.

In the final slide of the presentation, Musk also unveiled a new logo for Tesla, an oval reminiscent of rodeo belt buckles featuring the Tesla "T" on a star with the words "Don't Mess With," implying a play on the well-known "Don't Mess with Texas." 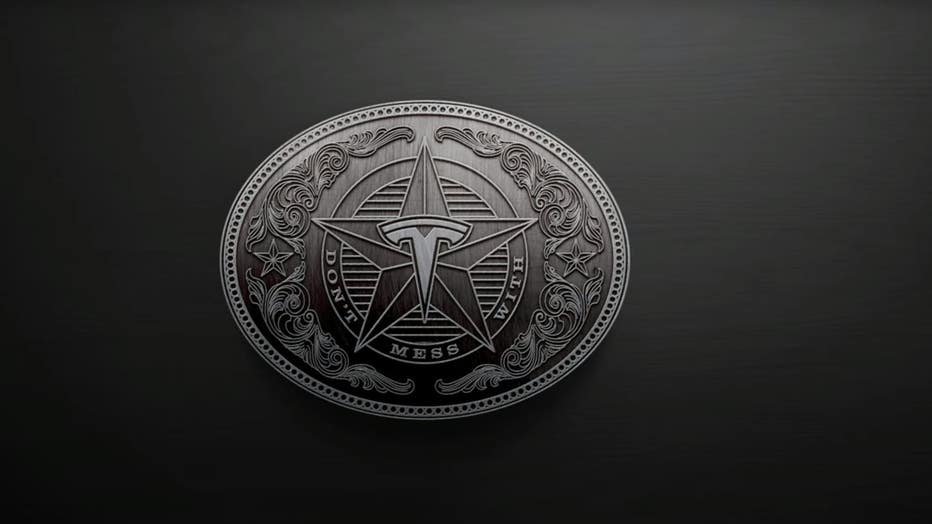 "We welcome Tesla home! It's a tech company that creates the clean manufacturing, middle-skill jobs Austin needs. We’re one of the safest big cities, with a strong innovative, entrepreneurial, environmentally focused culture and Tesla fits right in. Tesla is now an even larger part of a community that works together to meet our challenges and to enjoy a magical city. "

This latest move follows Musk's own move from California to Austin in December 2020 and his previous threats to move the company’s operations out of California in May 2020, due to COVID-19 shelter-in-place rules that forced its Fremont plant to shut down.

This announcement comes as the company plans to open one of its newest factories in Austin. "Our factory is five minutes from the airport, 15 min from downtown and we are going to create ecological paradise," said Musk.

Del Valle was picked in July 2020 as the site for Tesla's largest auto assembly plant. This Gigafactory will build Tesla's upcoming Cybertruck pickup and is a second U.S. factory for the Model Y small SUV.

Tesla is not the only California tech company moving its headquarters to Austin. Oracle Corporation, a multi-billion dollar software and technology company, announced in December 2020 it was leaving Silicon Valley for Austin.