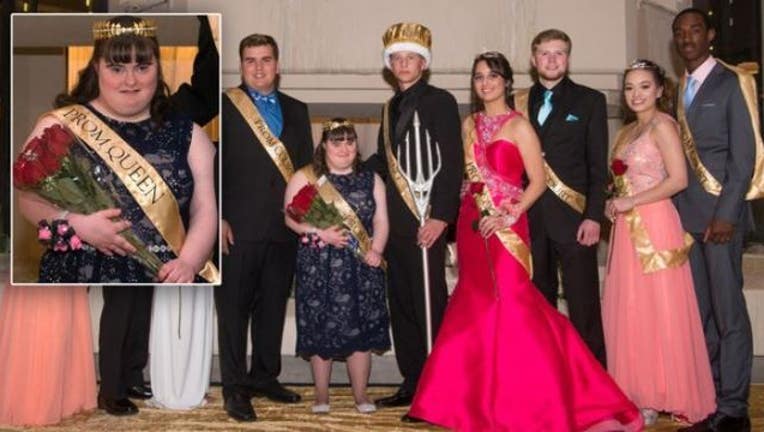 INSIDE EDITION - Many girls dream of becoming prom queen, but it became a reality for this South Dakota teen with Down syndrome after all her friends nominated her for the coveted title.

Katie Haugh, a senior at Douglas High School, was voted prom queen earlier this month after an overwhelming student-run campaign to get her to the top.

“I never expected it at all," said her mom, Donna Haugh, who is a special education teacher's aide at the same school. “It was so exciting. It was unbelievable. It was good for her [and] good for us.”

Her mom told InsideEdition.com that Katie was first nominated to become queen, alongside four other girls, “which I was surprised about.”

Then, students rallied around her campaign to become queen, handing out ballots and yelling “Vote for Katie!” as people placed their votes.

Although Katie said she was only there for the dancing and her friends, she was excited to get on stage in her navy lace gown, and accept the golden crown when she was declared this year’s prom queen.

“Of course, I started to cry,” her mom said. “At first, I was just happy and then the tears started coming.”

She explained it hasn’t always been easy being the mom of a daughter with Down syndrome.

Katie spent the past six months of her senior year sick, and spent her days in and out of the hospital instead of at school with her friends.

But, the moment she got back, Haugh said she was touched by the efforts of her fellow students to make her feel welcome all over again.