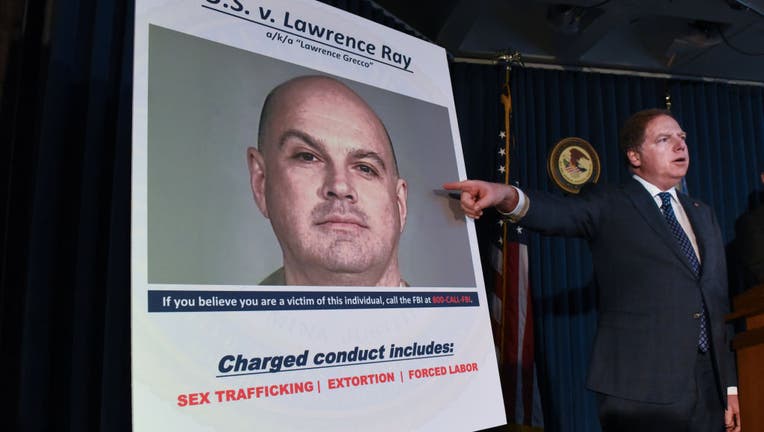 NEW YORK (AP) - Prosecutors have turned over tens of thousands of video and audio files to lawyers for an ex-convict charged with weaponizing electronics as a coercive tool as he forced vulnerable college students into prostitution or unpaid labor.

Lawrence Ray, 60, is accused of moving into his daughter’s residence at Sarah Lawrence College in 2010, befriending her classmates and then becoming a patriarchal figure who exerted a manipulative influence over their lives for a decade while cheating them out of nearly $1 million. He was arrested in February.

In court papers late Wednesday, Ray's lawyers bemoaned that their incarcerated client can't view most evidence against him because of its sensitive nature. That evidence includes tens of thousands of video files and more than 150,000 audio files among over 15 terabytes of electronic evidence.

They also disputed claims prosecutors put in a Manhattan federal court letter Friday that Ray is using his father to communicate from jail with two women he's accused of abusing.

Prosecutors said Ray’s videos include graphic sexual content of the two women, including “sexual acts performed at Ray's direction that appear designed to debase and control them.” They said Ray's jailhouse calls with his father prove he's still trying to control the women.

“These messages are plainly designed to tamper with witnesses and deter these women from cooperating in the Government’s investigation," prosecutors wrote.

Ray's lawyers want a judge to relax his federal jail conditions or release him on bail to prepare to face charges that carry a potential life prison sentence.

He convinced them they were indebted to him, subjecting them for hours to “grueling interrogations” and deprived them of food and sleep, he said. At least one woman was forced into prostitution and Ray collected over $500,000 from her, prosecutors said.

Ray was previously known for helping send ex-New York City police commissioner Bernard Kerik, a onetime close confidant of former New York City Mayor Rudy Giuliani, to prison. At the time, Ray, who had been the best man at Kerik’s wedding, was under indictment in a $40 million stock scam.

Defense lawyers say some materials prosecutors have turned over include “exculpatory audio and video of alleged victims confessing to harming Mr. Ray."

A lot of the electronic evidence was seized from Ray's Piscataway, New Jersey, residence after his arrest.

Prosecutors described his techniques, in court filings, saying he first earned the trust of victims, getting them to divulge private details that made them highly vulnerable, such as information about their mental health, their family discord, their sexual confusion and their deepest insecurities.

Ray then exploited the information to demean and humiliate victims through interrogations, where victims “confessed” their supposed wrongdoings as he seized their journals and personal devices, prosecutors wrote.

“He recorded their humiliations, including through audio and video recordings" in which Ray verbally and physically abused them, prosecutors said.

One victim he subjected to sex trafficking still has trouble finding employment because Ray created a website with defamatory and humiliating material designed to intimidate the victim and coerce further prostitution, prosecutors said.

Prosecutors said Ray told pretrial services employees after his arrest that one woman was his common-law wife and the other was like a daughter he had “assumed guardianship over.”

Yet, prosecutors said, Ray has now told his father to tell the “supposed daughter” that he would “marry” her and to “make sure she knows that.”