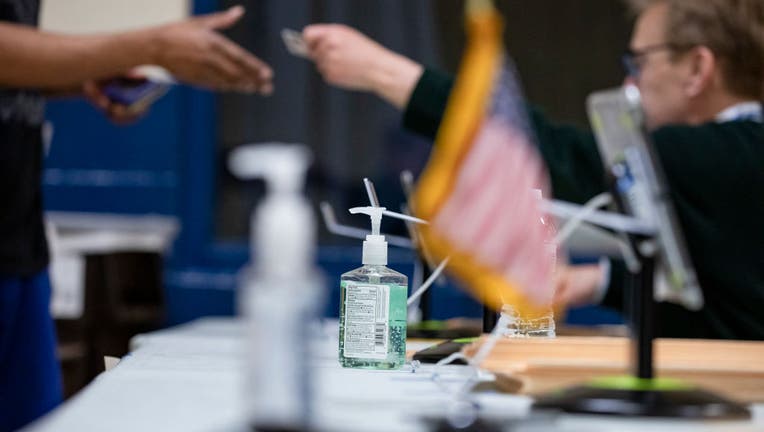 Bottles of hand sanitizer sit at each station where election officials check voter identification at a polling place in Armstrong Elementary School for the Democratic presidential primary election on Super Tuesday, March 3, 2020 in Herndon, Virginia. (Photo by Samuel Corum/Getty Images)

LOS ANGELES - As voting got underway in 14 states Tuesday, two states reported a shortage of poll workers, citing mounting fears about the novel coronavirus outbreak that has made its way to the U.S. from China.

RESULTS: Get a live look at the Super Tuesday election results as they roll in

Officials in Texas and California reported last-minute no-show workers at the polls as the number of cases of COVID-19 increased in the U.S. and the death toll climbed to nine in state of Washington from the virus.

Voting got off to a slow start in Travis County, Texas, because many election workers did not show up, with some citing fears of contracting the coronavirus, according to the county clerk's office. The election office said it began implementing emergency procedures, with elections staff and other employees filling in as poll workers.

Earlier in the week, Texas Gov. Greg Abbott slammed the Centers for Disease Control and Prevention over the release of a patient into the community who had tested positive for coronavirus but seemingly had recovered before displaying symptoms and testing positve a second time.

The woman, who was among the first evacuees brought to Joint Base San Antonio - Lackland, was released after passing two screening tests. But after she left, the results of a third test came back positive.

"What happened in San Antonio and what the CDC did is completely unacceptable,” said Abbott. "It appears to be a case of negligence with regard to allowing this person, who had the coronavirus to leave the TCID, the Texas Center for Infectious Disease, and go back into the general population,” said Abbott.

Texas health officials located the woman at a Holiday Inn near San Antonio's airport. It was determined she had also been to an area shopping mall Saturday, staying there for at least two hours. It was not known exactly how many people at the mall she came into contact with.

Meanwhile, in California, fears over the novel coronavirus were widespread as health officials grappled with an apparent cluster of cases in the northern part of the state, centered around Santa Clara County.

Another county in California addressed concerns over the coronavirus by sending bottles of hand sanitizer to polling places and asking poll workers to post fliers from the public health department on how to avoid spreading the virus.

Jesse Salinas, the chief elections official in Yolo County, just west of Sacramento, said about 10% of poll workers backed out at the last minute, and he pointed to concerns about getting the virus. He said that’s about double what is normal for an election, and sent his team scrambling for replacements.

“We are hoping people remain calm and still participate in the election process,” Salinas said.

The Santa Clara County Public Health Department on Tuesday reported that there were two new cases of coronavirus, bringing the countywide total to 11 confirmed cases.

At polling locations in other states, bottles of hand sanitizer and face masks were a common sight as voters lined up to cast their ballots. In Herndon, Virginia, hand sanitizer met voters at the door where election officials were checking identification.

The Associated Press, Getty, KTVU and FOX 7 Austin contributed to this report.