The balance of Super Tuesday's battlefield raised questions about whether the Democratic primary contest would stretch all the way to the July convention or be decided much sooner.

Joe Biden's late momentum was real in Virginia, a state likely to be a top battleground in November. Close to half of voters there said they made a late decision about whom to vote for in the primary, and about two-thirds of them went for the former vice president, who won the state.

Biden's coalition there looks like it has elsewhere. He won roughly two-thirds of voters ages 45 and older, the majority of voters in the state. Black voters were far more likely to support Biden than any other candidate. About 6 in 10 of those who attend religious services at least monthly backed Biden.

RELATED: Bloomberg to reassess after disappointing Super Tuesday results, according to AP source

Biden won about 60% of moderates and conservatives — and even about 40% of liberals, chipping away at Vermont Sen. Bernie Sanders' core supporters. Biden also received support from both college-educated voters and those without a degree.

Sanders continued his strength among young voters — winning about half of those under 30. About 40% of Latino voters supported Sanders, while about a third supported Biden.

After Biden's dominant win in South Carolina last week, Alabama was another test of his strength with black voters — and he performed just as well. A majority of Alabama’s Democratic primary voters are African American, and about 6 in 10 of them supported the former vice president. AP declared Biden the winner when polls closed in the state.

Overall, voters gave Biden an edge over other candidates as the one best able to handle issues related to race.

Biden also earned the support of older voters and religious voters, as well as voters across education levels.

In Alabama, voters were closely divided over whether they wanted a candidate who would bring fundamental change to Washington or one who would restore the political system to how it was before Donald Trump was elected in 2016. But they showed a slight preference for a candidate who will pursue practical, centrist policies to one pursuing bold liberal policies. 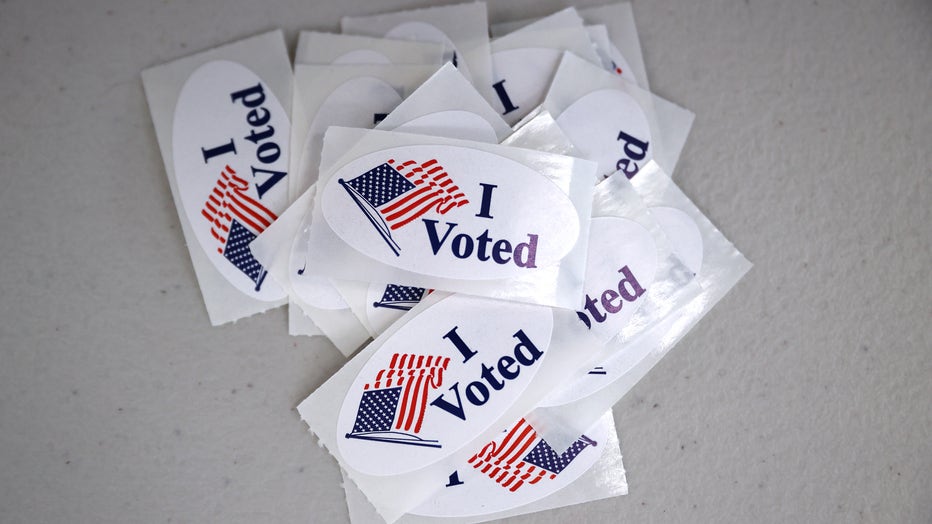 FILE - Photograph of 'I Voted' stickers are stacked on top of each other. (Photo by Chip Somodevilla/Getty Images)

California voters are looking for fundamental change, but a majority also say they want to see a candidate who will pursue centrist policies over one who will propose bold liberal policies. Voters in California split about evenly between self-described liberals and those who are moderate or conservative — setting it apart from most of the other states voting Tuesday.

Just about 20% say they are confident that the Democratic Party's nomination process is very fair; roughly a third say they are not confident.

And about a quarter of California voters said their vote in November will depend on who the Democratic Party nominates.

California's primary was won by Sanders.

Sanders appeared to connect with voters in Colorado on the issues and it paid off with a victory. Voters there considered both health care and climate change as the most important issues facing the nation, with about a third naming each.

On those two issues, voters say Sanders has an advantage over other candidates as the best positioned to handle both climate change and health care as president.

But other candidates muddle the picture on other issues. About as many say Sen. Elizabeth Warren or former New York Mayor Mike Bloomberg could handle the economy as say that of Sanders. Similar shares say Biden, Sanders and Warren would be best able to handle immigration.

Sanders won close to half of Latino voters in Colorado.

Women in Massachusetts divided their support across several candidates: Biden, Sanders and Warren, the hometown candidate, each got roughly a quarter of the vote. Men were slightly more likely to support Sanders over Biden, Warren or Bloomberg.

Voters in Massachusetts ranked both health care and climate change as the most important issues facing the country.

Close to 6 in 10 voters said they wanted a candidate who would bring fundamental change to Washington, while fewer said they would prefer to restore the political system to how it was before Trump was elected.

But it was clear that change in Washington doesn’t look the same to everyone. A majority said they preferred a candidate who will pursue practical, centrist policies to one pursuing bold liberal policies.

The AP has declared Biden the winner in Massachusetts.

About half of Democratic primary voters in Minnesota say they made up their minds just days before casting their ballots, likely a result of Minnesota Sen. Amy Klobuchar's departure from the race. Biden was aided significantly, with about half of those voters supporting his candidacy. The AP has called the race for Biden.

But for Minnesota voters, the Democratic nominee will be their choice in November no matter who is nominated. Just about 1 in 10 say their decision will depend on which candidate is top of the ticket against Trump.

Democratic voters in North Carolina — a general election battleground — were closely divided over whether they wanted a candidate who would transform Washington rather than return it to the way it was before Trump took office.

But an overwhelming share -- close to 9 in 10 -- did say it’s very important that a nominee is able to defeat Trump in November. Forty percent of those backed Biden, who won the state.

A wide majority say they will definitely vote for the Democratic candidate against Trump in the general election. Still, about 2 in 10 say their decision will depend on which Democrat is on the ballot in November, a share that might matter in the context of a competitive general election.

Comparable shares of white voters in North Carolina — about 30% — supported Biden and Sanders, with about 10% supporting Bloomberg and another 10% Warren. Among black voters, Biden had a clear advantage: About half supported him, while about a quarter went for Sanders and about 1 in 10 supported Bloomberg.

White voters divvied up their support between Sanders and Biden, with about a quarter going to each. Some also supported Bloomberg and Warren.

Black voters in Texas gave a clear advantage to Biden, while Sanders held a lead among Latino voters.

While Sanders continued to dominate voters under 30, Biden's edge over Sanders with older voters was cut somewhat by Bloomberg. About 40% of voters ages 45 and older supported Biden, with roughly another quarter supporting Bloomberg and close to 20% voting for Sanders.

Voters in the Democratic primary in Texas had health care on their minds, with close to 4 in 10 saying it was the most important issue facing the country.

Immigration was considered an important issue by just about 1 in 10 voters in the border state. But among all voters, border security is divisive. About half of voters said they favor increasing security along the U.S.-Mexico border, while roughly half are opposed.