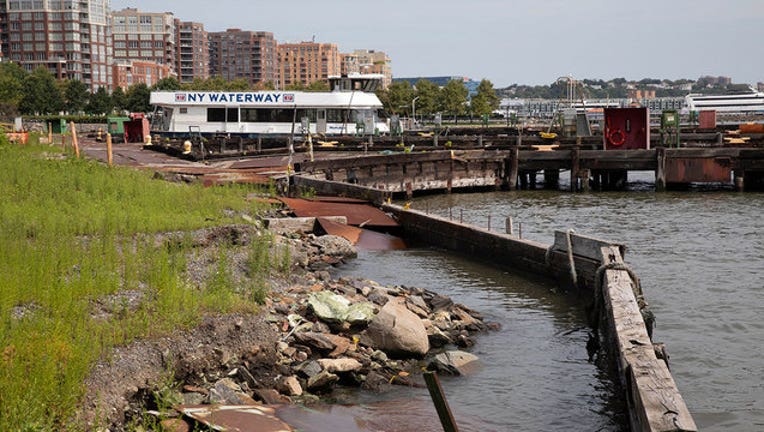 In this photo, an NY Waterway ferry is docked at the company's N.J. property. The battle over the future of a coveted slice of Hudson River waterfront is being rekindled, presaging what could be a costly legal fight. (AP Photo/Mark Lennihan)

A state study released this week concluded a spot on the Hudson River waterfront that is the subject of a heated court battle is the best alternative for a ferry refueling and maintenance depot.

The city of Hoboken is seeking to use eminent domain to acquire the land from the NY Waterway ferry company to provide the final link to its public park system and contends other sites on the waterfront are better suited for the ferry facility. Numerous environmental groups support the city's efforts.

NY Waterway, which bought the former Union Dry Dock site in Hoboken for $11.7 million in 2017, says other alternatives are unacceptable. The company currently fuels its ferries up the river in Weehawken, but says it is being forced to move.

New Jersey Transit's study published Thursday found a spot further south near the Hoboken rail terminal and others in Bayonne weren't better options due to location, cost or security concerns.

The Hoboken rail terminal site, which suffered extensive damage during 2012's Superstorm Sandy, poses security and safety issues because fuel and waste oil would be in proximity to the passenger terminal, the report concluded. The Sandy-damaged pier "is in disrepair and will need a full demolition and replacement for any use," it added.

Locations at the Military Ocean Terminal in Bayonne are more suitable physically but are inefficient for NY Waterway because its ferries would have to travel further to refuel, according to the report.

Buying the land and building a facility in Bayonne also would cost more than three times as much as the Union Dry Dock site - a low estimate of $34 million compared to $9 million, the report concluded.

In a statement, Hoboken Mayor Ravi Bhalla said a city-commissioned study last year showed the Hoboken terminal site was more suitable and that Bayonne could be used as well.

"NJ Transit's conclusion that Bayonne could support a ferry maintenance facility supports what we've said all along - that there are viable alternate locations other than Union Dry Dock, which we urge NY Waterway to consider," he said.

NY Waterway President Arthur Imperatore said in a statement that the study "confirms what we have said for 10 years: Union Dry Dock is the only suitable location for a ferry repair and maintenance facility."

The legal battle could take years. This month, Hoboken's council approved beginning eminent domain proceedings. If the body votes similarly in September, Bhalla will be authorized to offer NY Waterway $13 million for the land and then commence action to take the property if an agreement isn't reached.

NY Waterway is expected to contest the city's right to take the land, which would send the matter to court where a jury could eventually decide its fate.