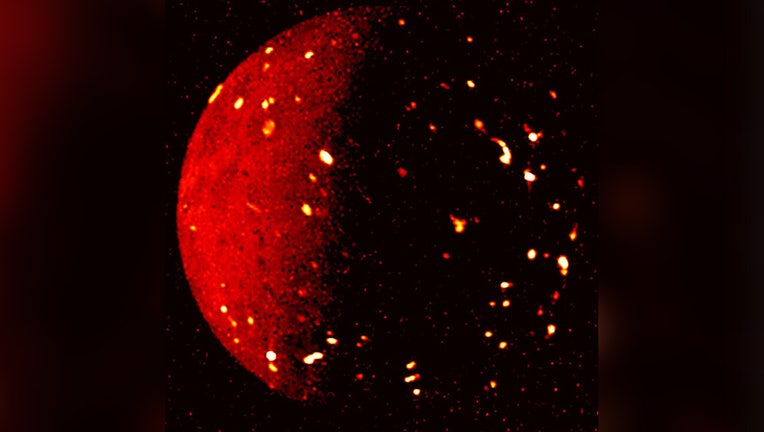 The volcano-laced surface of Jupiter’s moon Io was captured in infrared by the Juno spacecraft’s Jovian Infrared Auroral Mapper (JIRAM) imager as it flew by at a distance of was about 50,000 miles (80,000 kilometers) on July 5, 2022. Brighter spots i (NASA/JPL-Caltech/SwRI/ASI/INAF/JIRAM)

NASA's Juno spacecraft's mission to Jupiter has set its sights on the moon Io.

The agency said in a release, sharing a striking image of the moon's volcano-laced surface captured in the infrared by the Jovian Infrared Auroral Mapper this summer, that it was scheduled to image the Jovian moon on Thursday.

The July 5 photo was captured as the spacecraft flew by at a distance of about 50,000 miles, with brighter spots indicating where temperatures were higher.

"The team is really excited to have Juno’s extended mission include the study of Jupiter’s moons. With each close flyby, we have been able to obtain a wealth of new information," Juno Principal Investigator Scott Bolton, of the Southwest Research Institute in San Antonio, said in a statement. "Juno sensors are designed to study Jupiter, but we’ve been thrilled at how well they can perform double duty by observing Jupiter’s moons."

Io, the most volcanically active world in the solar system, will remain an object of the Juno team’s attention for the next year and a half.

Now in the second year of its mission to investigate Jupiter's interior, the solar-powered Juno had previously performed close flybys of Ganymede last year and Europa earlier in 2022. 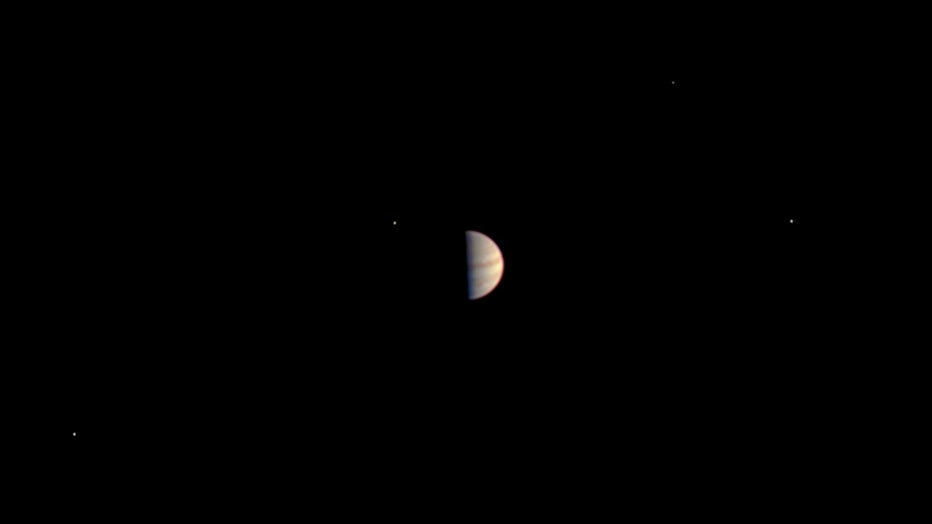 This is the final view taken by the JunoCam instrument on NASA's Juno spacecraft before Juno's instruments were powered down in preparation for orbit insertion. Juno obtained this color view on June 29, 2016, at a distance of 3.3 million miles (5.3 m (NASA/JPL-Caltech/SwRI/MSSS)

NASA said Juno scientists will use those flybys to perform the first high-resolution monitoring campaign on the magma-encrusted moon, studying Io’s volcanoes and how volcanic eruptions interact with Jupiter’s powerful magnetosphere and aurora.

The moon – which is a bit larger than Earth's moon – has hundreds of volcanoes, some erupting lava fountains dozens of miles high. 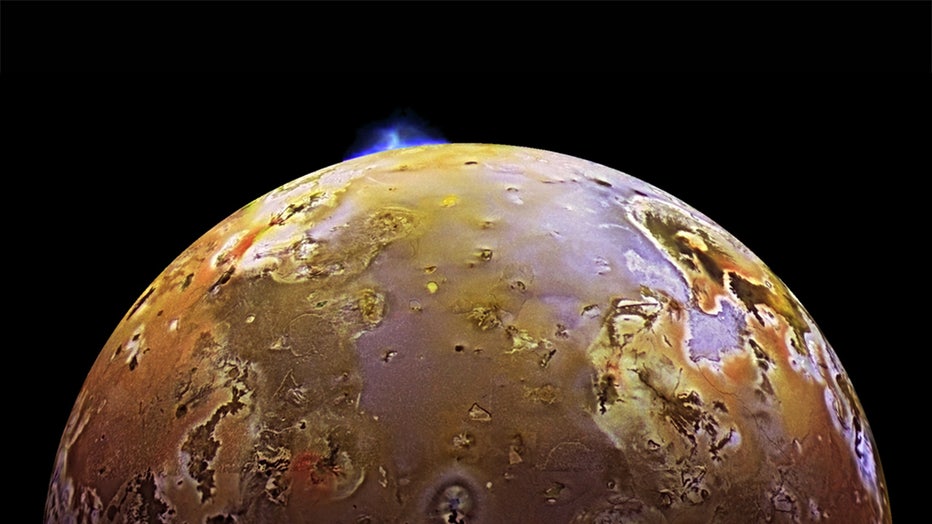 Its remarkable activity is the result of a tug-of-war between Jupiter's powerful gravity and smaller but precisely timed pulls from Europa and Ganymede.

Io was discovered in 1610 by famed Italian astronomer Galileo Galilei.

The discovery, along with three other Jovian moons, was the first time a moon was discovered orbiting a planet other than Earth.