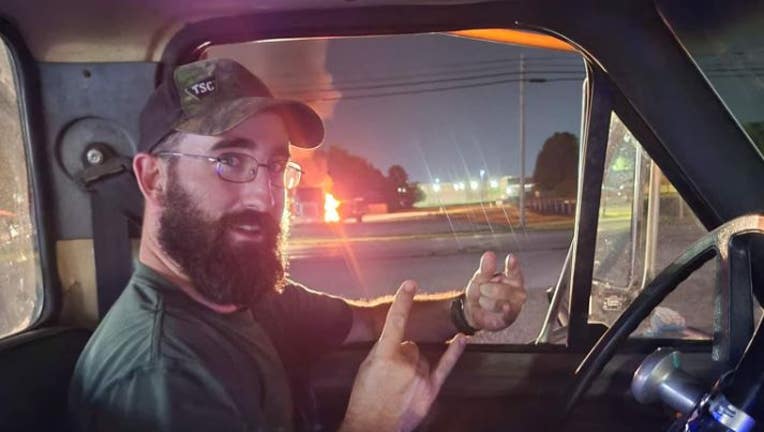 Image of Jacob T. McClanahan who was shot and killed by Justin Moore.

HODGENVILLE, Ky. - Authorities in Indiana said a Kentucky man who was stranded on the side of the road allegedly pulled out a shotgun and killed a firefighter who stopped to lend a helping hand, according to local reports.

Indiana State Police said 31-year-old Justin Moore, of Owensboro, Kentucky, traveled on state Road 135 when he ran out of gas at approximately 9:30 p.m. on Monday.

Eventually, a reserve officer with the Palmyra Police Department arrived to help Moore.

Shortly after, Jacob Tyler McClanahan, 24, a volunteer firefighter and employee of the Harrison County Highway Department was traveling down the same road with a friend when he noticed Moore stranded on the road.

Police said that during the interaction, McClanahan asked Moore if he was in possession of any weapons to which Moore replied he had a small knife on his person.

Investigators are not sure what led to the shooting but said after McClanahan asked Moore to put his knife away in his car, he reached into his vehicle, grabbed a shotgun and fired at McClanahan.

McClanahan was killed by the shotgun blast while the other reserve officer reached for his department-issued pistol eventually striking and killing Moore.

Soon after, police from several departments arrived at the scene in which life-saving measures were given to both Moore and McClanahan to no avail.

The reserve officer for the Palmyra Police Department who shot and killed Moore was wounded and transported to the Harrison County Hospital shortly after.

Authorities remain unaware as to why Moore, a Kentucky resident, was traveling in Indiana.

The Harrison County Fire Department where McClanahan volunteered, expressed their heartfelt condolences on social media expressing shock and confusion over the shooting.

"Nothing makes sense that anyone could be murdered while stopping and rendering aid," they wrote in a Facebook post.

"Jacob is a true hero that will forever be remembered living the selfless life he did. A true firefighter that was always there when you needed help. Godspeed Jacob T. McClanahan. Your brothers at Harrison Township will miss you. Gone but never forgotten," the department added.