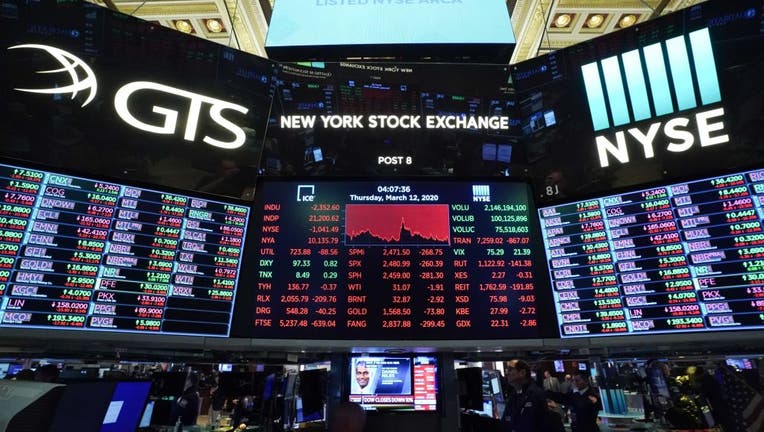 NEW YORK - The stock market rocketed higher before giving back its gains in the late afternoon as oil prices saw a sudden selloff.

The S&P 500, which was close to exiting its bear market, ended the session modestly lower. The Dow Jones Industrial Average also closed lower, giving up a gain of more than 900 points.

West Texas Intermediate crude oil, the U.S. benchmark, fell suddenly and sharply to close down by 9.39 percent to $23.63 a barrel amid concerns over supply builds and ahead of OPEC's emergency virtual meeting on Thursday.

While all three major averages fell, the S&P 500 briefly exited its bear market that began on March 12. The index needed to close above 2684.88 to officially exit.

The COVID-19 pandemic showed further signs of slowing with the number of new cases and deaths in New York and New Jersey declining for a second day on Monday, giving investors some hope early in the session. However, New York Gov. Andrew Cuomo said at Tuesday's news conference that deaths saw their biggest single-day spike.

Boeing announced production at its 787 plant in South Carolina will be temporarily suspended due to COVID-19. The planemaker suspended its operations in the Seattle area on Sunday because of the virus.

RELATED: Looking for work? These companies are hiring amid the coronavirus pandemic

Macy’s CFO Paula Price will leave the company effective May 31 and will stay on as an adviser through November. A search for her replacement is underway.

U.S. Treasurys were under pressure, causing the yield on the 10-year note to climb to 0.735 percent.

In Europe, Germany’s DAX surged 2.79 percent and France’s CAC spiked 2.12 percent. The FTSE in Britain, where Prime Minister Boris Johnson was placed in intensive care on Monday due to his battle with COVID-19, rose 2.19 percent.

RELATED: A guide to surviving financially as the bills come due

Get updates from foxbusiness.com.