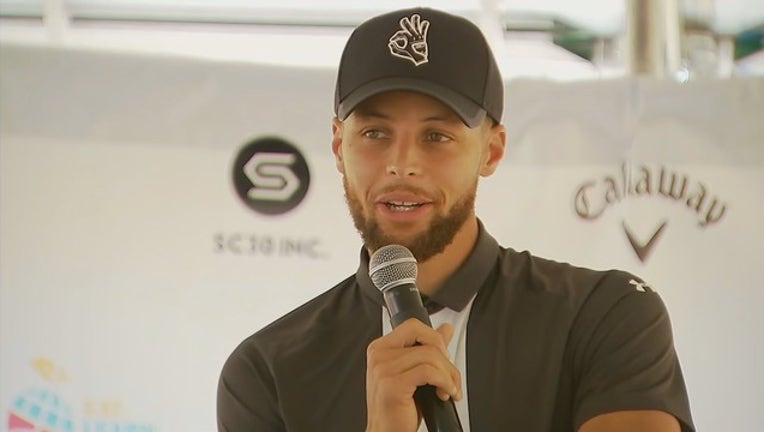 It’s believed to be the first time the predominantly Black school will have a Division I golf program – a historically white game -- in the university’s 152-year history. The hope is to have the teams up and running by the 2020-21 school year.

Athletic director Kery Davis said at a news conference that the money would be enough to hire a coach and keep the teams running for the next five years.

Three scholarships will also be given out, and the school will now be fundraising for an endowment to keep golf alive at in perpetuity.

“It’s not a little,” Davis said with a laugh in Washington, D.C., declining to say exactly how much it will cost.

Curry, who loves to hit the links when he’s not at Oracle Arena dribbling a ball or sinking a 3, said he’s “very excited” about expanding his passion.

“We’re ready to get this thing started with a bang,” Curry said. “Hopefully the news spreads.”

Curry, who played golf in high school, launched a mini-golf TV show, "Holey Moley," on ABC and who is often seen on the green with President Obama, also gave a nod to a new foundation he started with wife, Ayesha Curry, this summer, Eat. Learn. Play.

It’s a family-founded charity with a mission  help end childhood hunger, ensure universal access to quality education and promote healthy, active lifestyles. Curry emphasized that the focus is on helping children from Oakland, and that a requirement of the golfing scholarships will be for the students to volunteer in D.C. in those three areas. The foundation served 5,000 Oakland kids breakfast and scholarships at 20 camps this summer.

Howard University previously had a Division II golf program that shut down decades ago. The Washington Post reported that Howard's first attempt at a golf program began during the 1957-58 academic year and the team eventually won a Central Intercollegiate Athletic Association title. The team was discontinued in the 1970s.

The idea for the golf teams originated when Curry was at Howard earlier this year to screen a documentary that he produced, "Emanuel," about the murder of nine people at a Bible study at Emanuel African Methodist Episcopal Church in South Carolina by a white supremacist.

Otis Ferguson, then a junior at Howard, asked Curry to play golf, the Post reported. The two ended up talking about the mutual love of the sport, and Ferguson told Curry that Howard didn’t have a golf team at the time.