Parade for the Peacocks

Jersey City held a parade and rally for the men's basketball team from Saint Peter's University to celebrate their exciting run at the NCAA tournament.

The festivities included floats, music bands, local schools, teams, and several dignitaries, but the stars of the event were the 15 young men and Coach Shaheen Holloway who brought the small Jesuit school all the way to the Elite 8.

The parade stepped off at about 2 p.m. from Lincoln Park and continued along Kennedy Boulevard to Montgomery Street in front of the university where a large rally was held.

"I do think we'll have a lot of school spirit out here today and just a lot of pride in Jersey City and New Jersey," said Mayor Steven Fulop during FOX 5 NY morning program, ‘Good Day New York.’ "The coaches and the players are going to speak. We're going to give them a key to the city. It's going to be a good day."

On Sunday, the North Carolina Tar Heels ended the Peacocks' Cinderella story by beating them 69-49 in Philadelphia. The outcome was really never in question. North Carolina was up 38-19 at halftime. 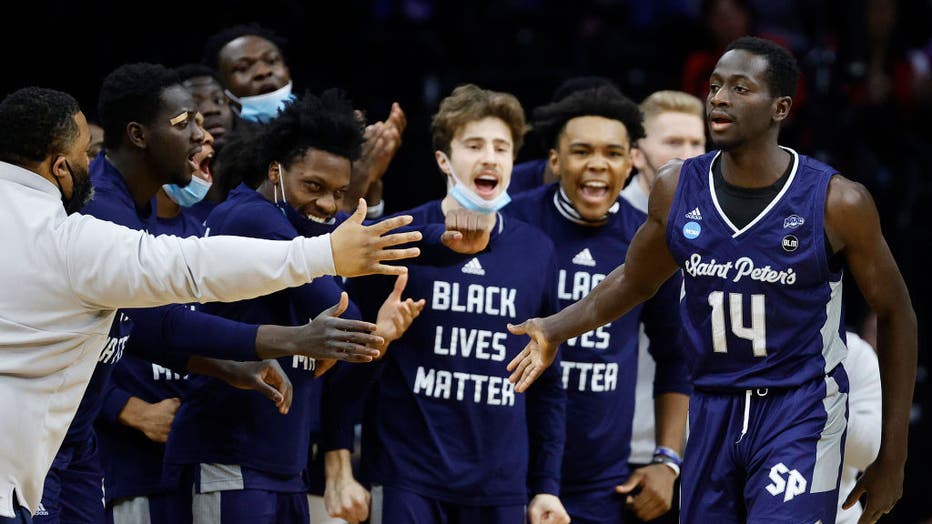 Hassan Drame #14 of the St. Peter's Peacocks reacts with teammates on the sidelines in the first half of the game against the Purdue Boilermakers in the Sweet Sixteen round of the 2022 NCAA Men's Basketball Tournament at Wells Fargo Center on March 2

We're going to give them a key to the city. It's going to be a good day.

What and where is Saint Peter's University?

The success of the basketball team has shined the spotlight on Saint Peter's University, a tiny Jesuit school in New Jersey.

The Peacocks had won 10 games in a row averaging 75 points a game, but their offense was smothered by the 8th seeded Tar Heels.  They end their season with a 22-12 record.

Saint Peter's was winless in its three previous trips to the NCAA Tournament.

Fans who couldn't make it to Philadelphia gathered at St. Peter's University in Jersey City on Friday to see their beloved Peacocks defeat Purdue to become the first 15 seed to advance to the Elite Eight in NCAA Tournament history.

But no 15th seed team had ever gone as far in the tournament as St. Peter's did this year. They started off by beating No. 2 Kentucky in their first game, a team that some thought would vie for the championship. They went on to also beat Murray State and Purdue.

Holloway, 45, is leaving St. Peter's for Seton Hall where he was announced as the new head men's basketball coach.

The Queens native played for the Pirates of the Big East Conference and lead them to an NCAA tournament appearance.

The young men and coach of the Saint Peter's basketball team are excited to be in the Sweet 16 and are thankful for all the support.