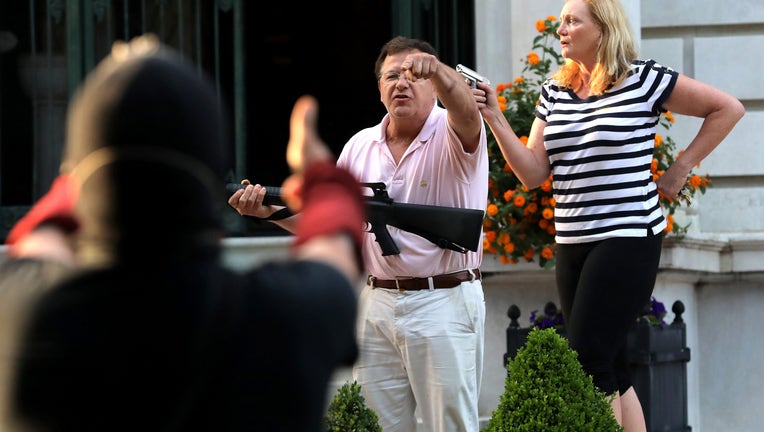 LOS ANGELES - A St. Louis couple who waved firearms at Black Lives Matter protesters outside their home in June will appear virtually at next week’s Republican National Convention to express their support for President Donald Trump.

A Trump adviser on Monday confirmed the participation of Patricia and Mark McCloskey in the convention. The news was first reported by The Washington Post.

The McCloskeys, who are White, have claimed they were protecting themselves from protesters marching on their private street, but they were each charged by a local prosecutor with one felony count of unlawful use of a weapon. Trump has been critical of their treatment and has spoken out in defense of the couple.

On June, 28, protesters were marching to the home of Mayor Lyda Krewson, when they veered onto a private street where the McCloskeys’ $1.15 million home sits. Mark McCloskey came out with a semi-automatic rifle and his wife emerged with a semi-automatic handgun, according to a probable cause statement filed in support of the charges. No shots were fired, but St. Louis’ top prosecutor Kim Gardner said their actions risked creating a violent situation.

When are the 2020 presidential debates?

With many of the usual staples of presidential campaign politics scrapped because of the pandemic, the debates between President Trump and Joe Biden likely will take on outsized importance.

Following the incident, the couple were both charged by Gardner for a felony unlawful use of a weapon. The charges were decried by Trump.

The McCloskeys were not arrested, but were issued summons to appear in court. Their first hearing is scheduled for Aug. 31.

Gardner, St. Louis' first Black circuit attorney, said in an interview with The Associated Press that she will not seek jail time but will recommend a diversion program such as community service.

Mark McCloskey, on Tucker Carlson’s show on FOX News on July 21, questioned why he and his wife were charged but protesters were not. “It’s a bizarre, upside-down world,” McCloskey said.

The White couple in their early 60s are both lawyers. Other Republicans were also critical of the charges, but Gardner said the actions of the McCloskeys risked bloodshed.