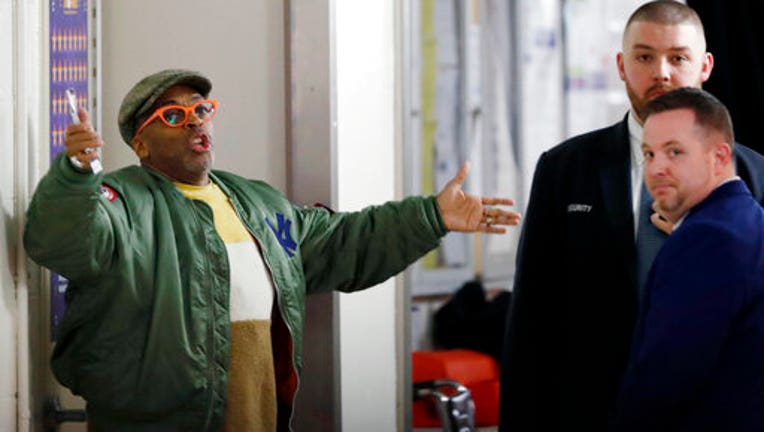 NEW YORK (AP) — Spike Lee still has his courtside seat, though the New York Knicks had to tell their superfan to find another way to get there.

Lee said he won't be sitting there the rest of this season, anyway.

The Oscar-winning writer-director told ESPN on Tuesday he wouldn't be attending another Knicks home game this season after a disagreement with Madison Square Garden officials a night earlier over which elevator he could use.

“I’m done for the season. I’m done,” Lee said on the program “First Take” while wearing a Knicks hat.

A video circulated online during New York's 125-123 victory over Houston on Monday showing Lee getting frustrated and yelling at Garden security outside an elevator, leading to confusion that he may have been thrown out of the building.

However, a Knicks spokesman said that was untrue and that it was simply an issue of Lee using the wrong entrance.

Lee said he had has been using the employee entrance on 33rd Street for more than two decades as a season ticket holder. The Knicks wanted him to use the entrance for celebrities, which is two blocks away.

But Lee said he had already had his ticket scanned so he refused to leave, fearing that he wouldn't be allowed back in. He said he told security to “arrest me like my brother Charles Oakley” — a reference to the former Knicks forward's ejection from a game and ensuing arrest in 2017.

Lee said he was not told when the elevator policy changed, adding that he used the employee entrance just last week for another event.

“They never said when the thing changed, so why not call me?” Lee said. “When my deposit’s due, this astronomical price for Knicks tickets and I’m one day late, my phone is ringing off the hook.”

Lee has long been one of the Knicks' most visible and demonstrative fans. He spoke to MSG executive chairman James Dolan at halftime Monday and was still in his sideline seat in the fourth quarter.

The Knicks said Lee and Dolan had resolved the issue at halftime, though Lee disputed that.

“I’m being harassed by James Dolan and I don’t know why,” he said.