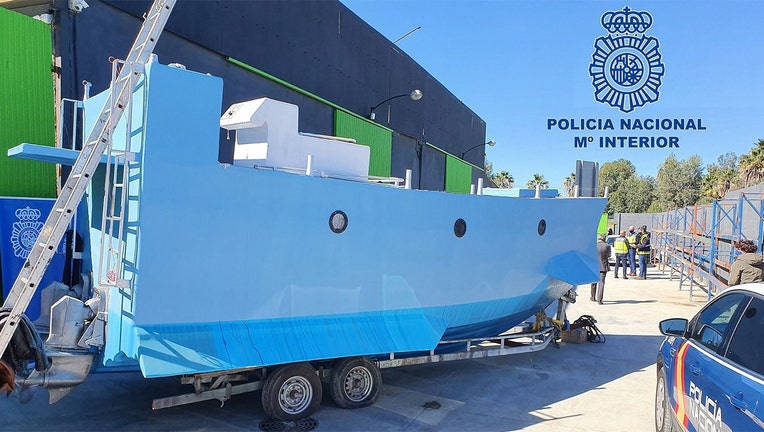 In this handout photo from the Spanish National police, a homemade semi submersible submarine sits outside a warehouse in Malaga, Spain. (Police Nacional)

MADRID - Spanish police announced Friday that they seized a homemade narco-submarine able to carry up to 2 metric tons (2.2 tons) of cargo.

Police came across the 9-meter-long (30-feet-long) craft last month while it was being built in Málaga, on southern Spain’s Costa del Sol, during a broader international drug operation involving five other countries and the European Union crime agency Europol.

The 3-meter-wide (10-feet-wide) semisubmersible craft is made of fiberglass and plywood panels attached to a structural frame, has three portholes on one side and is painted light blue. It has two 200-horsepower engines operated from the inside.

Rafael Perez, head of the Spanish police, said the vessel had never sailed.

"We think it was going to go into the high seas to meet a mother ship (to) take on board the drugs," probably cocaine, before returning to Spain, Perez told reporters.

"It is like an iceberg," he said of the vessel’s structure. "In practice, nearly all of it goes under water apart from the top, which is the only part of it that would be seen from another ship or a helicopter."

Similar drug-smuggling vessels have in the past been discovered in the Atlantic Ocean, especially off Central and South America. They sit low in the water to escape detection and rarely are able to fully submerge.

The wider police operation against the alleged international smuggling ring netted hundreds of kilos of cocaine, hashish and marijuana in various places in Spain, with 52 people arrested.

Spanish police said in a statement that police in Colombia, the United States, the United Kingdom, the Netherlands and Portugal also were involved in the operation.