John Sterling, the voice of the New York Yankees, got struck in floodwater in New Jersey while driving home from Yankee Stadium. His colleague Rickie Ricardo, who does the Yankees play-by-play for Spanish-language radio, found him.

NEW YORK (AP) - Yankees broadcaster John Sterling was helped out of his flooding car by Spanish radio play-by-play man Rickie Ricardo on Wednesday night after Sterling got stuck trying to drive home after a game.

Sterling and Ricardo both called New York's game at the Los Angeles Angels from Yankee Stadium because the radio crews have not resumed traveling with the team as part of COVID-19 protocols.

Ricardo told WFAN on Thursday the 83-year-old Sterling was the first to leave the stadium after the game concluded around 10 p.m., while Ricardo stayed later for a Spanish postgame show.

Ricardo said when he finally left the park, the lobby at Yankee Stadium had water up to his ankles, and he encountered several closed and flooded streets as the East Coast was pummeled by the remnants of Hurricane Ida. The storm killed at least 12 people in New York City, including one who drowned in a car and 11 more in basement apartments, police said.

Sterling's broadcast partner, Suzyn Waldman, called Ricardo as he was trying to find a route to his home in New Jersey and told him that Sterling was stuck in his car on River Road in Edgewater, New Jersey, just over the George Washington Bridge.

"I've seen how bad it gets flooded on River Road in Edgewater, and with the kind of rain we had, I can only imagine," Ricardo said. "So I said, ‘Suzyn, I’m on my way. I more or less know where he lives. I'll figure out where he’s at and see what I can do.'"

Ricardo called Sterling and kept him on the phone until he found him in one of roughly 25 vehicles stuck in flooding that covered the tires of most cars. Ricardo, who drives a Jeep, pulled up behind Sterling's car and helped him get out of the vehicle. He said it took them an hour to find a clear path to Sterling's apartment about a half-mile away, but he eventually got Sterling there safely.

TV broadcaster Michael Kay also said he had trouble getting home Wednesday, tweeting that he planned to wait out the storm at Fordham University in the Bronx. He also tweeted photos of the outfield at Yankee Stadium completely underwater during the game. 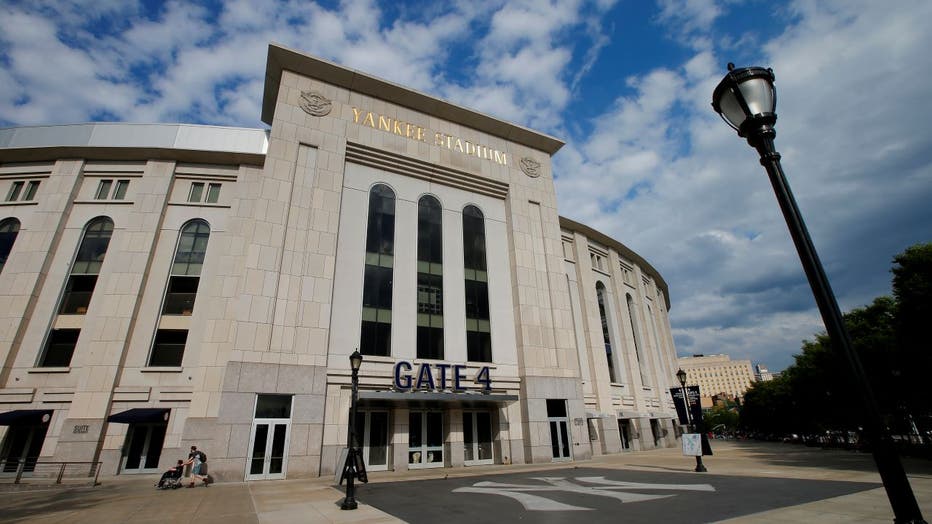 Exterior of Yankee Stadium after a game. (Photo by Rich Schultz/Getty Images)