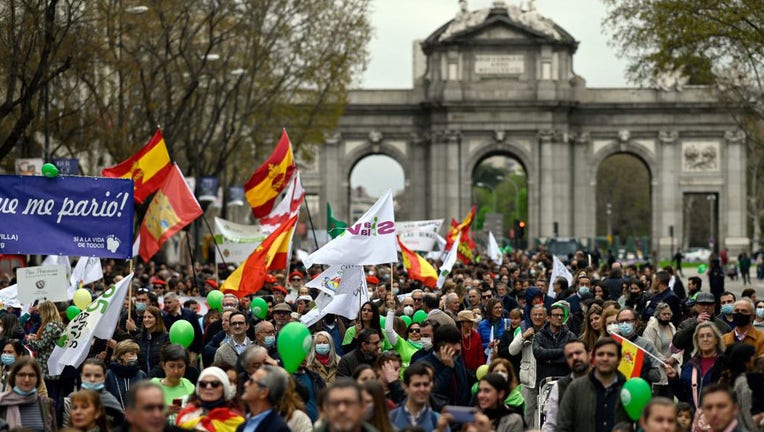 Demonstrators take part in the anti-abortion march "Si a la vida" (Yes to life) on March 27, 2022 in Madrid. (Photo by Oscar del Pozo/AFP via Getty Images)

The measures are part of a package of proposals that will be sent to the Spanish parliament for debate. The package includes an extension of abortion rights, scrapping the requirement for 16- and 17-year-olds to obtain parental consent before terminating a pregnancy.

The Spanish move comes just as the U.S. Supreme Court appears poised to reverse that country's constitutional right to abortion, in place for nearly a half-century.

The Spanish government also proposes giving workers who are experiencing period pain as much time off as they need, with the state social security system — not employers — paying for sick leave. As with any other temporary medical incapacity, a doctor must sign off on the health problem.

The driving force behind the law is the junior member of Spain’s left-wing coalition government, the "United We Can" Party. It was not immediately clear whether the Socialist-led coalition has enough support in parliament to pass the proposed legislation, which could take months.

The government, which came to power almost four years ago, has made women’s rights one of its political banners. The Cabinet has 14 women and eight men in ministerial positions.

Abortion on demand is permitted in Spain through the 14th week of pregnancy. The draft bill also scraps the requirement of a three-day waiting period between requesting an abortion and the pregnancy being terminated.

The latest generation of contraceptive pills, including morning-after pills, are to be provided free of charge by the national health service under the proposals. They currently cost up to 20 euros ($21) at pharmacies, according to the government.

RELATED: 'Bans off our Bodies': Abortion rights supporters rally across the U.S.

Spanish Equality Minister Irene Montero says if the proposals are approved by lawmakers, Spain will be the first European country to grant paid sick leave for period pains.

"The days of (women) going to work in pain are over," Montero said, adding that government institutions had to "discard taboos, stigmas and guilt regarding women’s bodies."

She expressed support for feminist movements fighting for abortion rights in the United States and Poland, as well as in Chile, Argentina and Colombia.

Government officials have said that slight discomfort would not qualify women for menstrual leave. The proposed law targets more serious symptoms, such as diarrhea, fever and bad headaches, they say.

The proposals stirred debate over whether the menstrual leave measure would help or hinder women in the workplace, with some fearing women could be stigmatized.

Some private companies in Europe have voluntarily adopted period policies. Parts of Asia, ranging from Japan to South Korea, have long had menstrual leave rules, though the extent to which they are used has been debated.

Italy considered the idea in 2016, proposing a bill that would have provided three fully paid days off to workers who obtained medical certificates. The proposal failed to progress before the parliamentary term ran out in 2018.