After a girl left her longtime Winnie-the-Pooh stuffed animal on a flight, Southwest Airlines came to the rescue.

LAS VEGAS - Southwest Airlines came to the rescue for a girl who left her beloved teddy bear on a recent flight from Kansas City to Las Vegas.

On Sunday, Rebecca Kurtz put a call out on Twitter for help in finding her 12-year-old daughter’s Winnie-the-Pooh.

“Ok Internet and @SouthwestAir I need your help. My girl left her Pooh Bear on flight 2741 from Kansas City to Vegas on 2/15. He was her very first Christmas present 12 years ago! Help us bring him home,” Kurtz wrote.

Two days later, Southwest responded with images of the beloved bear hanging out at the airport with a fellow bear pilot and bear airport worker: “This the guy you're looking for?” 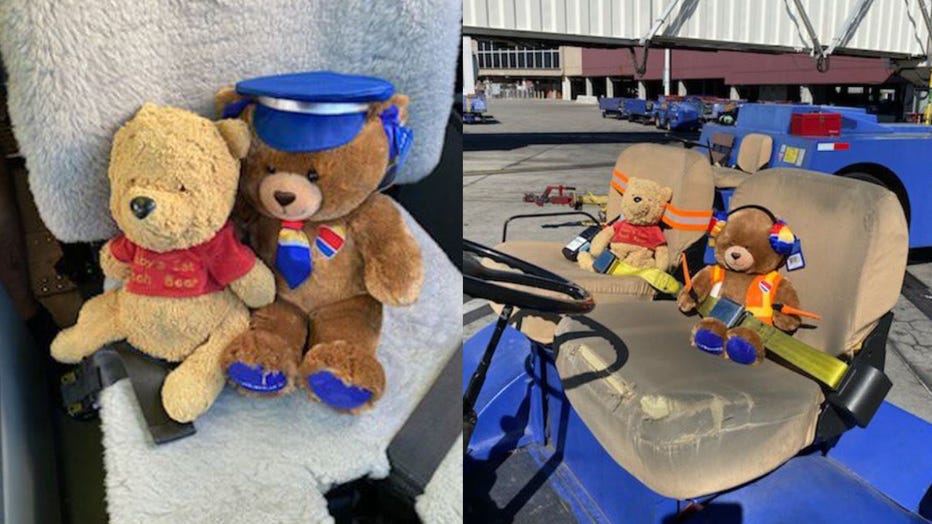 After Rebecca Kurtz asked Southwest Airlines to look for her daughter’s lost Pooh Bear, the company came through and reunited her 12-year-old daughter with the beloved stuffed animal. (Photo credit: Southwest Airlines)

Kurtz later thanked the airline and one of its employees for helping to find the stuffed animal.

“@SouthwestAir outdoes themselves again,” she wrote in a follow-up tweet. “Huge shout out to Gareth Reynolds at the Las Vegas station for finding our Pooh Bear! And it looks like Pooh went on a bit of an adventure while we were gone.”

Southwest added that it looked like Pooh Bear “had a great time at the Hundred Acre Airport,” in reference to Winnie-the-Pooh’s fictional home in the Hundred Acre Wood, but noted that he was ready to “be back home and hibernate after his big adventure.”