Scientists are reporting troubling signs that some recent mutations of the virus that causes COVID-19 may modestly curb the effectiveness of two current vaccines, although they stress that the shots still protect against the disease.

Researchers expressed concern Wednesday about the preliminary findings, in large part because they suggest that future mutations could undermine vaccines. The research tested coronaviruses from the United Kingdom, South Africa and Brazil, and was led by Rockefeller University in New York with scientists from the National Institutes of Health and elsewhere.

A different, more limited study out Wednesday gave encouraging news about one vaccine's protection against some of the mutations.

One way vaccines work is to prompt the immune system to make antibodies that block the virus from infecting cells. The Rockefeller researchers got blood samples from 20 people who had received either the Moderna or Pfizer vaccine and tested their antibodies against various virus mutations in the lab.

New York Gov. Andrew Cuomo says the federal government needs to step up the distribution of vaccine doses to New York and all the other states. He is also concerned that the SARS-CoV-2 virus could mutate into a vaccine-resistant strain.

With some, the antibodies didn't work as well against the virus -- activity was one-to-threefold less, depending on the mutation, said the study leader, Rockefeller’s Dr. Michel Nussenzweig.

"It’s a small difference but it is definitely a difference," he said. The antibody response is "not as good" at blocking the virus.

Earlier research established that the two vaccines are about 95% effective in preventing COVID-19 illness.

The latest findings were posted late Tuesday on an online website for researchers and have not yet been published in a journal or reviewed by other scientists. Nussenzweig is paid by the Howard Hughes Medical Institute, which also supports science coverage at The Associated Press. The university has applied for a patent related to his work.

The coronavirus has been growing more genetically diverse, and scientists say the high rate of new cases is the main reason. Each new infection gives the virus a chance to mutate as it makes copies of itself. 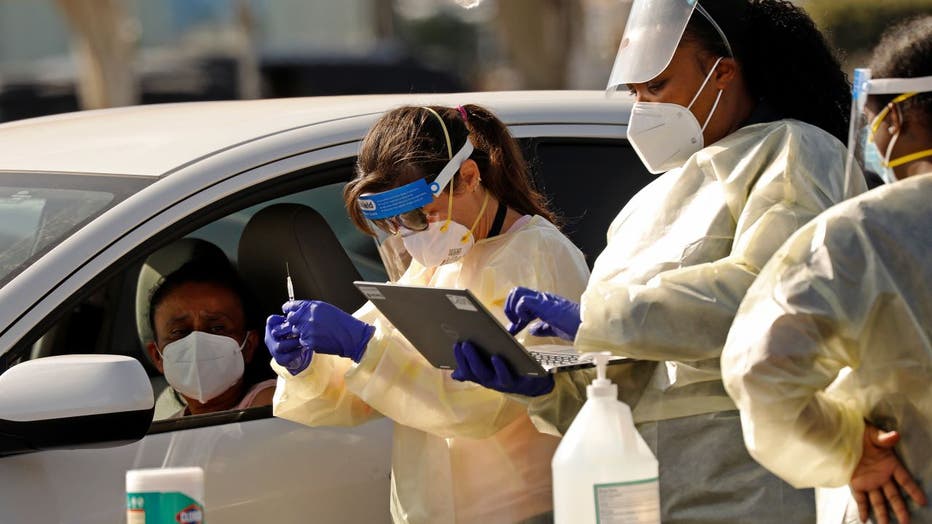 Staff and volunteers distribute the COVID-19 vaccine to people as they remain in their vehicles at The Forum in Inglewood. (Al Seib / Los Angeles Times via Getty Images)

Recent variants, or versions of the virus that emerged in the U.K., South Africa and Brazil seem to spread more easily and scientists say that will lead to more cases, deaths and hospitalizations. The new variants do not seem to cause more serious disease but their ability to eventually undercut vaccines is a concern.

E. John Wherry, an immunology expert at the University of Pennsylvania, said the Rockefeller scientists are "among the very best in the world" at this work and their results are concerning.

"We don’t want people thinking that the current vaccine is already outdated. That’s absolutely not true," he said. "There’s still immunity here ... a good level of protection," but the mutations "do in fact reduce how well our immune response is recognizing the virus."

NY going to manufacturers to get vaccine

Gov. Cuomo says the state is going to bypass the federal government to try to get more of the COVID-19 vaccine.

The news comes at "a really important time in the pandemic," said Dr. Buddy Creech, a vaccine specialist at Vanderbilt University,

"We’ve got an arms race between the vaccines and the virus. The slower we roll out vaccine around the world, the more opportunities we give this virus to escape" and develop mutations, he said.

"This is going to be kind of a slow walk of evolution. We’re going to have to have tools that slowly develop with it," such as treatments that offer combinations of antibodies rather than one, he said.

Dr. Drew Weissman, a University of Pennsylvania scientist whose work helped lead to the Moderna and Pfizer vaccines, said the antibody findings are worrisome, but noted that vaccines also protect in other ways, such as spurring responses from other parts of the immune system. The new work involved only 20 people and not a huge range of ages or races, "and all of that matters" in how generalizable the results are, he said.

On Wednesday, Pfizer and its German partner BioNTech reported a second round of reassuring findings about its vaccine against one of the variants.

Earlier this month, Pfizer and researchers at the University of Texas Medical Branch said that the vaccine remained effective against a mutation called N501Y from new variants found in the U.K. and South Africa. Likewise, there was no sign of trouble when they tested some additional mutations.

To help fight the spread of the coronavirus, New York City is trying to ramp up its vaccination process, opening new sites at NYCHA residences to ensure underprivileged communities are not left behind.

The latest work tested all the mutations from the variant from the U.K. at once rather than one-by-one. Tests from 16 vaccine recipients showed no big difference in the ability of antibodies to block the virus, the researchers said in a repor t.

Pfizer didn’t immediately comment about the Rockefeller findings, but its chief scientific officer, Dr. Philip Dormitzer, previously said next steps include testing the vaccine against additional mutations found in the variant from South Africa.

Moderna and AstraZeneca, which makes a different type of COVID-19 vaccine used in some countries, also have been testing how their vaccines hold up against different mutations.

If the virus eventually mutates enough that the vaccine needs adjusting — much like flu shots are altered most years — tweaking the recipe wouldn’t be difficult for vaccines made with newer technologies. Both the Pfizer and Moderna vaccines are made with a piece of the virus genetic code that is simple to switch.

"We are shooting ourselves in the foot by allowing unmitigated transmission of this virus" and not doing "common sense" measures such as mandating mask-wearing as some other countries are doing, he said.

"How can the bars and restaurants be full? It’s like ‘what pandemic?’ We’ve reaped the seeds we’ve sown," he said.