A North Texas Uber driver went the extra mile in her good deed for one of her customers.

BURLESON, Texas - A North Texas Uber driver went the extra mile in her good deed for one of her customers.

The mom of four left a message behind on that customer's doorstep that launched a social media campaign to try and find the woman.

Tim Wilkinson is homebound after suffering a stroke several years ago. Before the incident, he was active and always on the go with family and friends.

Heather Durgin is a driver for Uber Eats and a wife and mom of four.

A recent food delivery brought them together.

"He asked me, ‘Hey, I don’t have the capability in this hand to untie that knot. Will you please untie the bag for me? And I said sure!" Durgin recalled.

Wilkinson’s and Durgin’s meeting ended there, but it really didn’t. 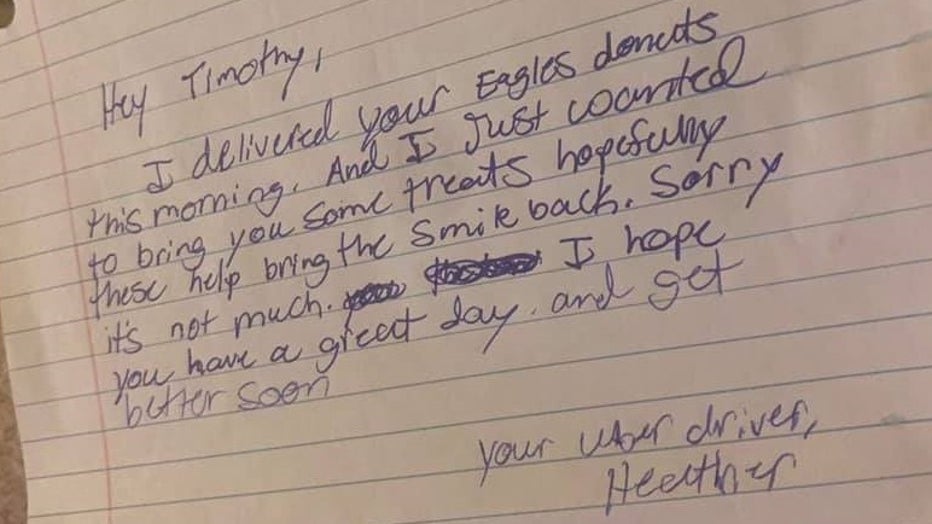 Durgin was moved to put together a care package and then returned to the apartment and left it at the door. She included hot cocoa, a red blanket and other items.

"It made me cry. After I saw what it was, it made me cry," Wilkinson said. "I reached out to Lauren because I didn’t know how to get a hold of her."

Wilkinson is referring to FOX 4’s Lauren Przybyl, who in response made a Facebook post in hopes that someone knew the uber driver named "Heather" who delivered in Burleson.

The result ended in a compassionate meet-up and a new social media frenzy with dozens of folks reacting with "#beaheather".

"I wanted to make sure she knew that it was appreciated," Wilkinson said.

"It wasn’t to get anyone to recognize me for doing it," Durgin said. "I think people just need to stop and take a deep breath for a second in their busy lives and look around and see people that might just need a smile or a hug."