A snowmobile tour group got stranged for hours on Langjökull, a glacier in Iceland. Dozens of emergency workers drove through a blizzard to get to the tourists on Jan. 7, 2020. (Video sources: Edvard Williamsson and @hjalparsveitskatakopavogi via Storyful)

ICELAND - A snowmobile tour group became stranded on a glacier in Iceland during a blizzard on Tuesday. The outfitter leading the 39 tourists, including some Americans, managed to make a distress call from Langjökull, the second-largest glacier in Iceland.

As many as 200 emergency workers responded to the glacier to rescue the tourists, some of whom were children, The Reykjavik Grapevine reported.

Nicole Smith, an American tourist, told the BBC that the group was stranded in the whiteout conditions for more than five hours. She said they hid behind the snowmobiles to protect themselves from the snowstorm.

"We actually did think that we were going to die out there," she said.

HSSK, a rescue agency in Kopavogur, shared a video with Storyful showing crews driving through the blizzard to access the stranded tourists on the glacier.

Edvard Williamsson, a member of the Air Ground Rescue Team of Reykjavík, shared a video showing emergency vehicles with their hazard lights on parked on the glacier.

Williamsson said he was called to the glacier at around 8 p.m. and arrived at midnight "in very bad weather." He said rescuers brought the tourists to a nearby mountain hut.

Rescuers treated some of the tourists for frostbite but no other major injuries were reported.

Police are investigating the incident because weather warnings were in place that day.

Langjökull is a popular destination for skiing, hiking, and snowmobile trips, according to the website Guide to Iceland. 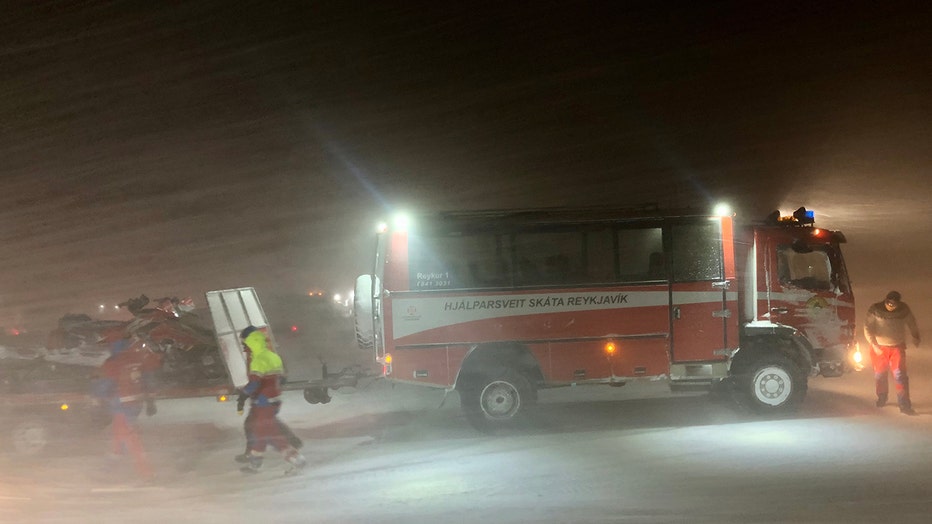 Dozens of rescuers deployed to rescue a snowmobile tour group that was stranded on a glacier in Iceland, Jan. 7, 2020. (Edvard Williamsson via Storyful)