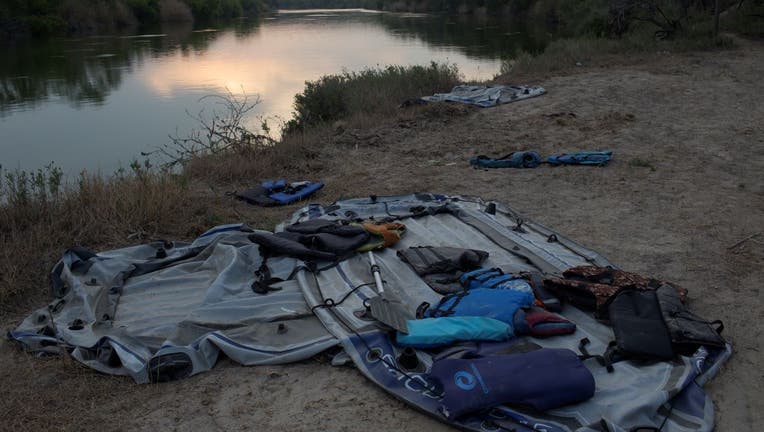 Discarded rafts, used by smugglers to ferry refugees across the Rio Grande River into the United States from Mexico, litter the U.S. side of the border after being punctured by Border Patrol agents, April 11, 2021, in Roma, Texas. (Photo by Andrew Li

Drug smugglers attempting to float a Ford Ranger pickup truck across the Rio Grande River in Texas was just one of several incidents on Thursday that led to Border Patrol agents seizing a total of roughly 60 pounds of cocaine and nearly 900 pounds of marijuana.

According to the Customs and Border Patrol (CBP), agents working near Brownsville saw a white Ford Ranger driving away from the banks of the Rio Grande. When they responded, the vehicle changed direction and drove back towards the river.

Smugglers then tried to load the vehicle onto a makeshift raft that had been used to bring it into the United States, but the truck got stuck on the riverbank. Its driver was seen jumping into the river and fleeing into Mexico.

Border Patrol agents ended up confiscating 32 bundles of marijuana worth over $500K.

Agents working a the Javier Vega Jr. Checkpoint encountered a man driving a white sedan during an immigration inspection when a drug-sniffing dog alerted its handler to the trunk area of the vehicle. The car passed further inspection and was allowed to leave, but other law enforcement was alerted to the suspicious vehicle.

Members of the Kenedy County Sheriff's Office found the car near Sarita, Texas, where it was seen entering a nearby ranch through an open gate. Authorities said the driver attempted to run away from the car but was quickly arrested.

Upon being searched, agents discovered narcotics throughout the car, including methamphetamine pills, THC edibles, marijuana, mushrooms, and Xanax tablets.

Finally, later that evening at the same checkpoint, agents inspected the driver of a Ford truck towing a flatbed trailer. A drug-sniffing dog alerted its handler to the trailer, and the vehicle was taken for further inspection. There, the dog alerted to two pallets of topsoil on the trailer, which contained several plastic-wrapped bundles of marijuana.