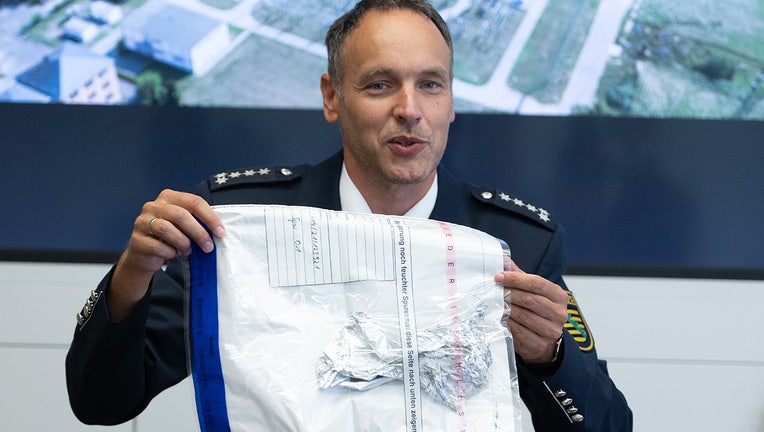 Thomas Geithner, police spokesman, shows the remains of the metal foil of a balloon discovered in the substation Dresden-Süd during a press conference.(Photo by Sebastian Kahnert/picture alliance via Getty Images)

BERLIN - German police are investigating the source of a balloon that caused a massive blackout in and around the eastern city of Dresden.

Authorities said the metal foil balloon caused a short-circuit at an electricity substation in Dresden shortly after 2 p.m. Monday, causing a power outage that affected hospitals, trams, factories, and about 300,000 households. Dozens of people were trapped in elevators until electricity about an hour later.

Claudius Rokosch, a spokesman for utility company SachsenEnergie, said Tuesday that the charred, aluminum-covered balloon found at the substation featured a clear warning not to fly it near electrical wires.

Thomas Geithner, a spokesman for Dresden police, said investigators don't currently have any evidence that the balloon was directed into the overhead cables intentionally.

"We are currently working on the assumption that at best it was careless, or simply a coincidence," he said, adding that the lack of a claim of responsibility also indicated it wasn't a politically motivated attack.