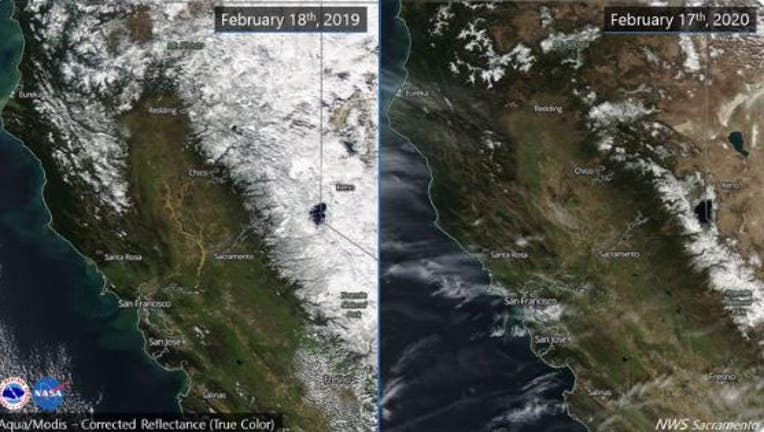 OAKLAND, Calif. - Aerial images over the Sierra taken this week show that the snow pack is below normal for this time of year, as scientists say drought has returned to California due to a significantly dry winter.

The National Weather Service tweeted out side-by-side NASA photos showing the difference in snow over the Northern California mountains comparing Monday to about the same time last year. Last year's photo showed a lot of white snow over the Sierra. This year's photo showed a lot of brown and green hills. According to the weather service, the snowpack is 58 percent below normal this time of year.

The photographs come after the U.S. Drought Monitor released a weekly report last week designating just over 9.5% of the state, including the central and southern Sierra Nevada and adjacent areas of the Central Valley, as being in moderate drought.

California had been drought-free since the early December.

A week earlier, the abnormally dry status applied to the Central Valley and a swath from the San Francisco Bay Area to the Sierra, as well as parts of the California-Oregon border.

The National Weather Service said there is no change in the dry pattern through the month of February. And if there’s no rain, many locations will be nearing the driest combined January and February on record.

State water authorities have noted that, fortunately, reservoirs are either at or above historical averages due to a wet 2019.