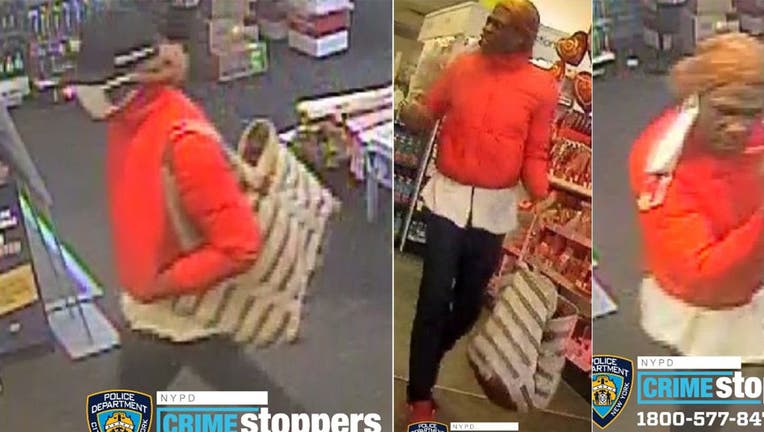 The NYPD was searching for the shoplifter who assaulted a Duane Reade worker who caught him in the act, said police. (NYPD)

NEW YORK - The NYPD was searching for the shoplifter who viciously assaulted a Manhattan Duane Reade worker who caught him in the act.

On Friday, at about 10:27 a.m., the suspect took items out of the freezer at the Morningside Heights location and put them in his bag. The 21-year-old employee told the man to put them back in the freezer. That's when the suspect punched the woman, pulled her by the hair and threw her to the ground, said police.

The suspect left the store and headed eastbound on Broadway.

The suspect was described as a dark-skinned male approximately 40 years old, 6' tall, 200lbs and was last seen wearing a red jacket, blue jeans, and red boots.

The NYPD shared several photos of the man.

A reward was offered of up to $3,500 for information that leads to the suspect's capture.

Anyone with information in regard to this incident is asked to call the NYPD's Crime Stoppers Hotline at 1-800-577-TIPS (8477).  The public can also submit their tips by logging onto the CrimeStoppers website or on Twitter @NYPDTips. All calls were strictly confidential, said police.

It wasn't the first violent assault inside a Duane Reade in Manhattan. In December, an NYPD officer was inside the location at East 34th Street in Murray Hill when she was notified by a member of the staff that the suspect, a known shoplifter at the store, was once again stealing at the location.

The serial shoplifter punched the uniformed NYPD officer in the face, breaking a bone.

The NYPD is on the hunt for a shoplifter who punched a NYPD officer, breaking a bone in her face. MORE: https://tinyurl.com/35ncnndz

Shoplifting was on the rise across the city. According to the NYPD, there has been a 15 percent spike in retail theft over the last two years.

Actor Michael Rapaport documented a shoplifter making off with items recently at his local Rite Aid store. Later, Rapaport returned to the same store only to learn it was closing because of increased thefts.

Actor Michael Rappaport has documented shoplifting at his local Rite Aide. His latest update shows empty store shelves at an Upper East Side Rite Aide that is closing, he says, due to shoplifting.

Supermarkets were some of the hardest-hit stores, and Gristedes, one of the largest grocery store chains in the city with 28 locations citywide, announced that they were beefing up their security in hopes of cracking down on shoplifters.

RELATED: NYC shoplifting on the rise