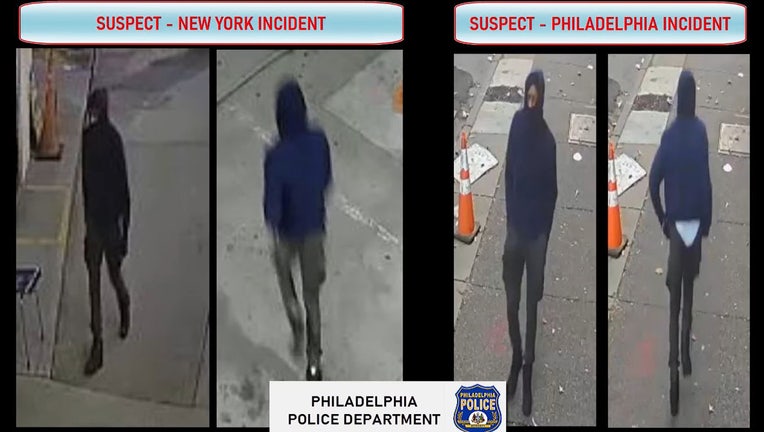 The suspect wanted in connection to a pair of shootings in Philadelphia and New York City.

NEW YORK - The NYPD has announced that the recent shooting of a gas station worker in the Bronx may be linked to the shooting of a Philadelphia Parking Authority Enforcement Officer.

Authorities say that on November 25, an unidentified man wearing a facemask and armed with a silver revolver approached an on-duty Philadelphia Paring Authority officer and shot them once in the head.

Just a few days before, on November 22, police say they believe the same gunman may have shot a Sunoco gas station employee in the head in the Bronx.

The Philadelphia Police Department released surveillance video of both shootings, showing the suspect wearing a similar outfit in both, shooting his victims in the head from point-blank range before running away.

The suspect is described as a man standing around 5'9" tall, with a thin build. He was last seen wearing a navy blue hooded sweatshirt, green cargo pants, a black mask, gloves, and black boots.

Police say the suspect should be considered armed and dangerous.

The City of Philadelphia and The Philadelphia Parking Authority have each offered a $10,000 for a $20,000 total reward for information leading to the suspect's arrest and conviction.

The public can also submit their tips by logging onto the CrimeStoppers website at https://crimestoppers.nypdonline.org/or on Twitter @NYPDTips.