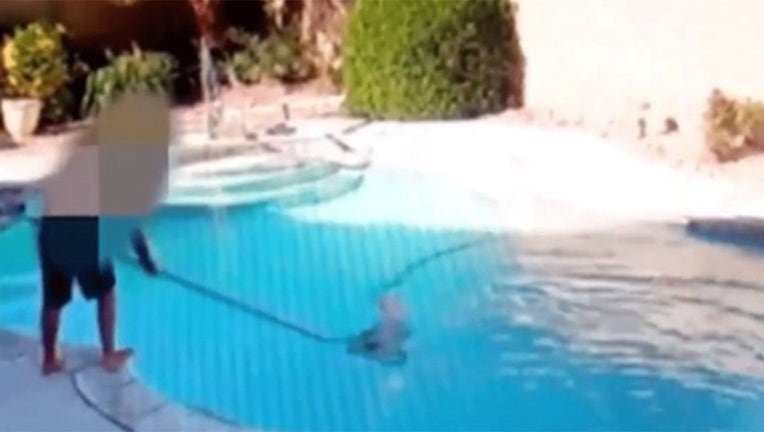 Shocking video posted on Facebook shows a young boy attempting to drown a small dog in a backyard pool in Victorville, California.

VICTORVILLE, Calif. - Shocking video posted on Facebook shows a young boy attempting to drown a small dog in a backyard pool in Victorville.

The dog's owners are furious. They say they went out of town and hired a woman to house sit and watch their dog.

That woman brought her 8-year-old grandson along. When the couple returned home and reviewed their security footage, they were appalled.

The video show's the housesitter's grandson placing the 9-year-old dog named Brandy into the pool.

He then picks up a pool net and starts holding the dog in the deep end of the pool, not allowing it to swim to the steps, and then uses the net to push the dog underwater and hold it there, unable to breathe.

You can see the dog struggling to keep its head above water desperately trying to swim over to the steps for safety, and again, the boy brings Brandy back with the net and underwater.

This vile act goes on for several minutes before the grandmother finally takes Brandy out of the pool -- tired, but alive.

Brandy's owners say they tried contacting the grandmother but couldn't get ahold of her. They also contacted the San Bernardino County Sheriff's Department to report the incident.

They say that deputies did go out and talk to the grandmother and the boy but it's unclear what came of that.

FOX 11 reached out to the Sheriff's Department for information and is waiting to hear back.