A Brazilian baby boy was born with a real human tail that was successfully removed without complications at Albert Sabin Children’s Hospital in the city of Fortaleza, according to the Journal of Pediatric Surgery Case Reports.

The case report described his mother as previously healthy who did not drink alcohol or use illicit drugs, but smoked 10 cigarettes per day during her pregnancy, with one urinary tract infection during her first trimester, which was treated with antibiotics.

She delivered her baby prematurely at 35 weeks with an uncomplicated vaginal delivery, but initial assessment revealed the neonate was jaundiced with a human tail with a ball at the end of it, per the report.

Only approximately 40 cases of real human tails have ever been reported in the literature, according to the authors.

Around the fourth week of gestation, most of us start to grow a tail while in the womb, but it usually disappears by the eighth week, eventually morphing into the tailbone, otherwise known as the coccyx, according to the article.

Because our nervous system and skin derive from a common embryonical origin, an ultrasound examination was performed to rule out any neurological involvement.

After the ultrasound was negative for any nervous system involvement, the baby was taken to the operating room and had a successful surgery to remove it, the report noted.

The article classifies human tails are true or pseudo-tails. 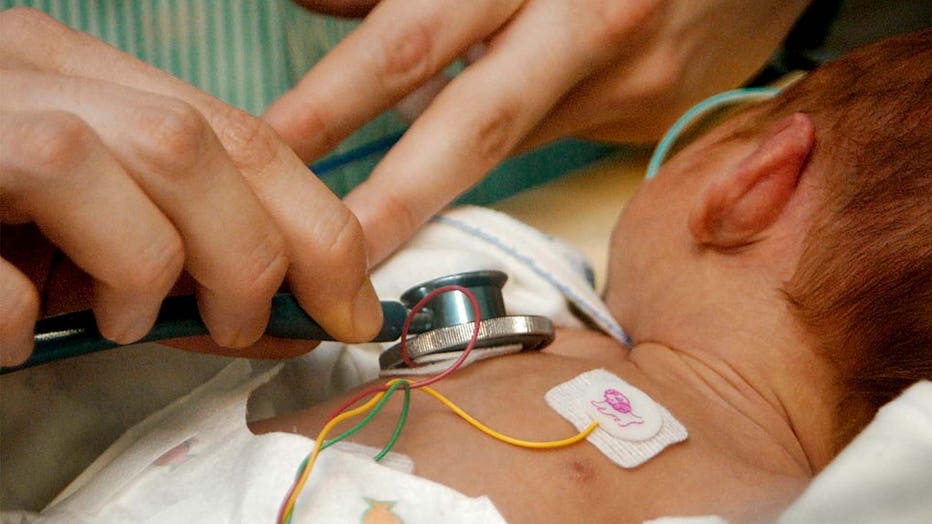 FILE - Examination by a pediatrician.

A true human tail, "represent the persistence of a remnant of the embryonic tail formed between the fourth and eighth week of gestation, being composed of adipose and connective tissue, blood vessels, muscle and nerve fibers."

In contrast, "Pseudo-tails are protuberances basically composed of adipose or cartilaginous tissue and the presence of bone elements."

Sometimes when parents think their baby is born with a real tail, it’s actually a pseudo-tail, which is usually a symptom of a tailbone abnormality or spina bifida, according to a report.

It is thought our ancestors originally had some form of a tail, but we evolved as a species over time without the need for the organ, so we no longer grow them.

Click here to learn more about birth defects from the Centers for Disease Control and Prevention.