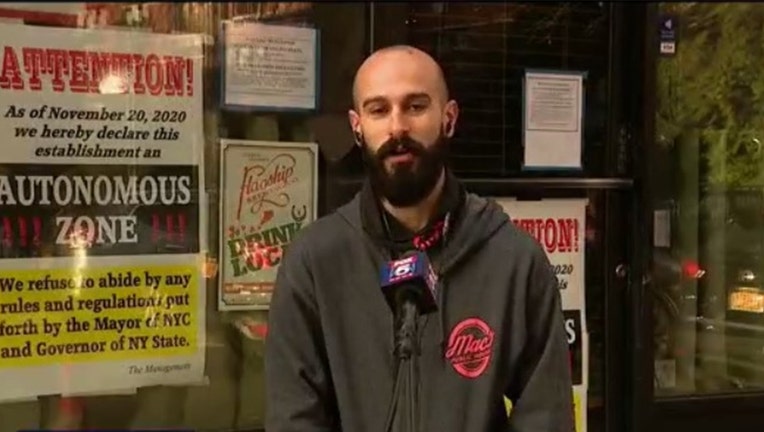 Mac's Public House co-owner Danny Presti is seen outside of the bar. (FOX5NY)

NEW YORK - The co-owner of a New York City bar that authorities said has been defying coronavirus restrictions was taken into custody early Sunday after running over a deputy with a car, authorities said.

Danny Presti tried to drive away from his bar, Mac's Public House, as deputies were arresting him for serving patrons in violation of city and state closure orders, Sheriff Joseph Fucito said.

Deputies attempted to arrest Presti as he left the bar early Sunday, but Presti got into his car, struck a deputy and kept driving for about 100 yards as the deputy was left hanging onto the hood, Fucito said.

Presti, 34, was eventually stopped and apprehended, the sheriff said. Charges against him were pending.

Mark Fonte, an attorney for Presti, said he had not yet had an opportunity to speak to his client. Fonte said he expected Presti to be arraigned later Sunday.

The injured deputy was taken to a hospital for treatment of injuries. The deputy's condition wasn't immediately available.

The Staten Island bar was the site of protests last week after the sheriff's office arrested Presti on charges of violating restrictions aimed at halting the spread of the coronavirus and obstructing governmental administration.

The tavern is in an area designated by Gov. Andrew Cuomo as an orange zone because of spiking COVID-19 rates and was not supposed to be serving customers indoors. But the owners had declared the bar an “autonomous zone,” a nod to protesters who claimed control over a Seattle neighborhood in June.

A Staten Island bar refused to abide by coronavirus rules put in place as cases were rising.

A spokesperson for Mayor Bill de Blasio said Presti's actions showed a disregard for human life. “In both of these instances, whether it’s flouting public health laws or ramming a car into a uniformed deputy, this individual has endangered the lives of others,” said the spokesperson, Bill Neidhardt.

Authorities said the bar was still serving patrons Saturday night even though it was ordered closed entirely after Presti's earlier arrest.

Deputies surveilling the pub saw that the front door to the bar was locked but customers were being directed to a building next door, Fucito said. From there, they were able to enter Mac's Public House through a back door and order food and beverages, he said.

Staten Island is much more conservative than the rest of New York City and is the only one of the city's five boroughs that voted for Republican President Donald Trump in November. The borough is home to many police officers and firefighters and is usually seen as supportive of law enforcement.