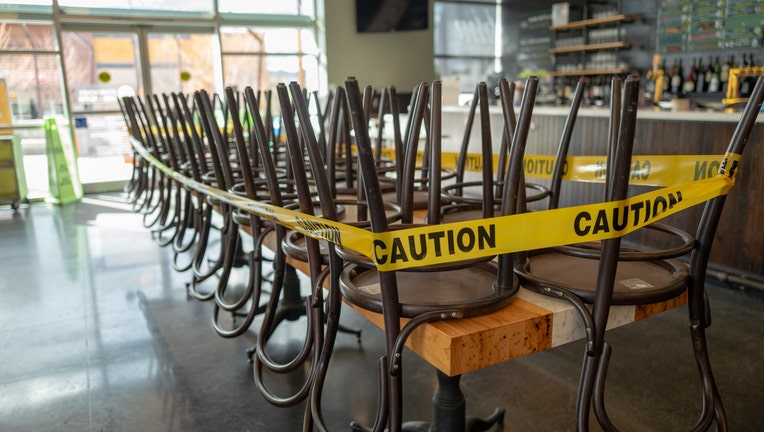 FILE - Chairs are wrapped in caution tape at a restaurant in Dublin, California following shelter in place orders in the San Francisco Bay Area during an outbreak of the COVID-19 coronavirus, March 16, 2020.

WASHINGTON - For years, personal trainer Amanda Tikalsky didn’t have to worry much about her job. The U.S. economy’s record-breaking 11-year expansion offered security to service workers like her.

Then came the coronavirus, which closed the Milwaukee athletic club where she worked for 15 years. She scrambled to organize online exercise sessions to keep money coming in. About 25% of her clients made the jump with her.

"It’s an adjustment for everybody,’’ she said. “We are used to being face to face."

But even when the virus threat is gone, Tikalsky predicts that many customers will continue to exercise from home. The shutdown is also likely to change her own shopping habits. She has a new appreciation for the ease of buying groceries online.

The pandemic is almost sure to leave a mark on the way people work, shop and socialize, perhaps permanently shifting the way many service industries operate. Consumers will think harder about the health implications of squeezing into crowded restaurants and movie theaters. More businesses will accept the effectiveness of employees who work from home, and the move to online shopping will accelerate.

Until March, service workers — from dishwashers to real estate agents — had been enjoying a record winning streak in the job market. U.S. service jobs had risen for a decade.

The sector appeared almost immune to blips in the economy. Not even low-wage competition overseas or automation seemed to threaten service jobs that require direct contact with customers.

Then the virus arrived. It upended the service economy, which accounts for 84% of U.S. private-sector employment. It wiped out 659,000 service jobs in March — 94% of the jobs that vanished last month as the U.S. economy plunged into recession.

It is sure to claim many more. In an interview Monday on CNBC, former Fed Chair Janet Yellen predicted that unemployment rates could climb to Great Depression levels. But because the economy was in solid shape before the outbreak, she added, the return to normal employment could happen much faster than during the Depression or after the 2007-2009 Great Recession.

When the economy goes into a nosedive, manufacturers, not services providers, are usually hit first and hardest.

Not this time. The virus has been a gut punch to businesses that depend on social gatherings — restaurants, cinemas, theaters, hotels, airlines, gyms, shopping centers. More than 250,000 stores are now temporarily closed, accounting for nearly 60% of retail square footage, according to Neil Saunders, managing director of GlobalData Retail, a research firm.

The situation is similar in many other countries. In Wuhan, China, where the viral outbreak began, consumers are still reluctant to go out shopping as conditions slowly head back to normal.

Josh Rivas is among the millions of job casualties in the U.S. He works at a Subway at a rest stop in Connecticut where he and co-workers were laid off because of the virus amid dwindling traffic at the plaza. “We can’t afford for us to miss a day of pay because we have families that we need to take care of and bills we need to pay," he said.

In recessions, factories are often the first to slash jobs, and they don't always bring them back. American manufacturers still employ 918,000 fewer workers than they did before the Great Recession. Over the same period, service employment is up by nearly 14 million.

Economists are divided over whether service employees will face the kind of economic disruption factory workers have endured.

Much depends on the rescue efforts being put together by the U.S. government and the Federal Reserve. Congress and the White House are throwing at least $2.2 trillion at American businesses and households in a desperate attempt to keep them from going under before the health crisis is over.

Shierholz does not expect a “transformative’’ change to service sector jobs.

Still, some effects of the outbreak are likely to linger, analysts say.

Cooped up in their homes, Americans have discovered anew the convenience of shopping online — something that is likely to accelerate the decline of traditional retail stores, said Diane Swonk, chief economist at the accounting and consulting firm Grant Thornton.

Restaurants have closed their dining rooms and reduced service to takeout, delivery and curbside pickup. Swonk expects the trend toward grab-and-go dining to continue after the health crisis.

Restaurant consultant Gordon predicts that local governments will reduce restaurant seating capacity to keep diners from being on top of each other. “Some of the places we used to go were just armpit to armpit. Can you see us doing that now?’’ he said.

Millions of Americans have spent weeks working from home, and the experience has been eye-opening for many, and for their bosses. Meetings and even virtual after-hours cocktail parties can be organized on Zoom, WhatsApp or other programs.

“We’re just discovering that we can have amazing seminars and conferences online much easier. We don’t have to travel anywhere," said Arindrajit Dube, economist at the University of Massachusetts, Amherst. That's troubling for airlines and hotels that depend on business travel, sometimes to subsidize discounts for leisure travelers.

The enhanced appeal of home offices could also have implications for real estate markets, giving more workers expanded housing options because they won’t need to travel to their jobs.

But there may be limits to Americans’ enthusiasm for isolating themselves at home.

Becky Ahlgren Bedics, 49, of Fishers, Indiana, has been working out via Zoom since her fitness club closed temporarily in mid-March. But she plans to trek over to the club when it reopens. She misses the camaraderie. “There’s such a connection that you have with people,” she added.