A gigantic, 20-foot-deep sinkhole opened up on the Upper East Side on Thursday, just days after a different sinkhole swallowed parked cars on the Upper West Side.

NEW YORK - A sinkhole opened up in the middle of a block on the Upper East Side of Manhattan on Thursday morning.

Crews from the Department of Environmental Protection, or DEP, which manages the city's water supply system, responded to investigate and fill the hole on East 89th Street near York Avenue, officials said.

Personnel from utility companies also came to check on any possible damage to their equipment and infrastructure.

Video from the scene shows a backhoe excavating dirt from the sinkhole and a number of people working in and around the collapsed roadway.

DEP crews worked to fix the problem that caused the roadway to collapse on East 89th Street near York Avenue on Thursday.

A few hours after the hole opened, a DEP spokesperson said the investigation was "ongoing" and that two buildings on 89th Street — No. 504 and No. 506 — were without water service.

"Excavation is being enlarged to examine underground infrastructure in the area," the spokesperson said.

Sinkhole on Upper East Side

The NYC Department of Environmental Protection is investigating the cause of a large sinkhole on the Upper East Side.

The street closure was causing some traffic problems in the area.

"Due to a sinkhole, expect extensive traffic delays in the area of East 89th Street and York Avenue in Manhattan," Notify NYC said in an email alert. "Consider alternate routes and allow for additional travel time." 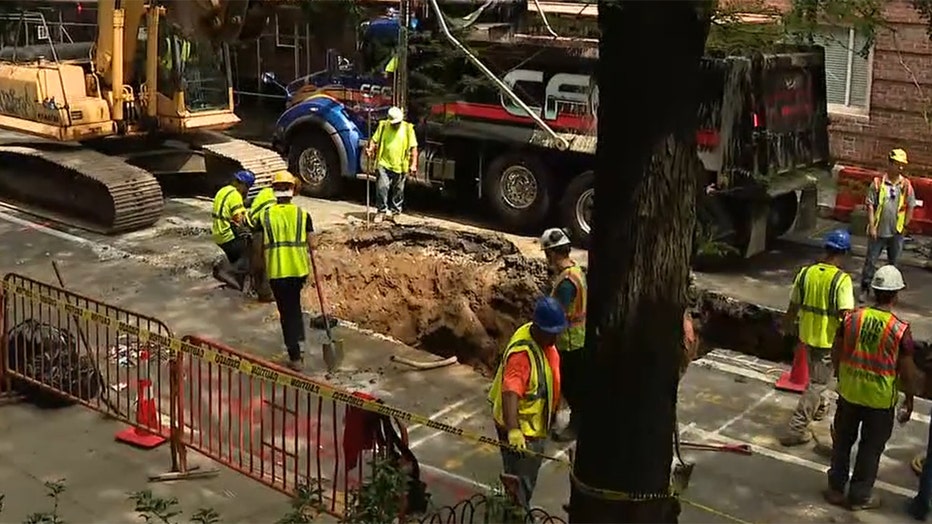 Roadway cave-ins are down more than 25% so far this year compared to the same time last year, according to the Mayor's Management Report.

Crews worked to repair a street on the Upper East Side the surface caved in.