In this Nov. 4, 2019, still image from video, sculptor Meredith Bergmann works on the first women's statue that will be installed in New York's Central Park, in her studio in Ridgefield, Conn. The monument is scheduled to be dedicated Aug. 26, 2020,

RIDGEFIELD, Conn. - A sculptor known for trying to redress history through her art is creating the first statue of real-life women for New York’s Central Park, where the only females so honored until now have been fictional characters.

Meredith Bergmann’s vision for the sculpture, chosen from 91 submissions, features three women’s rights pioneers — Susan B. Anthony, Elizabeth Cady Stanton and Sojourner Truth. While honoring their specific efforts on behalf of women’s suffrage, women’s civil rights and the abolition of slavery, Bergmann hopes her latest work will also make a statement about the need to recognize the contributions of women.

“This monument has a very focused message,” she said in an interview at her studio in Ridgefield, Connecticut. “The fact of the monument itself, that it exists at all, that it will be where it is, is the message.”

Of the 23 statues of historical figures in the 840-acre, 166-year-old public park, none honors actual women. There are statues of three female fictional characters: Alice in Wonderland, Mother Goose and William Shakespeare’s Juliet, who appears with Romeo.

There had been a moratorium on erecting any new statues in Central Park. But in 2014, a volunteer, nonprofit group called Monumental Women, made up of women’s rights advocates, historians and community leaders, set out to break what they’ve called the “bronze ceiling” and develop a statue depicting real women. With the help of the Girl Scouts, private foundations and others, they raised $1.5 million in private funding for the 14-foot-tall monument, to be located on the park’s famed Literary Walk. It’s scheduled to be unveiled on Aug. 26, 2020, marking the 100th anniversary of the 19th Amendment to the U.S. Constitution, which enshrined the right for women to vote.

“It’s fitting that the first statue of real women in Central Park depicts three New York women who dedicated their lives to fighting for women’s rights,” said Pam Elam, president of Monumental Women, in a written statement last month after the project received approval from a city commission. “This statue conveys the power of women working together to bring about revolutionary change in our society. It invites people to reflect not just on these women and their work for equality and justice, but on all the monumental women who came before us.” 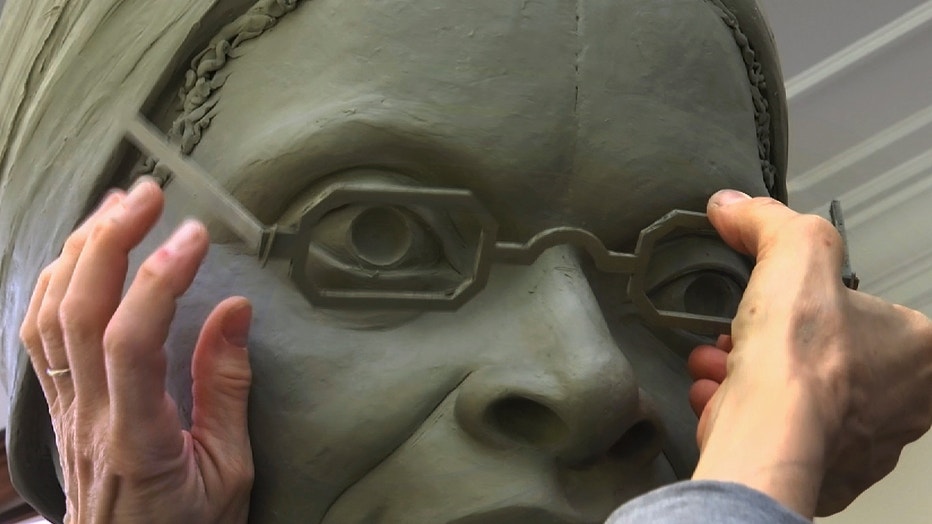 In this Nov. 4, 2019, still image from video, sculptor Meredith Bergmann works on the first women's statue that will be installed in New York's Central Park, in her studio in Ridgefield, Conn. The monument is scheduled to be dedicated Aug. 26, 2020,

Midway into the massive and multi-faceted project, Bergmann and her assistants have nearly finished sculpting from foam and clay an imagined scene of the three women having a conversation at a table. Truth is speaking, Anthony is organizing and Stanton is writing, which Bergman describes as the three essential elements of activism.

The current design is the result of a long process that involved various changes, including the late addition of Sojourner Truth, an African-American abolitionist and women’s rights activist who was born into slavery but escaped to freedom in 1826. It originally included Anthony, a writer, lecturer and abolitionist who fought for the rights of women to vote and own property; Stanton, another leading figure in the women’s voting rights movement, and an abolitionist and author; and a scroll with a list of 17 other women involved in the women’s movement from 1848 to 1920.

Bergmann dove deeply into the worlds and histories of all three women and their senses of mission, similar to what the artist has done with her other works of public art. One such work, the Boston Women’s Memorial, features statues portraying Abigail Adams, the wife and mother of two U.S. presidents and a women’s rights advocate; abolitionist and suffragist Lucy Stone; and Phillis Wheatley, a former slave who became a literary prodigy.

Meanwhile, work is nearly complete for the FDR Hope Memorial on Roosevelt Island in Manhattan, which features two statues Bergmann created of the late President Franklin D. Roosevelt in a wheelchair and a young girl with crutches, greeting one another. The memorial is supposed to be an inspiration to people struggling with all forms of disability, in a location once called Welfare Island — a stretch of land with a long past that included a prison and a smallpox hospital.

For the Central Park project, Bergmann studied every photo and description she could find, taking great pains, for example, to reflect a “hint of a smile” on the face of Truth, known to have a good sense of humor. While the three activists are not depicted in the monument at any known meeting, Bergmann said it’s plausible they could have met together. She noted how Anthony and Stanton, who worked together and formed the National Woman Suffrage Association, would have known Truth through abolition and women’s rights circles, and how Truth was a guest at Stanton’s home in the 1860s. Stanton’s daughter would read newspapers aloud to Truth, who was illiterate. 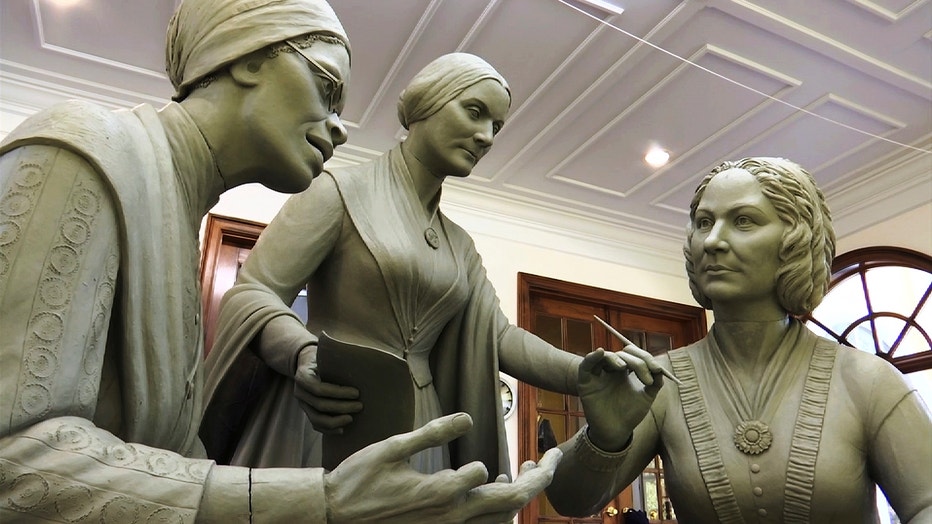 This Nov. 4, 2019, still image from video shows a portion of the first women's statue that will be installed in New York's Central Park, as it is being created by sculptor Meredith Bergmann in her studio in Ridgefield, Conn. The monument is scheduled

Such a gesture, Bergmann said, “just seemed to express the idea of women’s cooperation,” a message the artist has tried to invoke in the sculpture.

Bergmann has also focused on other fine details, such as the women’s clothing. She noted that all three “used their outfits to calm people, to show that they were not threatening propriety, but also that they were women who valued themselves.”

Once the sculpting work is done, likely in the coming weeks, Bergmann said molds will be taken and they will eventually be cast in bronze at a foundry in New York. Detailed work will need to be performed, such as making sure the women’s heads are at the right tilt and the ends of the granite base are curved perfectly.

It has become a labor of love for Bergmann, albeit a challenging one.

“I haven’t had a project on this scale, with this ferocious of a deadline. And it is, it is nerve-wracking. And I’m working harder than I’ve ever worked,” said Bergmann. “All summer, all fall, this is what I’m doing. And it’s thrilling.”