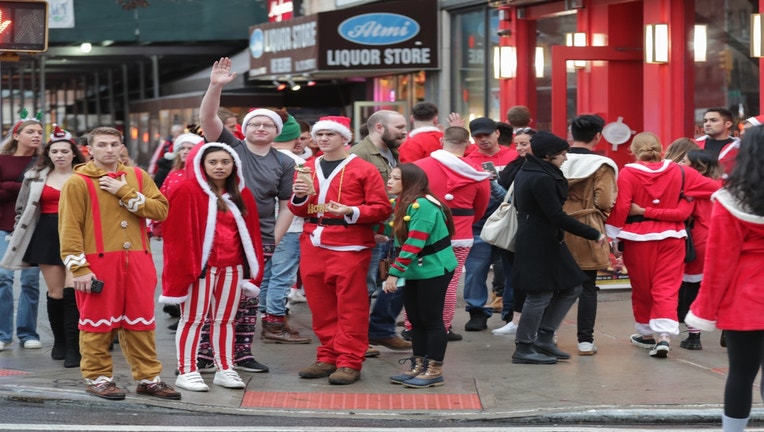 Thousands of people gathered on the streets of New York City, New York, many in costumes, for Santacon, an annual Christmas themed pub crawl, December 14, 2019. (Photo by EuropaNewswire/Gado/Getty Images)

NEW YORK - The 2020 edition of SantaCon NYC has been canceled by its organizers due to the coronavirus pandemic.

"All of the reindeer got the ‘Rona so, the Elves have advised Santa to hold off on the in-person merriment. There is no SantaCon NYC this year," a statement on the SantaCon NYC website said.

Instead, organizers directed people to donate to Helping Hearts NYC, a charity devoted to providing food to some of the city's most at-risk groups during the pandemic.

SantaCon has come under fire in previous years for its attendees' boozy antics, with an online campaign last year to get the event canceled altogether.

Is it time to cancel SantaCon?

It’s that time of year again, when thousands of people dressed up as St. Nick fill the streets of New York City for SantaCon. However, an online campaign has been launched to cancel the event, whose participants can be more naughty than nice.