The election that will pick the next mayor of New York City is more than a year away. But the field of presumed and declared candidates is growing. Comptroller Scott Stringer announced he is running. And Sanitation Commissioner Kathryn Garcia said she is resigning her post as she considered tossing her hat in the ring, too.

When asked during his coronavirus briefing about the resignation, de Blasio said he wished her and two other former members of his administration who are also seeking to replace him in 2021 'great luck.'

Garcia, 50, a Park Slope native has a reputation in City Hall for being de Blasio's go-to problem solver.

"Kathryn has done a great job for this city," said de Blasio. "I really appreciate all she did not just as Sanitation Commissioner-- many highlights there--I'm particularly proud of the fact that on our watch--wish we didn't deal with the largest blizzard in New York City's history-- but we did, Kathryn and her team did a great job getting the city right up and running quickly. The extraordinary work she's done on the path to eradicate lead paint and the poisoning of this city once and for all. She's done great work with the housing authority and more recently to make sure every New Yorker get food."

Mayor Bill de Blasio says he is proud of the work Kathryn Garcia has done as Sanitation Commissioenr.

Garcia's resignation will be effective later this month, reported the NY Times. Her last day will be September 18.

"She is one of three, very talented, effective leaders from my administration who have now chosen to run for mayor or explore a run for the mayoralty. Maya Wiley, Loree Sutton all extraordinary talented leaders. I'm proud of all of them and what they have achieved in this administration. Three strong women. I think that's great for New York City. I wish them all great luck," said de Blasio.

"She is one of three, very talented, effective leaders from my administration who have now chosen to run for mayor or explore a run for the mayoralty. Kathryn,  Maya Wiley, Loree Sutton all extraordinarily talented leaders. I'm proud of all of them and what they have achieved in this administration. Three strong women. I think that's great for New York City. I wish them all great luck."

Garcia's resignation comes as the city deals with trash piling up due to budget cuts during the city's battle against the coronavirus.

"This is a point in time where the Sanitation Department doesn’t have the resources that it once did,"  said Garcia earlier this month. "So we are trying to leverage whatever we can to make sure we are keeping the city as clean as we can. "

The economic fallout from the pandemic resulted in a $25 million cut from the Sanitation Department's budget in July. That meant a 60% reduction in pickups of public trash baskets. So if the baskets were being emptied every day pre-pandemic, now that may happen only three times a week. 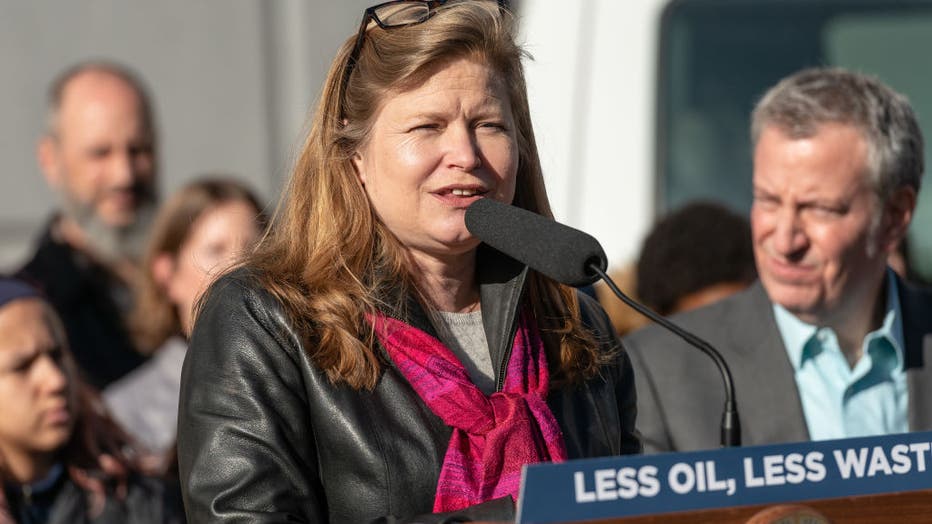