Millions of people have flocked to Barry Enderwick’s TikTok page to see what kinds of sandwiches people were eating hundreds of years ago.

LOS ANGELES - Would you ever try an oyster sandwich? How about a mustard sandwich with butter on rye bread? While they might not be the first thing you think of when you walk into your local bodega, these were quite popular in a bygone era.

While there are many ancient sandwich recipes that have been lost to time, one TikTok influencer is dusting off old historical cookbooks to bring whatever people from the last century thought was acceptable to put between two slices of bread and showcasing it for today’s younger, hipper audience.

Meet Barry Enderwick, who works as a marketing director in California for his day job, and uses that marketing skill in true "Mad Men" fashion to hopefully get people interested in absurd but once popular recipes from the 1700s to the early 1900s.

While he’s not always successful at re-branding things like the mashed anchovy sandwich, his reviews have amassed 3.2 million likes.

"We should have named this sandwich ‘harsh reality,’" Enderwick quipped in a video reviewing the infamous anchovy sandwich.

That may have looked gross, but his following shows Enderwick isn’t here to chase anyone off.

Enderwick says he’s been called the "Bob Ross of sandwiches." His voice is calm and usually creates a happy spin on even the most controversial sandwich recipes.

A prime example of Enderwick’s work is the French "pan bagnat," which he has ranked as one of his favorites. The sandwich requires two days of work. He starts off by creating a vinaigrette dressing to which he adds red onions, tomatoes olives, cucumber, thinly sliced radishes and arugula. He adds that mixture to a baguette with slices of hard-boiled egg, and an anchovy filet, wrapped tightly in plastic and chilled in the fridge weighed down overnight.

"Man! How come I’ve never made this before," Enderwick exclaimed as he rated the dish a 10/10.

It’s content like that which highlights the craft that goes into the videos Enderwick makes. He isn’t just a guy on the internet eating sandwiches in front of a camera. He’s bringing his audience on a journey through the essence of what is most likely the magnum opus of human cuisine.

Albeit, Enderwick typically only makes half of the sandwiches he picks out of the cookbooks because he says he "doesn’t like to waste food because some of those sandwiches aren’t good."

Much more than just two slices of bread

Despite some polarizing recipes, the majority of the reactions to Enderwick’s content has been praise and even pride whenever he showcases a historical sandwich from a particular culture, like the Cuban sandwich.

"People from those countries see it and get very excited to see their country represented," Enderwick said. "I try to be very respectful of the language, of the history, the context of the culture because I’m not here to mock anyone, I’m here to try these sandwiches out and the international ones are well known for a reason."

When you have a dish that millions of people hold so close to their heart with so much pride for something — perhaps their grandparents or parents have been making for them since they were a child — there will always be clashing opinions.

"I just did the Cuban sandwich and sure enough, I didn’t have access to Cuban water bread and didn’t have time to make it so I used a ciabatta roll and I’ve heard from someone who says ‘I’m Cuban and that’s perfectly fine!’ to ‘it’s not a Cuban sandwich if you’re not using Cuban bread!’ but I don’t mind the comments like that because it just shows they’re passionate about sandwiches," Enderwick explained.

Enderwick regarded Cuban sandwich lovers as some of the most renowned sandwich gatekeepers, and for good reason. Sandwiches mean a lot to people.

"Every sandwich, including the Kentucky hot brown, the Cuban sandwich, the Bahn mi, everyone is fierce about how they experience it, which is great, I’ll hear about different variations that I’ve not heard of before," he offered. 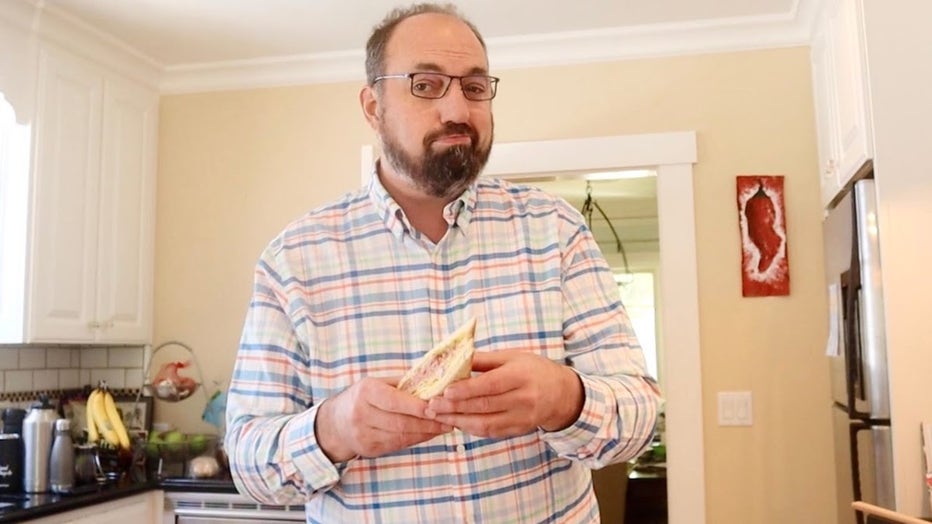 Meet Barry Enderwick, who works as a marketing director in California for his day job, and uses that marketing skill in true “Mad Men” fashion to hopefully get people interested in absurd but once popular recipes from the 1700s to the early 1900s.

Proustian madeleine is an expression coined by the famous novelist Marcel Proust, who wrote in his most well-known novel "Swann's Way," published in 1913 about madeleine tea cakes. The smell and taste of the cakes would overwhelm him with emotion bringing him back to the days of his childhood when his mother would give him the same snack evoking happy and wholesome memories of his past.

Over time, the expression became a popular way to explain when something like food or even a place brings forth memories associated with that very thing.

This is the exact impact that sandwiches seem to have on most people, according to Enderwick. He grew up eating a fried bologna sandwich. A simple dish he grew up eating that he still loves to this day.

That is the appeal that has brought millions to Enderwick’s channel. Millions of people, whether they realize or not, have an interest in connecting with their past through the magic of cooking.

Enderwick says mass appeal for the dish can mainly be seen in its practicality.