Police in Columbia, S.C. released a video of 21-year-old Samantha Josephson getting into a car she mistook for her Uber ride before her 2019 death. (Source: Handout/WACH via FOX Edge)

COLUMBIA, S.C. (AP) - The South Carolina man accused of killing the woman who mistook his car for her Uber ride trapped her in the vehicle hours before her body, riddled with stab wounds, was dumped near his family home, prosecutors argued in court Tuesday.

Nathaniel Rowland is on trial for the kidnapping and murder of 21-year-old Samantha Josephson. The University of South Carolina student from Robbinsville, New Jersey, disappeared from Columbia’s Five Points entertainment district one night in March 2019. It was the spring before she was set to graduate and head to law school.

In opening arguments in Richland County Judicial Center in Columbia, prosecutors previewed evidence and testimony they said would implicate Rowland. That included surveillance camera footage of Josephson entering Rowland's car as well as a witness who the prosecutors say allegedly watched Rowland clean the blade he used to repeatedly stab Josephson.

Fifth Circuit Solicitor Byron Gipson said cameras in the entertainment district captured Rowland circling the block multiple times in his black Chevrolet Impala before pulling up to Josephson, who was waiting alone. Josephson got into the car, and it was the last time she was seen alive, the prosecutor said.

"As she stood there waiting for that Uber, he had his eyes firmly transfixed on her," Gipson said.

Once inside, Josephson was trapped because Rowland had turned on the backseat child locks so the doors could only be opened from the outside, prosecutors said.

Josephson’s death drew national attention to safety concerns about ride-hailing services and prompted some changes. South Carolina lawmakers enacted a measure that requires drivers to make license plate numbers visible in the front of their vehicles and creates criminal penalties for people who impersonate ride-hailing drivers.

Rowland, who has pleaded not guilty to the charges, has been in the Richland County jail since his arrest a day after Josephson's disappearance. He could face up to life in prison if convicted of murder. 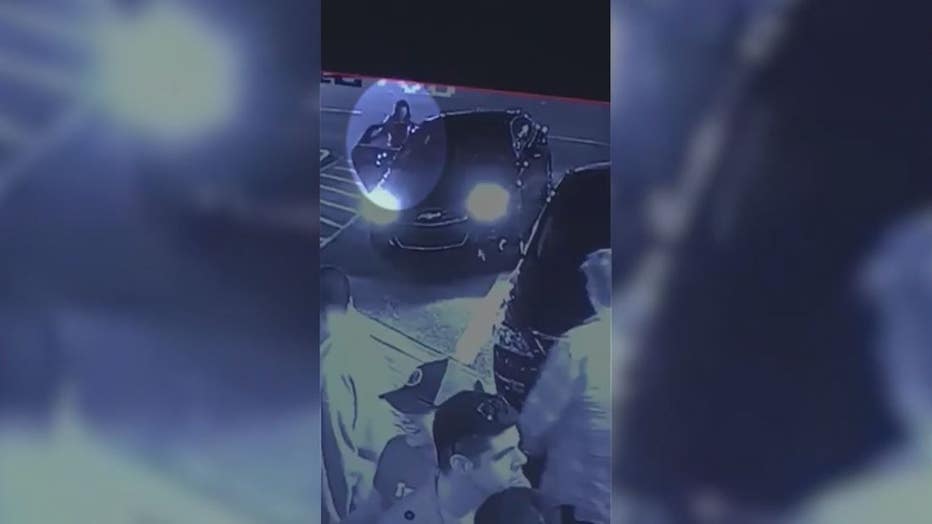 Police in Columbia, S.C. released a video of 21-year-old Samantha Josephson getting into a car she mistook for her Uber ride before her 2019 death. (Source: Handout/WACH via FOX Edge)

Gipson said more than 100 stab wounds, cuts and other abrasions were found on Josephson's body, which was dumped in woods about 65 miles (105 kilometers) from Columbia.

It was clear Josephson fought back, "kicking and punching and clawing the person attacking her," said Alicia Goode, one of Rowland's public defenders.

Goode noted that investigators had amassed a large amount of evidence in the days after the crime, including swabbing Josephson's body and Rowland's car.

Yet none of the DNA evidence gathered from the victim matches Rowland, Goode said.

"Zero: that's the amount of DNA on Samantha Josephson’s body that matches Nathaniel's," Goode said. "Zero. It’s not on her clothing, not under her ripped and torn fingernails, it’s not on her ankles."

Gipson said investigators tracking both Josephson's and Rowland's phones found the the two traveling together through parts of Columbia for about 20 minutes before Josephson’s phone "mysteriously powered off."

Rowland’s phone continued to ping all the way to the small community of New Zion, South Carolina — the location of both Rowland's hometown and the woods where Josephson's body was dumped a short distance from Rowland's family home, the prosecutor pointed out.

Gipson also said there were witnesses who found Rowland's bloody clothes in a dumpster and saw Rowland cleaning the "peculiar looking knife blade tool" that prosecutors said had served as the murder weapon.

Gipson, who didn’t address any potential motives for the crime, discussed video evidence showing Rowland attempting to use the victim's debit card and trying to sell her cellphone. Investigators later found Josephson's blood and cellphone in Rowland’s car, along with bleach, window cleaner and cleaning wipes.

Liu is a corps member for the Associated Press/Report for America Statehouse News Initiative. Report for America is a nonprofit national service program that places journalists in local newsrooms to report on undercovered issues.