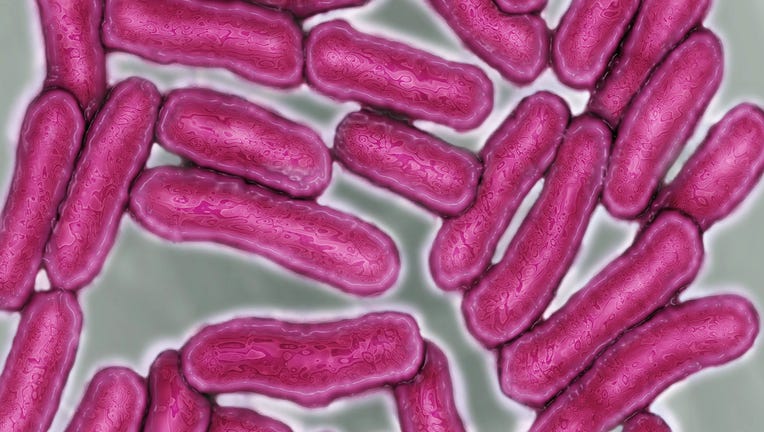 NEW YORK - The Centers for Disease Control and Prevention (CDC) warned Friday that an outbreak of salmonella due to an "unknown food source" has been detected in 25 states across the U.S.

The agency said that on Sept. 2, it identified an outbreak of 20 salmonella oranienburg infections and that, since then, "the outbreak has grown rapidly."

A map shows where people in this Salmonella outbreak were found.

As of last Wednesday, 127 people were infected with the outbreak strain and reported illnesses started on dates ranging from Aug. 3, 2021, to Sept. 1, 2021.

People less than a year old to 82 years old have been infected.

Of 49 people with available information, the CDC wrote that 18 have been hospitalized and no deaths have been reported.

"The true number of sick people in an outbreak is likely much higher than the number reported, and the outbreak may not be limited to the states with known illnesses. This is because many people recover without medical care and are not tested for Salmonella," it said. "In addition, recent illnesses may not yet be reported as it usually takes 3 to 4 weeks to determine if a sick person is part of an outbreak."

In order to work out the source of the outbreak, state and local health officials are interviewing the sick regarding foods they ate in the week prior to infection.

The CDC noted that several groups of people who ate at the same restaurant and got sick have been identified, which could aid in the effort. The Food and Drug Administration (FDA) is analyzing records collected from the restaurant locations.

As the investigation continues, public health officials are using the PulseNet system – which manages a national database of DNA fingerprints of bacteria that cause foodborne illness – to identify illnesses that could be part of the outbreak.

Additionally, using whole genome sequencing, the CDC found that bacteria from sick people's samples are closely related genetically, meaning that the people affected by the outbreak likely got sick from the same food.

Symptoms of salmonella usually start six hours to six days after infection and most people recover without treatment after four to seven days – though some, including children younger than 5 years old and adults 65 years and older and people with weakened immune systems, may experience more severe illnesses. These symptoms include diarrhea, fever and stomach cramps.

Those who believe they have these symptoms should also report their illness to the health department and assist public health investigators as well as write down what was eaten in the week before they started to get sick.

To prevent salmonella, individuals should wash hands, utensils, surfaces and rinse fruits and vegetables, keep food that won't be cooked separate from raw meat, poultry, and seafood, use a food thermometer and make sure food has been cooked to a temperature high enough to kill germsexternal icon and refrigerate perishable foods within two hours and thaw food in the refrigerator.