Salman Rushdie, the author whose writing led to death threats from Iran in the 1980s, was attacked Friday as he was about to give a lecture in western New York. His condition is unknown at this time.

MAYVILLE, N.Y. (AP) - "The Satanic Verses" author Salman Rushdie was taken off a ventilator and able to talk Saturday, a day after he was stabbed as he prepared to give a lecture in upstate New York.

Rushdie remained hospitalized with serious injuries, but fellow author Aatish Taseer tweeted in the evening that he was "off the ventilator and talking (and joking)." Rushdie’s agent, Andrew Wylie, confirmed that information without offering further details.

Earlier in the day, the man accused of attacking him Friday at the Chautauqua Institution, a nonprofit education and retreat center, pleaded not guilty to attempted murder and assault charges in what a prosecutor called a "preplanned" crime.

An attorney for Hadi Matar entered the plea on his behalf during an arraignment in western New York. The suspect appeared in court wearing a black and white jumpsuit and a white face mask, with his hands cuffed in front of him. 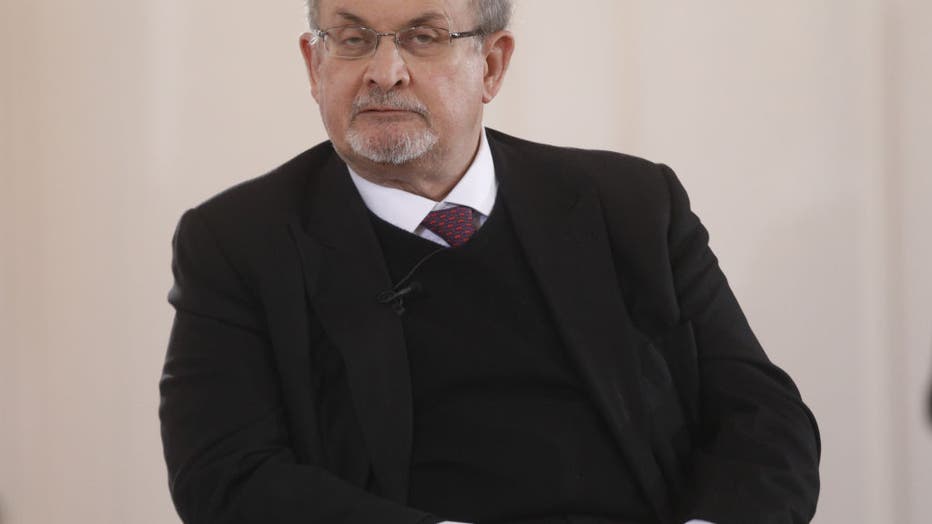 A judge ordered him held without bail after District Attorney Jason Schmidt told her Matar, 24, took steps to purposely put himself in position to harm Rushdie, getting an advance pass to the event where the author was speaking and arriving a day early bearing a fake ID.

"This was a targeted, unprovoked, preplanned attack on Mr. Rushdie," Schmidt said.

Public defender Nathaniel Barone complained that authorities had taken too long to get Matar in front of a judge while leaving him "hooked up to a bench at the state police barracks."

"He has that constitutional right of presumed innocence," Barone added. 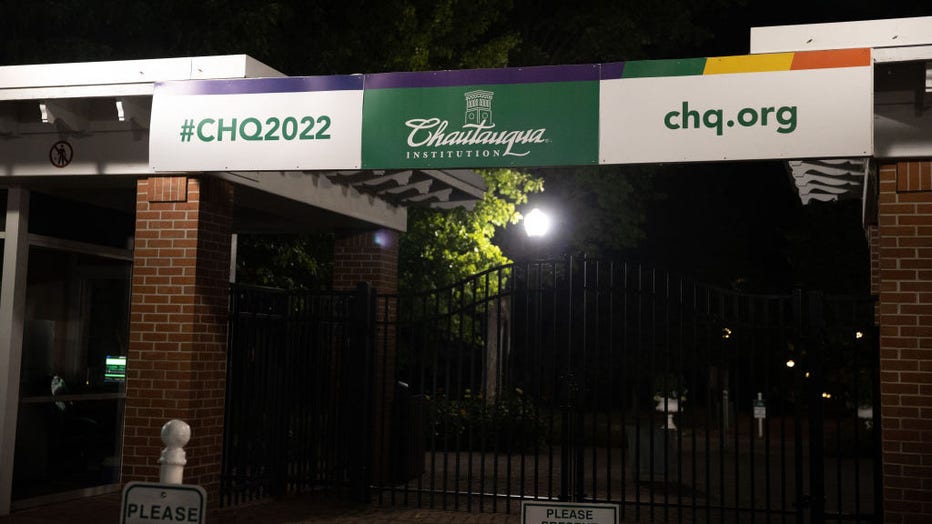 Rushdie, 75, suffered a damaged liver and severed nerves in an arm and an eye, Wylie said Friday evening. He was likely to lose the injured eye.

The attack was met with shock and outrage from much of the world, along with tributes and praise for the award-winning author who for more than 30 years has faced death threats for "The Satanic Verses."

Authors, activists and government officials cited Rushdie’s courage and longtime advocacy of free speech despite the risks to his own safety. Writer and longtime friend Ian McEwan called Rushdie "an inspirational defender of persecuted writers and journalists across the world," and actor-author Kal Penn cited him as a role model "for an entire generation of artists, especially many of us in the South Asian diaspora toward whom he’s shown incredible warmth."

Author Salman Rushdie was airlifted to a hospital after being stabbed on stage before a lecture in New York. Credit: Pilar Pintagro via Storyful

President Joe Biden said Saturday in a statement that he and first lady Jill Biden were "shocked and saddened" by the attack.

"Salman Rushdie — with his insight into humanity, with his unmatched sense for story, with his refusal to be intimidated or silenced — stands for essential, universal ideals," the statement read. "Truth. Courage. Resilience. The ability to share ideas without fear. These are the building blocks of any free and open society."

Rushdie, a native of India who has since lived in Britain and the U.S., is known for his surreal and satirical prose style, beginning with his Booker Prize-winning 1981 novel "Midnight’s Children," in which he sharply criticized India’s then-prime minister, Indira Gandhi.

"The Satanic Verses" drew death threats after it was published in 1988, with many Muslims regarding as blasphemy a dream sequence based on the life of the Prophet Muhammad, among other objections. Rushdie’s book had already been banned and burned in India, Pakistan and elsewhere before Iran’s Grand Ayatollah Ruhollah Khomeini issued a fatwa, or edict, calling for Rushdie’s death in 1989.

Khomeini died that same year, but the fatwa remains in effect. Iran’s current supreme leader, Khamenei, never issued a fatwa of his own withdrawing the edict, though Iran in recent years hasn’t focused on the writer. 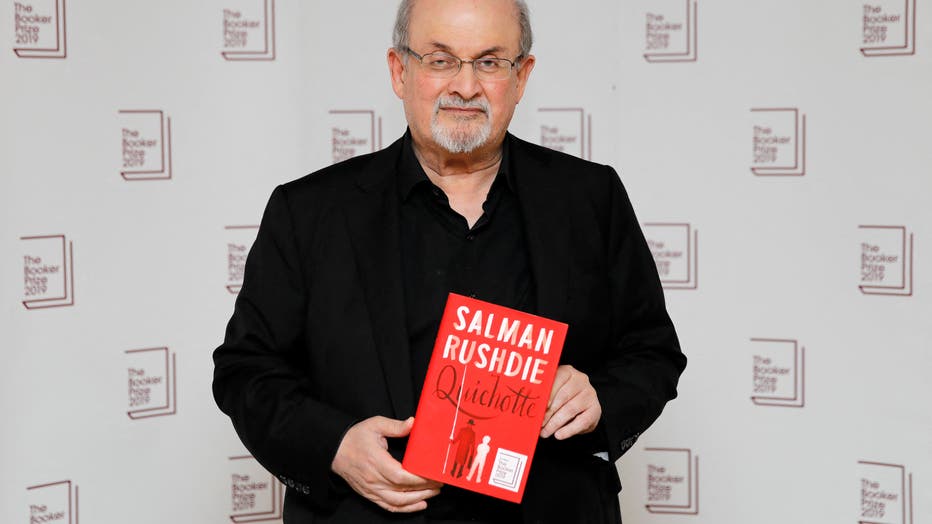 British author Salman Rushdie poses with his book 'Quichotte' during the photo call for the authors shortlisted for the 2019 Booker Prize for Fiction at Southbank Centre in London on October 13, 2019. (Photo by TOLGA AKMEN/AFP via Getty Images)

Investigators were working to determine whether the suspect, born a decade after "The Satanic Verses" was published, acted alone.

District Attorney Schmidt alluded to the fatwa as a potential motive in arguing against bail.

"His resources don’t matter to me. We understand that the agenda that was carried out yesterday is something that was adopted and it’s sanctioned by larger groups and organizations well beyond the jurisdictional borders of Chautauqua County," the prosecutor said.

Barone, the public defender, said after the hearing that Matar has been communicating openly with him and that he would spend the coming weeks trying to learn about his client, including whether he has psychological or addiction issues.

Matar is from Fairview, New Jersey. Rosaria Calabrese, manager of the State of Fitness Boxing Club, a small, tightly knit gym in nearby North Bergen, said Matar joined April 11 and participated in about 27 group sessions for beginners looking to improve their fitness before emailing her several days ago to say he wanted to cancel his membership because "he wouldn’t be coming back for a while."

Gym owner Desmond Boyle said he saw "nothing violent" about Matar, describing him as polite and quiet, yet someone who always looked "tremendously sad." He said Matar resisted attempts by him and others to welcome and engage him.

"He had this look every time he came in. It looked like it was the worst day of his life," Boyle said.

Matar was born in the United States to parents who emigrated from Yaroun in southern Lebanon, the mayor of the village, Ali Tehfe, told The Associated Press.

Flags of the Iran-backed Shia militant group Hezbollah are visible across the village, along with portraits of leader Hassan Nasrallah, Khamenei, Khomeini and slain Iranian Gen. Qassem Soleimani.

Journalists visiting Yaroun on Saturday were asked to leave. Hezbollah spokespeople did not respond to requests for comment.

Iran’s theocratic government and its state-run media assigned no motive for the attack. In Tehran, some Iranians interviewed by the AP praised the attack on an author they believe tarnished the Islamic faith, while others worried it would further isolate their country.

On Friday, on AP reporter witnessed the attacker stab or punch Rushdie about 10 or 15 times.

Event moderator Henry Reese, 73, suffered a facial injury and was treated and released from a hospital, police said. He and Rushdie had planned to discuss the United States as a refuge for writers and other artists in exile.

A state trooper and a county sheriff’s deputy were assigned to Rushdie’s lecture, and police said the trooper made the arrest. But afterward some longtime visitors to the Chautauqua Institution questioned why there wasn’t tighter security given the threats against Rushdie and a bounty of more than $3 million on his head.

On Saturday the center said it was boosting security through measures such as requiring photo IDs to purchase gate passes, which previously could be obtained anonymously. Patrons entering the amphitheater where Rushdie was attacked will also be barred from carrying bags of any type.

The changes, along with an increased presence of armed police officers on the bucolic grounds, came as something of a shock to Chautauquans who have long relished the laid-back atmosphere for which the nearly 150-year-old vacation colony is known.

News about the stabbing has led to renewed interest in "The Satanic Verses," which topped best seller lists after the fatwa was issued in 1989. As of Saturday afternoon, the novel ranked No. 13 on Amazon.com.

The death threats and bounty Rushdie faced over the book after its publication led him to go into hiding under a British government protection program, which included an around-the-clock armed guard. After nine years of seclusion, Rushdie cautiously resumed more public appearances.

In 2012 he published a memoir about the fatwa titled "Joseph Anton," the pseudonym he used while in hiding.

He said during a New York talk that year that terrorism was really the art of fear: "The only way you can defeat it is by deciding not to be afraid."