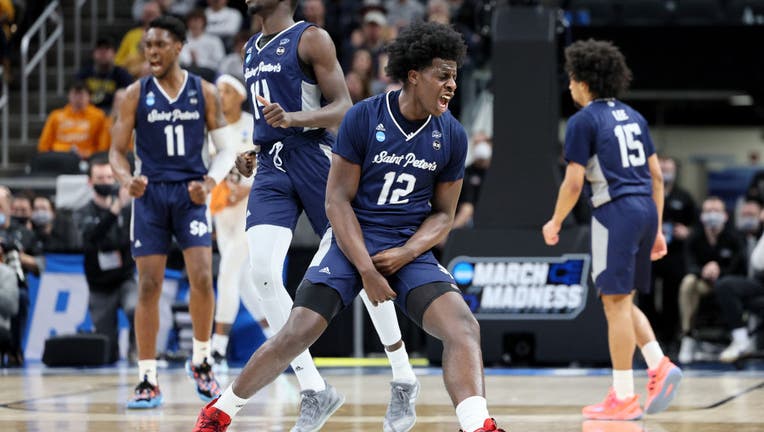 Clarence Rupert #12 of the St. Peter's Peacocks reacts in the second half against the Murray State Racers during the second round of the 2022 NCAA Men's Basketball Tournament at Gainbridge Fieldhouse on March 19, 2022 in Indianapolis, Indiana. (Photo

INDIANAPOLIS - Saint Peter’s broke the hearts of Kentuckians yet again, getting 17 points from KC Ndefo to beat Murray State 70-60 on Saturday night in the second round of the NCAA Tournament and complete its rise from obscurity into the Sweet 16.

The memories will be lifelong for the Peacocks and coach Shaheen Holloway, a North Jersey hoops lifer who played at Seton Hall and apprenticed there as an assistant. On Friday, Pirates coach Kevin Willard endorsed Holloway as his replacement if he departs in the offseason.

Holloway has more immediate concerns: preparing his team for an East Region semifinal on Friday in Philadelphia against Virginia Tech or Purdue.

Doug Edert came off the bench to score 13 points for the Peacocks, including some big baskets late. Saint Peter’s built a 13-point lead early in the second half and never trailed, but Murray State still made it tense. Justice Hill hit a 3-pointer to get the Racers within 59-57 with 4:07 left. Edert followed with a 3 and a layup, and the Peacocks closed it out at the free-throw line.

Hill made five 3s for 19 points and Tevin Brown scored 14 for Murray State.