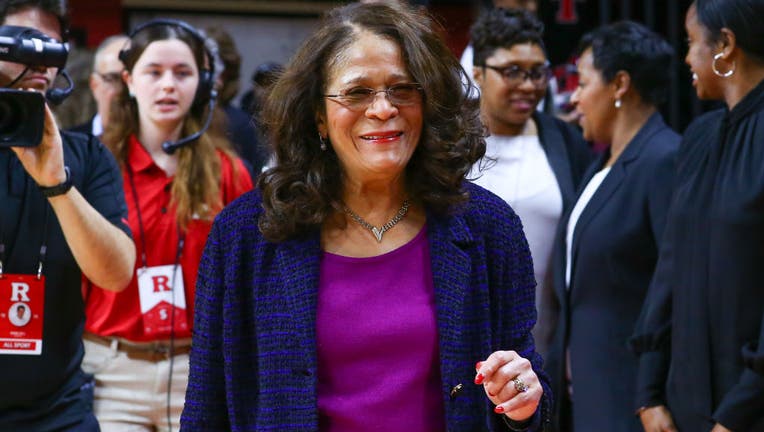 C. Vivian Stringer has been a trailblazer, serving as a role model to many Black coaches and players throughout her 50-year career.

The Hall of Fame coach announced her retirement on Saturday.

She finished with 1,055 wins — fourth all-time among Division I women's basketball coaches behind Tara VanDerveer, Geno Auriemma and Pat Summitt.

Stringer made four Final Four appearances and reached the NCAA Tournament 28 times while leading Cheyney State, Iowa and Rutgers. She was the first coach in men's or women's basketball to take three different teams to the national semifinals.

Stringer was emotional when she talked to her team Friday night on a Zoom call.

"My life has been defined by coaching and I’ve been on this journey for over five decades," she said in a statement. "It is rare that someone gets to do what they love for this long and I have been fortunate to do that. I love Rutgers University for the incredible opportunity they offered me and the tremendous victories we achieved together."

When Stringer first broke into coaching in 1971 at Cheyney State, there were no other female Black coaches to look up to for advice. She turned to friend and mentor John Chaney, who was the men's coach at the school.

"I am forever indebted to all the coaches who I worked beside," Stringer said in her statement. "Some were former players, some were colleagues, but all were friends and family at the end of the day and were my most trusted relationships.

"To the young ladies that I was fortunate to have coached and mentored into the women and leaders of today, keep pushing the barriers, keep pushing for your spot at the table, and always know who you are."

One of the many coaches who Stringer influenced is South Carolina's Dawn Staley, who won her second national championship on April 3.

"Coach Stringer represents hope for us," Staley said right before Stringer won her 1,000th game in 2018. "She hasn’t won a national championship, but she’s gotten to the Final Four with three different schools. That’s historical for us. She seized the opportunity to be successful wherever she went and she gave us an example of how to succeed with whatever opportunity you were given."

Staley tweeted her admiration for Stringer on Saturday.

"Coach Stringer thank you for elevating our game," Staley said. "The strength of your shoulders allowed us to stand tall. We will forever keep your legacy in our hearts. Thank you Coach Stringer."

Stringer has sent dozens of Rutgers players to the WNBA during her tenure, including Cappie Pondexter, Essence Carson, Betnijah Laney and Epiphanny Prince.

The 74-year-old Stringer had been on leave this past season because of COVID-19 concerns. She signed a five-year extension before going on leave last April.

Her retirement becomes effective on Sept. 1, and she agreed to an $872,988 retirement buyout. Rutgers will name its basketball court in her honor next season.

Rutgers President Jonathan Holloway said naming the court after her is "a fitting and indelible tribute to one of the greatest coaches of all time." He called Stringer "an icon" whose impact has been "felt across our campuses, around the state and throughout the nation."

Stringer has coached at Rutgers since 1995, winning 535 games. She led the Scarlet Knights to the NCAA title game in 2007 when they lost to Tennessee.

She also took Rutgers to the Final Four in 2000 after guiding Cheyney State to the first NCAA title game in 1982 and Iowa to the national semifinals in 1993.

"Coach Stringer is a titan in college basketball, inspiring generations of student-athletes and coaches to pursue excellence on and off the court," Rutgers Athletic Director Pat Hobbs said. "Her place in the history of the game is cemented, but more remarkable is the legions of young women whose lives she helped shape."

Stringer left Cheyney State in Pennsylvania for Iowa, where she elevated the Hawkeyes starting in 1983 and set an attendance record in 1985 at Carver-Hawkeye Arena. Stringer left Iowa to coach at Rutgers following the death of her husband Bill.

"There’s always a soft spot in my heart for the University of Iowa and Dr. Christine Grant for giving me my first major coaching position," Stringer said. " ... She was a strong believer in women’s rights and that’s a responsibility that I have championed and will continue to take up the fight for."

The school will begin a search for a new coach immediately. Associate head coach Tim Eatman had taken over for Stringer in her absence.

"This was the hardest decision of my life, but I thank God he has allowed me to do the thing I love most. I am ready to start my new journey and spending more time with my family, children, and grandchildren," she said. "I am truly blessed to have had so many wonderful people in my life."