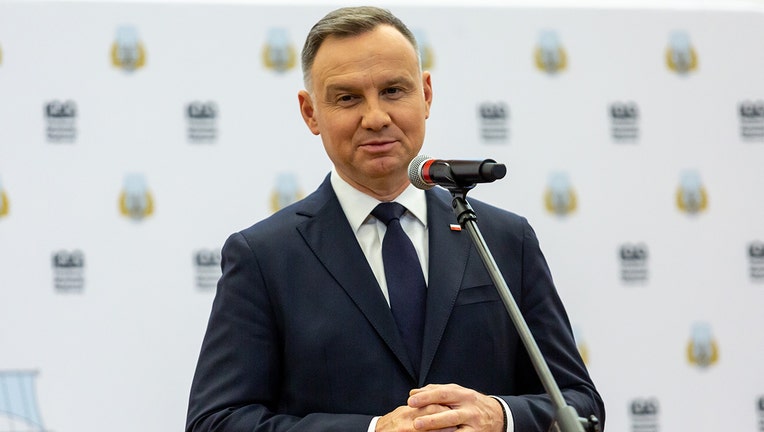 The President of the Republic of Poland, Andrzej Duda. (Photo by Dominika Zarzycka/NurPhoto via Getty Images)

WARSAW, Poland - Russian comedians pretending to be the French president tricked the Polish president, Andrzej Duda, into giving them sensitive information after a missile exploded in eastern Poland last week.

Duda’s office confirmed on Tuesday that he was put through last week to a person claiming to be France’s President Emmanuel Macron.

Duda's office said it was one of many international calls that the president received at a tense time on Nov. 15, just after a missile hit in eastern Poland, close to the border with Ukraine, killing two men. NATO and Poland’s leaders have said the missile most likely came from a Ukrainian air defense system that fired in response to a barrage of Russian attacks on Ukraine's energy infrastructure.

The office said that appropriate services are checking how the pranksters could have reached Duda — for the second time. In 2020 they talked to him posing as U.N. secretary-general.

In the new recording posted on YouTube by Russian pranksters Vladimir Kuznetsov and Alexei Stolyarov, known as Vovan and Lexus, Duda can be heard thanking a man whom he believes to be Macron for calling.

Speaking in English, Duda relays details of the missile incident, of his plans to request NATO consultations and of being very careful not to exacerbate the situation with Russia, which invaded neighboring Ukraine on Feb. 24.

Over more than seven minutes, Duda, sounding stressed, tells the caller that U.S. President Joe Biden does not blame Russia for the missile incident but that Ukraine President Volodymyr Zelenskyy insists it was a Russian-launched projectile. He says he himself is being "extra careful" not to blame Russia but that Poland will seek security consultations with all of its NATO partners.

Opposition politicians lashed out at Duda, accusing him and his office of being overly lax with security.

Opposition Left party lawmaker Tomasz Trela said it's a "disgrace for the special services and for all those who should be checking who they allow to contact the top leader."

"This is a blow for our security and for the opinion we have in the eyes of our allies," Trela tweeted.

In July 2020, the same Russian pranksters posted a recording of a phone conversation with Duda, in which Kuznetsov posed as the United Nations secretary-general, Antonio Guterres, and rendered the president speechless with questions about Ukraine, Russia and his fresh re-election. Duda's office also confirmed that recording as authentic. Two officials from Poland's mission to the U.N. were dismissed over the incident.