Russian President Vladimir Putin warned Saturday that Ukrainian statehood is in jeopardy, while Ukrainian President Volodymyr Zelenskyy made a "desperate plea" for more planes as Russian forces continued to batter strategic locations with missiles and artillery and a temporary cease-fire failed.

Sanctions from the West continued, something Putin likened to "declaring war."

Here’s a look at key things to know about the conflict Saturday:

Putin continued to pin the blame for Russia's war against Ukraine on the Ukrainian leadership, saying if they "continue to do what they are doing, they are calling into question the future of Ukrainian statehood."

But Zelenskyy urged resistance. He said Ukranians managed to keep control of key cities in central and southeastern Ukraine. In a video address to the nation, he urged Ukrainians in cities taken over by the Russian forces to fight back.

"It is a special kind of heroism -- to protest when your city is occupied," Zelenskyy said. "Ukrainians in all of our cities that the enemy has entered -- go on the offensive! You should take to the streets! You should fight!"

Thousands of Ukrainians in cities held by Russian forces took to the streets. Some climbed Russia’s military vehicles and waved Ukraine’s yellow and blue flag.

In a private call with U.S. lawmakers, Zelenskyy asked the United States to help get more warplanes to his military.

U.S. Senate Majority Leader Chuck Schumer, a Democrat from New York, said in a statement that Zelenskyy made a "desperate plea" and wants the U.S. to facilitate the transfer of planes from Eastern European allies. Schumer said he will do all he can.

The U.S. is considering sending American-made F-16s to former Soviet bloc countries in Eastern Europe that are now members of NATO. In turn, they would send their own Soviet-era MiGs to Ukraine. Secretary of State Antony Blinken, who met with Ukrainian Foreign Minister Dymtro Kuleba at the Poland-Ukraine border outside the town of Korczowa.Blinken, indicated fighter jets are under consideration.

"We are talking about and working on everything," Blinken said.

A temporary cease-fire in two key Ukrainian cities failed — and both sides blamed each other.

Ukrainian officials said Russian artillery fire and airstrikes prevented residents from evacuating the eastern city of Volnovakha, and Mariupol, a southeast port city of about 430,000. Putin accused Ukraine of sabotaging the effort. 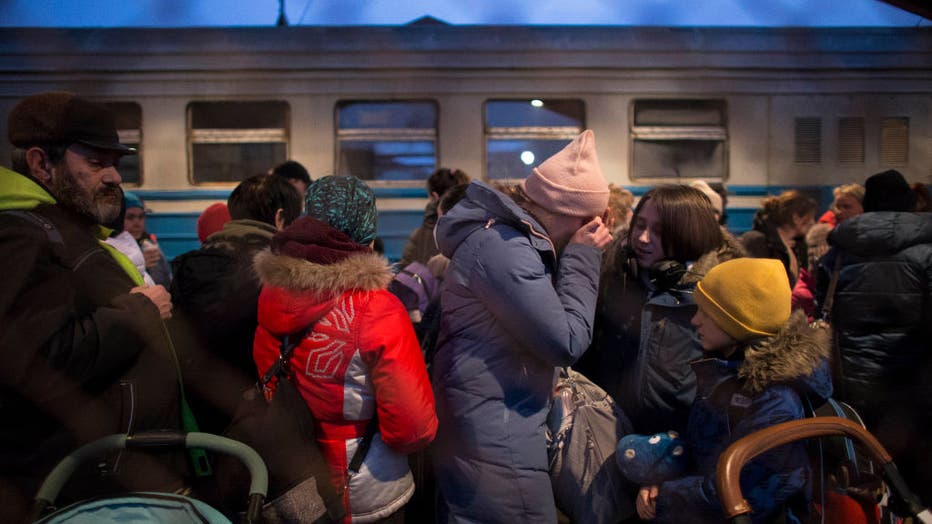 Refugee seen crying in Przemysl and Medyka on March 4, 2022. (Photo by Maciej Luczniewski/NurPhoto via Getty Images)

"The city is in a very, very difficult state of siege," Vadym Boychenko told Ukrainian TV. "Relentless shelling of residential blocks is ongoing, airplanes have been dropping bombs on residential areas."

Boychenko said thousands of children, women and the elderly came under fire as they prepared for a possible evacuation through a safe passage corridor.

Directly witnessed or confirmed by the Associated Press

In Irpin, near Kyiv, a sea of people on foot and even in wheelbarrows trudged over the remains of a destroyed bridge to cross a river and leave the city. Assisted by Ukrainian soldiers, they lugged pets, infants, purses and flimsy bags stuffed with minimal possessions. Some of the weak and elderly were carried along the path in blankets and carts.

Kyiv’s central train station remained crowded with people desperate to join the more than 1.4 million who have fled Ukraine.

Frequent shelling could be heard from the center Kyiv, the nation's capital.

What's happening on the ground

Putin’s military launched hundreds of missiles and artillery attacks on cities and other sites across the country. But a vast, mileslong Russian armored column threatening Ukraine’s capital remained stalled outside Kyiv.

Zelenskyy said Ukrainian forces were holding key cities in the central and southeastern part of the country Saturday, while the Russians were trying to block and keep encircled Kharkiv, Mykolaiv, Chernihiv and Sumy.

Video released Saturday by the Ukrainian government showed a Russian military plane falling from the sky and crashing, as onlookers on the ground cheer. Firefighters sprayed water on flames and smoke at a structure next to the debris of the plane, which bore a red star and the number 24.

Zelenskyy said Russian forces have seized two Ukrainian nuclear power plants and are advancing toward a third — the Yuzhnoukrainsk plant, which is located 120 kilometers (75 miles) north of Mykolaiv, one of several cities the Russians were trying to keep encircled Saturday.

The announcement comes after Russian troops seized the Zaporizhzhia nuclear plant — the country's largest — in the southeastern city of Enerhodar. The attack caused global alarm, evoking memories of the world’s worst nuclear disaster, at Ukraine’s Chernobyl.

As the war intensifies in Ukraine, and Russian troops have taken control of Europe's largest nuclear plant, Michael O'Hanlon talks about the strategic decisions being made by both sides and the impact their actions have on the world.

Getting back to the negotiating table

A third round of talks between Ukraine and Russia will be held Monday, said Davyd Arakhamia, head of the parliamentary faction of Zelenskyy’s Servant of the People party and a member of Ukraine’s delegation at the talks.

He didn’t give further details, including where they will take place. The last round was held in Belarus.

In Chisinau, the capital of Moldova, hundreds of families took refuge in a sports venue. The refugees milled about or tried to relax on cots while lamenting what they were forced to leave behind.

Ukrainians also fled to Siret, Romania, where Romanian President Klaus Iohannis promised to help them. He said no Ukrainian would be denied entry to his country and pledged food, clothing, transportation and help with personal documents.

The International Organization for Migration says the number of people who have left Ukraine since fighting began has now reached 1.45 million.

The U.S. is considering a request for $10 billion in emergency funding for humanitarian aid and security needs.

Russia has acknowledged that nearly 500 Russian troops have been killed and around 1,600 wounded. Ukraine has not released casualty figures for its armed forces.

Zelenskyy said that 10,000 Russian troops were killed in the 10 days of the war, a claim that could not be independently verified.

The U.N. human rights office says at least 351 civilians have been killed and 707 wounded in Ukraine since the start of the invasion. The rights office uses strict methodology and only reports casualties it has confirmed. It said Saturday it believes the real figures are considerably higher.

Ukraine’s State Emergency Service has said more than 2,000 civilians have died, though it’s impossible to verify the claim. More than 840 children have been wounded in the invasion, and 28 have been killed, according to Ukraine’s government.

Blinken was in Poland to meet with the prime minister and foreign minister, a .a day after he attended a NATO meeting in Brussels in which the alliance pledged to step up support for eastern flank members.

In Moscow, Israeli Prime Minister Naftali Bennett was meeting with Putin at the Kremlin. Israel maintains good relations with both Russia and Ukraine, and Bennett has offered to act as an intermediary in the conflict. No details of Saturday’s meeting have yet emerged.

Meanwhile, the U.N. Security Council will hold an open meeting Monday on the worsening humanitarian situation in Ukraine.

Singapore announced sanctions against Russia, becoming one of the few governments in Southeast Asia to do so. The tiny city-state imposed controls on exports or transshipments of military-related or dual-use items considered "strategic goods."

Spain’s Teatro Real, one of Europe’s major opera houses, said it is canceling a set of upcoming performances by Russia’s Bolshoi Ballet.

Aeroflot, Russia’s flagship carrier, announced that it will halt all international flights except to Belarus starting March 8. That follows a warning by Russia’s aviation agency that airlines with foreign-leased planes risk their aircraft being impounded as part of Western sanctions.